More new details about the game pour out. 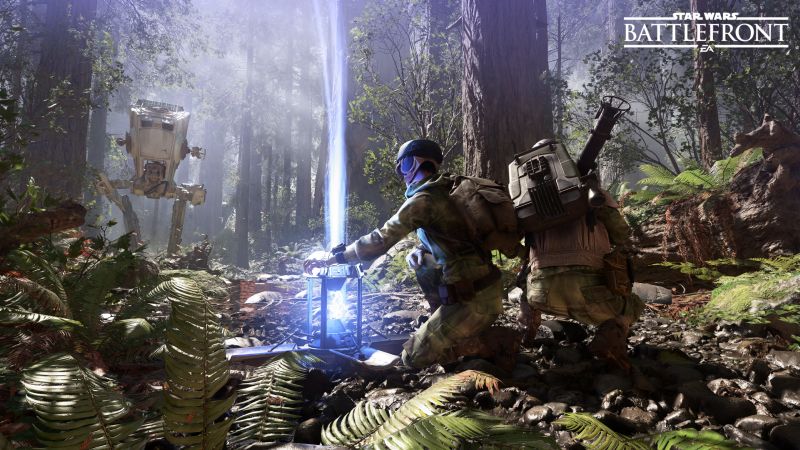 Following a somewhat divisive information reveal a while back, EA and DICE have seemingly been constantly on the back foot, defending the decisions their making with Star Wars Battlefront. Because of this, they’ve had to divulge more and more information to keep the masses appeased. They’ve recently revealed that Battlefront will not enjoy the same level of destruction as is present in the Battlefield series of games.

Speaking about this, Community Manager Mathew Everett has said, “Overall the team is using destruction where it makes sense and is also making sure it stays true to the Star Wars universe. While there is some destruction in the game, Battlefront will not feature large-scale destruction like you see in Battlefield. Trees and other select environmental objects will take damage etc.”

He goes on to say that weapons should be authentic, “Our team is working to make every type of weapon as authentic to the Star Wars universe as possible.” and that vehicles like the Y-wing and TIE Bombers will not be unlocked via Kill streaks, though it seems that there are conditions, “These are not things that are unlocks from killstreaks. We will reveal more details soon.”

Also recently confirmed, was a new gameplay mode called Fighter Squadron. Design Director Niklas Fegraeus said, “You could see a tiny snippet of this in our trailer where you saw the Fighter Squadron mode, where you engage in huge Starfighter battles over canyons big enough to be truly epic.”

On the visual side of things, Level Artist Daniel Cambrand has said that DICE’s FX Artists have nailed down the explosions and smoke effects, saying, “Our FX people have really captured the feel of the Star Wars explosions and smoke. In terms of Frostbite, we are now using PBR (physically based rendering) which makes the materials appear more accurate. Stone looks like stone, and metal looks like metal, in any environment you put it in.”