Is the force strong with these boards, or are they destined for the dark side?

The newest pack to Pinball FX2 is the Star Wars set. The pack comes with three boards; Clone Wars, Boba Fett, and Episode V: Empire Strikes Back. Each board is completely unique based on their themes and their quality are all top notch.

The Clone Wars board is based on the CG animated series currently running on cable. There is a 3D character model of Anakin on the left ramp of the board and if you work hard enough his apprentice joins on the right ramp. The board is laid out well and it is quite easy to rack up a good score. The artwork on this board is actually better quality than Zen’s Classic boards. 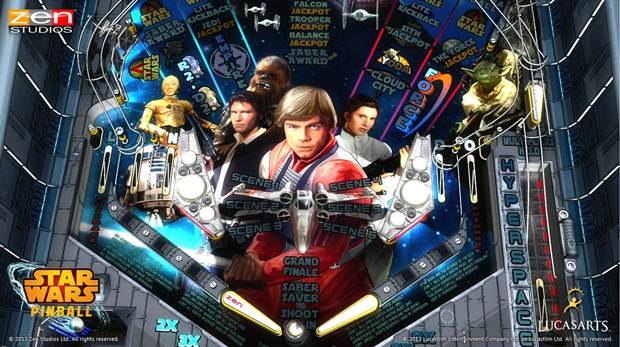 The Boba Fett board is obviously based on Boba Fett, the bounty hunter sent by Jabba the Hutt to track down Han Solo. A 3D character model of Boba Fett stands on the right ramp, and as you keep working he flies to the left ramp and back. Although pretty cool, it is actually pretty distracting. Overall I found the layout to not work as well as the other boards. You have an extra flipper on the left side that is angled in such a way that it is quite easy to shoot the ball straight across to the other side of the board, and directly into the gutter. Although the artwork is also well done, down to a Han Solo in carbonite spinner, the board is a little harder to read. I was surprised to find that despite it being hard to understand how I needed to score, my highest scores came off the Boba Fett board.

The Episode V: Empire Strikes back was the best of the three. The board is laid out with more 3D models, include Darth Vader. With the board being more open, it is easier to read and so hitting objectives are more comprehensive. The highlight is when you unlock the scenes. There are 6 different scenes to choose from, all the way from landing the Millennium Falcon, to attacking 3D storm troopers. There are a few traditional metal ramps, but on the far left side is Luke Skywalker’s first lightsaber, that emits a blue beam as it becomes a ramp. Since it is an easier board to read and understand, I played this board more, even though I scored higher on the other boards. 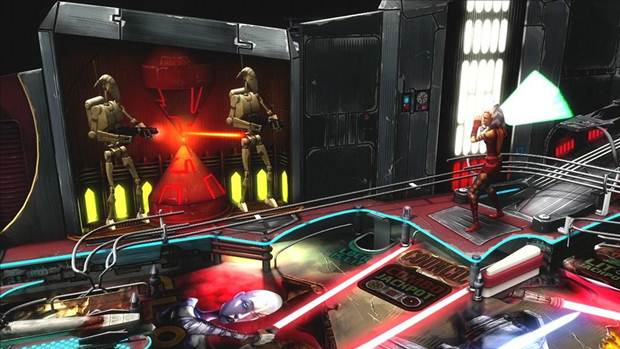 There are only a few minor issues to these boards. The biggest issue comes more from the confusion of why these boards have such non cohesive themes. Overall they are all Star Wars themed, but it would have probably made more sense if there were three board based on Episodes IV, V, and VI. Or you could have made three themes based on main characters like Luke, Han, Yoda. I’m not against Boba Fett, but he originally was a secondary character. Of course he was such a bad ass that he’s been revisited numerous times, so I don’t want to say he doesn’t deserve a board. It would just make a little more sense that if there are only three boards, I’m not sure he should have been a top pick. That being said, I also think that since Episodes I, II, and III would have more cohesive but it would be really nice to just forget those movies. The only saving grace is the Clone War animations.

The other issues come down to how hard it is to read some of the boards. The 3D models are cool, but Boba Fett flying around the board is completely distracting. Luke’s lightsaber is also pretty cool, but it’s so bright and becomes so encompassing, it’s hard to see the ball roll down the lightsaber and again it becomes distracting. If some of these boards were dumbed down a bit, the boards would be easier to read and more enjoyable to play.

Some boards have non cohesive themes.

Final Verdict:
SUPERB
Pinball FX is pretty fun already. It’s a simple concept and as long as there are new boards, the game can always feel fresh. The Star Wars universe is so vast that these three boards should be able to please everyone. It would be nicer if the boards actually went towards the classic movies instead of secondary characters, even if they’re badass bounty hunters. The boards are also a little cluttered making it sometimes hard to read the objectives, but overall the quality on these boards are better than the Zen classics and still worth checking out.
A copy of this game was provided by Developer/Publisher/Distributor/PR Agency for review purposes. Click here to know more about our Reviews Policy.