Unlimited carnage in a authentic 90’s style. What could possibly go wrong?

Posted By Alex Jackson | On 10th, May. 2017 Under Article, Reviews | Follow This Author @teh_jackson

The cross-section of first person shooters through the ages shows us a long, strange, winding road trailing behind the genre as we currently understand it. It was originally a style hacked together through illusions, duct tape and bubble gum, and has since evolved and exploded into the modern gaming mainstay it currently is. As a far newer phenomenon in gaming, the Rougelike removes the kind of permanence that you can eventually learn to expect from a shooter, like spawn points for enemies and weapon locations. Enter STRAFE, which blends together Rougelike sensibilities with the granddaddies of the classic arena shooters like classic DOOM.

The gameplay loop feels familiar to anyone who’s enjoyed those classic PC bloodbaths, including that fantastically smooth movement, enemy variety to mix and match many scenarios, secret walls packed with goodies and hidden monster closets to surprise you. STRAFE sticks surprisingly close to the source material in some very key ways, but falls more flat in others.

STRAFE has a limited pool of weapons to arm yourself with at the start, with a shotgun, automatic rifle and a rail gun. All are functional but lack the imagination held by the games inspiration. Upon grabbing one and making your way into the depths of the randomly generated Icarus space station to wade through the legions of enemies you might find the occasional alternate weapon, with some fun effects, to use for a time until the ammo runs dry. 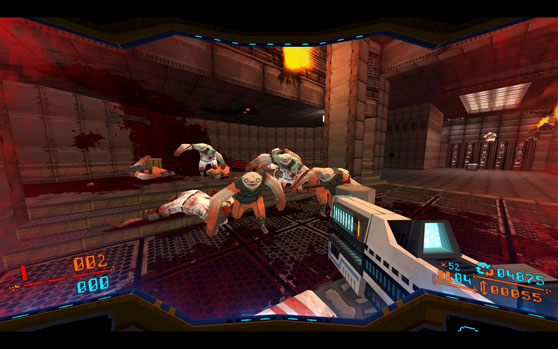 "The gameplay loop feels familiar to anyone who’s enjoyed those classic PC bloodbaths, including that fantastically smooth movement, enemy variety to mix and match many scenarios, secret walls packed with goodies and hidden monster closets to surprise you."

Weapon mod pickups litter the stages and boost the effectiveness of your arms, but never drastically change their function. Each weapon has an alt fire that expends a lot of ammo in exchange for a quick exit from a bad situation, for example the rifle firing a grenade. Dispersed sparingly throughout the levels are machines to trade in acquired scrap currency to replenish your shields or ammo. The scarcity of the machines and pickups create tension and interesting player decisions where you don’t know when the next machine will be, but perhaps you’ll have saved up enough for the life saving ammo by then.

If you manage to survive until the end of the stage, you’re greeted with stats not dissimilar to classic DOOM, taunting you about your completion percentage and how much of the level you uncovered. Secrets are hidden around every corner, but also traps. You’re encouraged to seek them out for the possible benefit they bring to the run, but the possibility of it being a monster closet is always in the back of your mind. With so little health hanging around, I never felt that the reward was worth the risk and rarely sought them out, choosing to simply survive.

Fantastically implemented orthogonal enemy design in DOOM helped create readable situations that the player could appropriately react to, and while STRAFE tries to emulate that it doesn’t fit together quite as nice. The primary enemies you’ll be dealing with are little mutants who hobble into melee range and can easily dog pile a reckless player, encouraging players stay on the move, while others show up less infrequently but don’t differentiate themselves to the degree they probably should have. 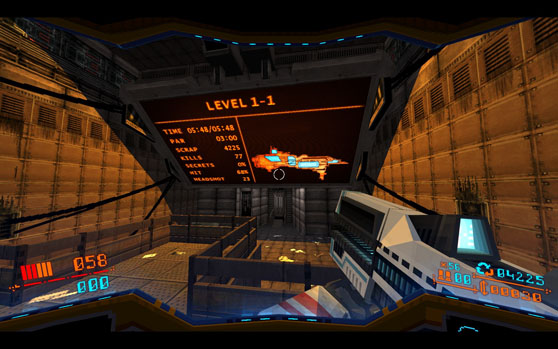 "The combat and gameplay loop is asking me to get reckless and take foes head on, but the non-permanence of the game and scarcity of health pickups asks me to be careful."

Most of the enemy types have a variation of “pursue and fire projectile weapon” as their standard game plan, which doesn’t really flex the players ability to adapt to different situations, so much as repeatedly come up with a fresh solution to the same problem. Given the random nature of the game, it would be silly to include a bunch of enemies with hitscan weapons that would just punish the player for being seen, but the current lineup doesn’t offer much in the way of interesting combat.

In all, i’m not sure how well the Rougelike elements mix the style of combat STRAFE goes for. The first person perspective was occasionally limiting and I was caught off guard back peddling into a mob or some randomly generated fire on more than one occasion, and frequently met my end without really feeling like I had control over the situation. The combat and gameplay loop is asking me to get reckless and take foes head on, but the non-permanence of the game and scarcity of health pickups asks me to be careful. I feel like a balance could have been reached by taking a leaf from DOOM 4 and rewarding health for skillful play, but that was not a direction they went in.

Effort was clearly spent with making the presentation pop with a fantastic 90’s flair and style, in a cohesiveness that isn’t often seen. The boxy models and environments thankfully don’t clash with a smooth gameplay experience and feel entirely like something lifted right off the PS1. Things are immediately identifiable, when you see them to begin with, and employ a wider colour palette to separate the enemies from the environment in service to the gameplay. 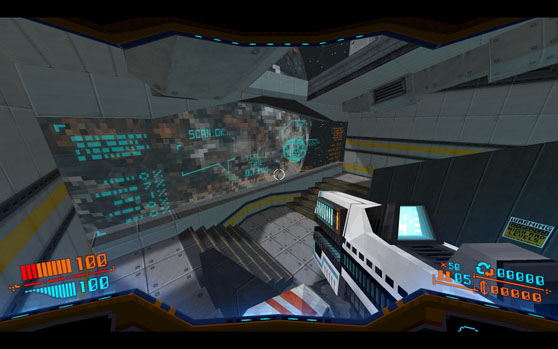 "Death screens taunt you with how you died, how much scrap you had and how much viscera you left around the space station."

Death screens taunt you with how you died, how much scrap you had and how much viscera you left around the space station. Visually it all pops with a nostalgic touch that modernizes in the right places to feel like a chosen style, and not lazy design.

Sound design wasn’t handled quite so well, with limp sound effects limiting how punchy the weapons feel and a backing of the most generic techno i’ve probably ever heard didn’t get my blood pumping like that thrashing guitar of DOOM or Quake. Enemies barely make a sound outside shooting, leaving sight as your only indication of where they might be. Your avatar barely reacts to being hit and doesn’t give off an indication of where the damage came from, frequently leaving me scrambling for the location of my assailant.

There is fun to be had, but STRAFE is more than a little schizophrenic and divisive, and i’m not completely sure if the marriage between the Rougelike and the classic shooter is a completely sound one, or at least as its presented in this game. It’s cohesive vision for its presentation brings a competently, if not magically put together game to life enough to get a lot of enjoyment from wandering the halls of Icarus.

Strafe goes all in on an authentically cheesy 90's style and nails the look of that era without bringing the old frustrations forward with it.

Sound design lets down a lot of the atmosphere the game wants to go for, leaving guns sounding weak and making for some cheap attacks from mobs that snuck up on you. The Rougelike elements undermine looking for secrets when you can be punished just as easily as rewarded for looking.

STRAFE gets a lot of presentational things right, and even though it undermines and contradicts its own mechanics in some places, the singular sense of style the game exudes is fantastic. Running through the swarmed halls of the dilapidated space station has a lot of appeal for classic shooter fans.

A copy of this game was provided by developer/publisher for review purposes. Click here to know more about our Reviews Policy.
Tagged With: Devolver Digital, DOOM, first person shooter, rougelike, Steam