Strange Brigade is Rebellion Developments’ next big game and it improves upon several aspects that Sniper Elite 3 introduced to the game’s engine early last year. Just like Sniper Elite 3, Strange Brigade specializes in an intriguing level design and although it doesn’t follow the true sandbox structure of Sniper Elite 3, it does manage to deliver wide open levels along with spectacular draw distances.

As soon as you boot up Strange Brigade, the very first thing you will notice is the lighthearted presentation. This isn’t restricted only to the user interface but is also felt in the game’s various character models and narrative. Being a co-operative experience at heart, Strange Brigade allows players to select four characters of their liking, each with their own traits and hilarious walking and running animations (except the climbing animation which looks damn awful). It seems that the developers purposely included such animations in order to add to and build upon the game’s humor value. What’s more? The entire game is narrated by an intriguing voice actor who will call out players for their in-game actions. The game is going fo a very offbeat presentation and it works really well with the theme Strange Brigade is aiming for.

As noted earlier, being a Rebellion game, Strange Brigade excels in its level design and this is further backed up by good art design. Strange Brigade takes place in 1930 and as a member of the “Strange Brigade”, the players have to eliminate Seteki, the queen of Sahara Africa who was pretty brutal to her subjects. The developers have opted for a wide variety of art choices which is reflected in the mummified NPCs, skeleton enemies and various creatures like scorpions. Once again, the game tries its hardest to present each aspect of its challenge in a unique way. For example, enemies are introduced through a short cutscene whose styles will immediately remind you of the Borderlands series.

Another improvement comes in the form of improved crowd rendering tech. Strange Brigade has around 40-50 enemies on the screen most of the times and possibly about a hundred in some cases but the engine didn’t drop a frame in our experience. Furthermore, Strange Brigade adds a bit of player agency allowing them to initiate several different kinds of traps and cause explosions in order to take down a number of enemies at once. The particle and alpha effects such as fire caused by this action isn’t out of this world but it gets the job done and I guess that’s okay.

Furthermore, the textures on the character models for the most part is fine but the texture quality on environmental objects isn’t all that great. Some low budget textures can be spotted in several places and texture filtering can be mediocre at times. The anti-aliasing solution doesn’t work well on distant objects giving the game a blurred look and this kind of hurts the immersion. Overall, Strange Brigade feels like a title that prioritized fun gameplay, intriguing level design over hardcore graphical parameters and given that this is more of a AA game, the results are pretty much what you expect. 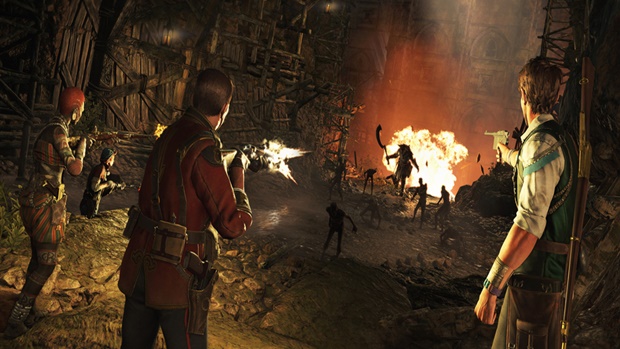 Strange Brigade on the PS4 Pro and Xbox One X is an interesting case to analyze. As revealed to GamingBolt in an interview with the developers, both versions offer improved shadow resolution, larger draw distance, higher quality texture filtering over their respective base versions. However, there is a difference in image quality between the PS4 Pro and Xbox One X versions. Sony’s machine renders the game at 1440p resolution and Xbox One X runs Strange Brigade at 1800p. However, Sony’s machine also allows the player to choose between two frame rate options: run the game at a locked 30fps or at unlocked frame rates.

Now, there is a down and an up side to both of these options. In locked 30fps mode, the frame rate is pretty stable but the image quality for some reason suffers a lot, resulting into jaggies. On the other hand, running the game at an unlocked frame rate on the PS4 Pro not only results into higher but inconsistent performance but the image quality is drastically improved, resulting into a smoother and cleaner presentation. We are not sure why an option related to frame rate is impacting image presentation but this effect is there, at least at the time of capturing the PS4 Pro footage. The Xbox One X version, however, doesn’t even have a frame rate option. The image quality is already better than the PS4 Pro version and performance is pretty stable with next to no frame rate drops. It’s a complete no brainer then, Xbox One X provides players with a definite gameplay experience thanks to its clean presentation and superior image quality.

At the end of the day, Strange Brigade provides a rather different experience compared to what fans are used to with Sniper Elite and Rebellion. With fun filled co-op mechanics, some interesting and hilarious dialogues and solid gun play, Strange Brigade isn’t the kind of game you would play for its visual prowss. However, if you are a tech savvy gamer than we will recommend the Xbox One X version over PS4 Pro thanks to the former’s sublime image quality and resolution.