Posted By Kartik Mudgal | On 16th, Jan. 2012 Under Reviews | Follow This Author @KartikMdgl 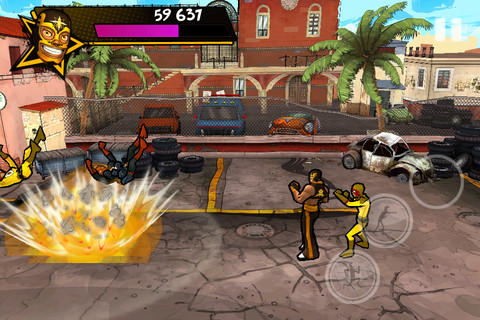 Street Wrestler gives a good first impression. It feels like the developers have put a lot of effort into this, and I really love the cell shaded visuals. Think of Borderlands, when it comes to the graphics; it looks like that. The art design, especially in the first level, where you run past a car graveyard is surprisingly pleasant.

The visuals are the main reason, the game feels polished. It’s the first thing that catches your eye, unlike the other iOS games out there. When you start the game, you have the option of picking your character from the available four. One of the is locked for some reason, but all of them are well designed.

This beat ’em-up delivers if you have an iPad, as the screen really makes the graphics shine. One of my main problems with such games, you know, where you have to control the character is the on-screen buttons. They make the gameplay terrible and uncomfortable. It’s the same thing here for me.

The virtual analogue button can be situated anywhere on the left side of the screen, so you can hold anywhere on the left as you please and control your character, but unfortunately that doesn’t make it less annoying. The slippery feeling that the iPad’s gorgeous screen gives, ruins the experience a bit when you want to proper control. There are three more buttons on the right, which makes the character punch, do a sliding kick and jump. 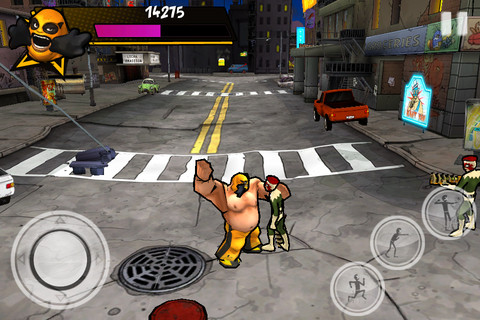 There are a lot of enemies here; some of the throw grenades, or just surround you. The bosses are well designed as well, and are a little tough to beat. Once you complete a level, which is usually short. Your performance is rated, like the 90% of iOS games out there. Okay, I’m exaggerating but yeah.

It has to be mentioned that Capcom’s Street Fighter is available on the iOS as well. So if you want some authentic, over-the-top beat ’em-up, you know which one you should spend your money on. But Street Wrestler isn’t that bad either, as there are plenty of levels and things to do here. Shame about the controls though, but I guess it’s a hardware problem, so I can’t really blame the developer here.

If you want some variety in your iOS collection, then this game will entertain you for a while, but don’t expect it to provide any in-depth gameplay experience. Once you get used to the controls, you can get a lot of time out of the game. The graphics make it a little bit easier to play, though. I played this game on the iPad 2, and I have to say, the big screen provides a superior experience here.

The game was reviewed on the iPad 2.

Controlling the character can get a bit iffy. The gameplay is a little shallow.

If you want some variety in your iOS collection, then this game will entertain you for a while, but don't expect it to provide any in-depth gameplay experience. Once you get used to the controls, you can get a lot of time out of the game.

A copy of this game was provided by developer/publisher for review purposes. Click here to know more about our Reviews Policy.
Tagged With: chillingo, street wrestler