Does this game do justice to the previous space combat games?

It’s a good feeling when a game that you craved for a long time becomes a reality. Strike Suit Zero gives space combat aficionados something new to chew on and considering its birth via crowed funding where a lot of people expressed interest in the project, I think after playing the game for some time, it’s fair to say that it can be added to the list of Kickstarter hits.

Look, let me get this out of the way. The learning curve is pretty high here; don’t be surprised if you struggle with the controls especially while using a gamepad.

The game starts with a nifty intro explaining the backstory and why the hell you are fighting and what’s the motivation behind the whole thing. Turns out, people are pretty possessive of what they have and won’t hesitate to take something that you have either. Yes, that’s the basic premise of the whole thing–just expand it into the star system where people wage an intergalactic war because they disagree with each other with formidable technology. 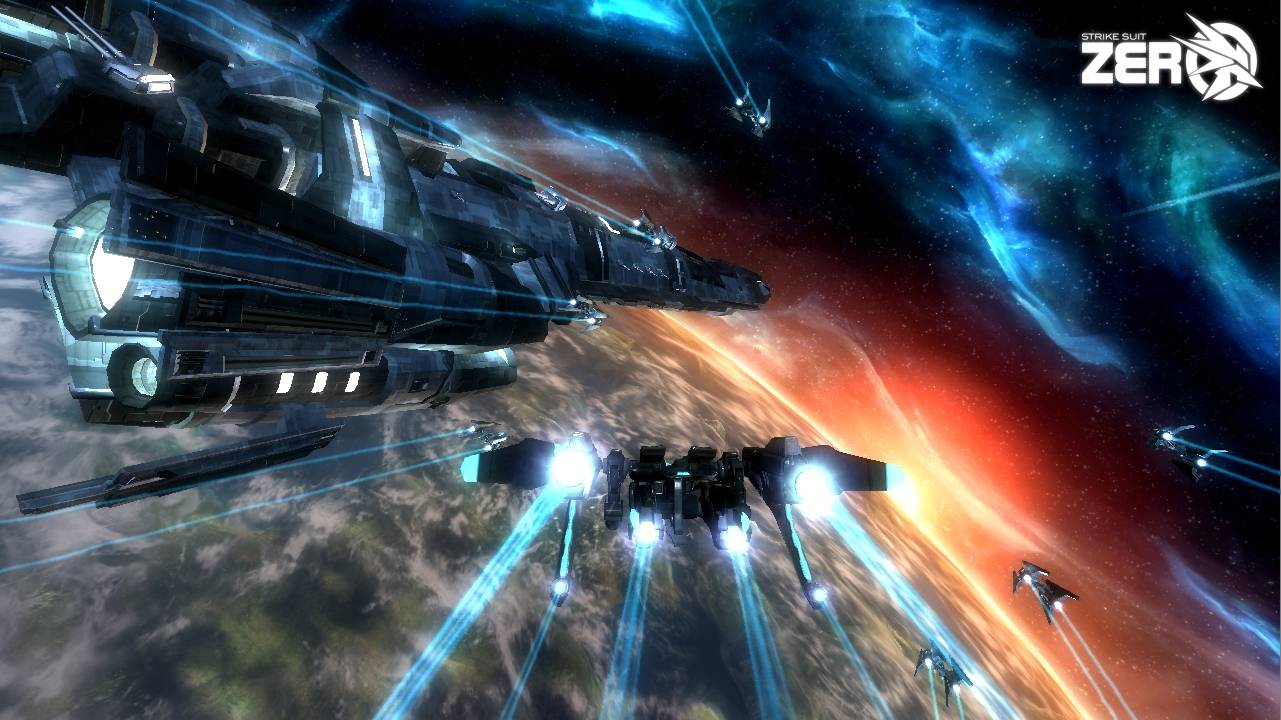 Err, so when you finally get control of your initial ship, there will be a minor tutorial where you’re taught how to fly the thing, including boosting and firing weapons. I recommend you to get the hang of the camera and increase sensitivity in the options menu because the default settings are way too slow if you use the gamepad. The game recognizes the Xbox 360 controller for Windows pretty easily and you don’t have to go out of your way to make it work.

You must have seen those pre release screenshots of a badass robot firing missiles piercing piercing through space like butter, right? If not, I highly recommend to connect your PC to your TV and enjoy this game on a big screen. That’s how I believe it should be enjoyed if you’re using a gamepad as well.

The visuals are stunning, but look at bit unpolished. The ships do have as much detail as they should and there’s a cockpit update coming on later to the game, which is a bit bewildering because I really love to play it with the first-person camera. There are reasons for that. The controls aren’t that confusing in first-person view and you can soak in all the lovely art design of the game which really gives an impression that you’re actually battling in space. 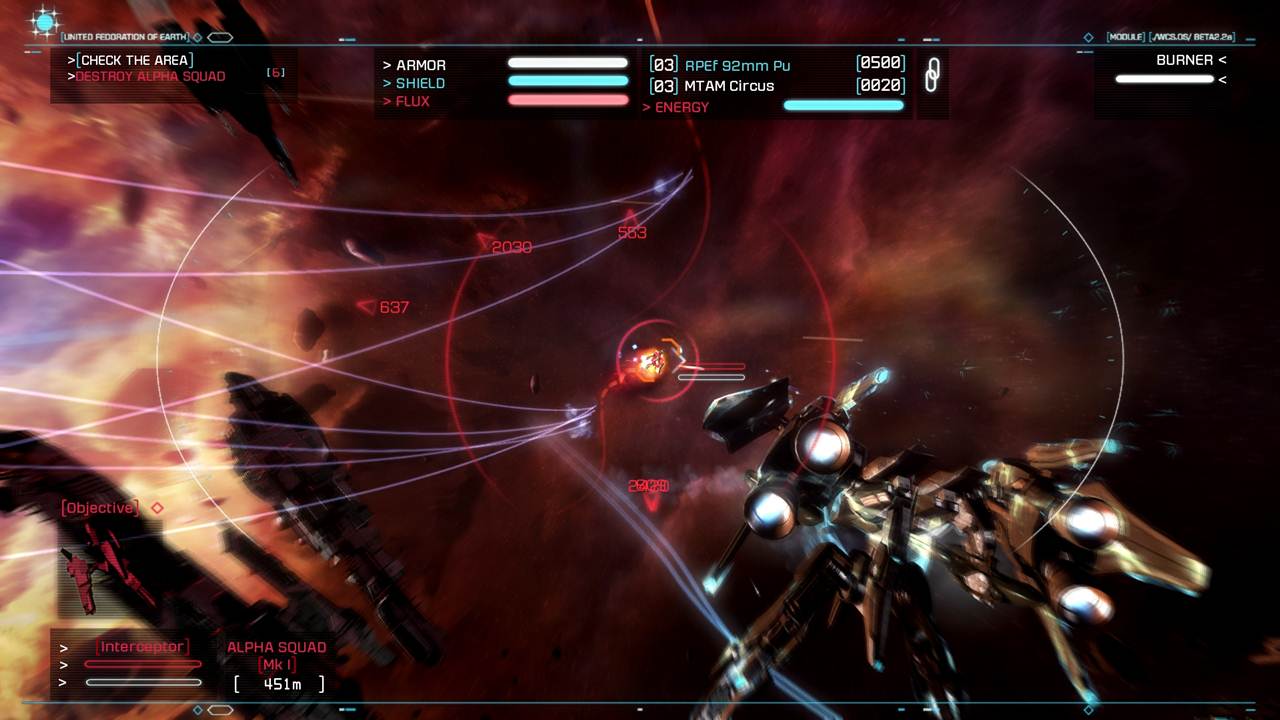 The Strike Suit–which is a ship in the game–also has the ability to transform into a mech with a lot more firepower at your disposal and after killing a bunch of enemies you get the option to turn. The handling in mech mode is a bit different but it just works, so no complaints there. There are a lot of weapons and abilities at your disposal including things like EMP to shake off pursuing craft.

The combat will be a bit difficult if you don’t know what you’re doing. You can lock onto enemy crafts which will be numerous in numbers, but if you want to use the old fashioned cannons, there is a circular area marked before enemy crafts where you can fire your shots. It’s called leading your shots and considering enemies attack you from everywhere, you really need to learn how to control your ship well.

There are a lot of missions available and some of them can be incredibly difficult because if you die before hitting a checkpoint, it means doing that part again which honestly can get a bit irritating. Checkpoint system is an archaic design and should not be used in PC games, as it is artificially used to increase game length. I had a bunch of issues with it but honestly the point here is to know how your ship controls and how to engage enemies and dogfight them into oblivion  If you get these basics right, you really won’t have an issue with dying unnecessarily. 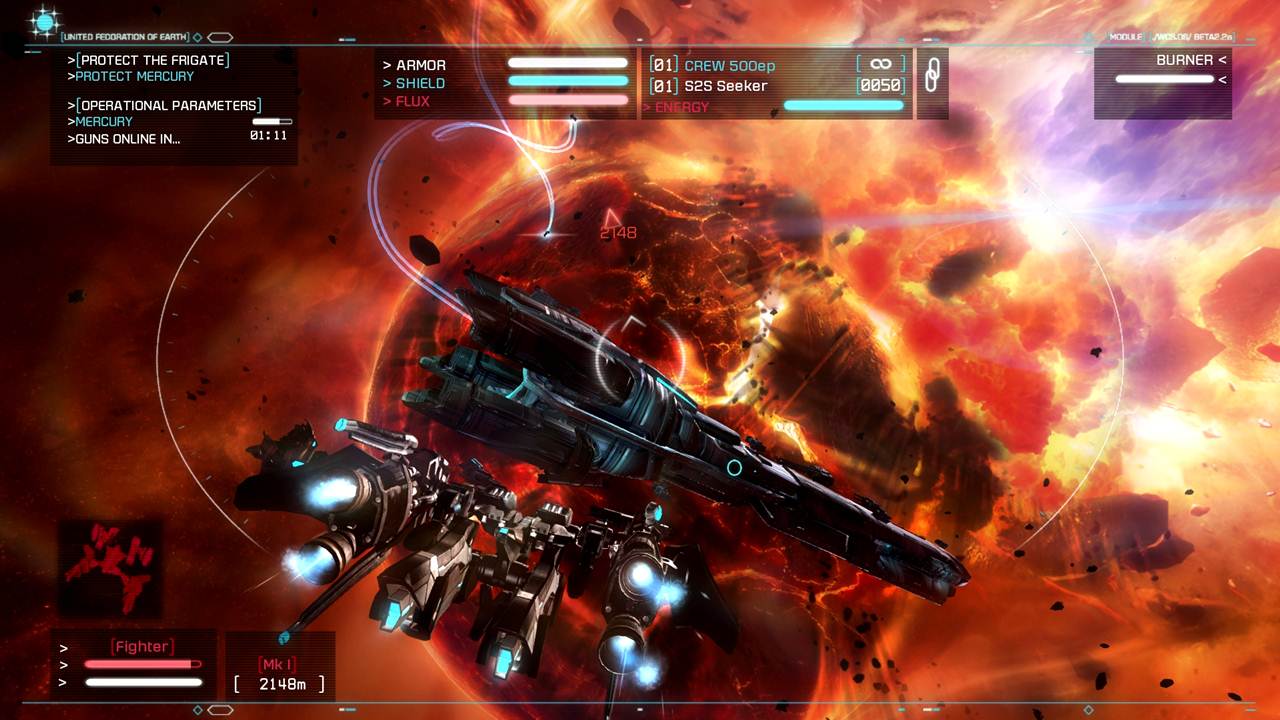 There are quite a number of ships available in the game. The first one you get is sort of underpowered because you will keep dying unless you know how to engage enemies properly. However, once you get the Strike Suit later on in the game, it becomes far more easier to take out batches of enemies. I really hope people don’t stop playing the game because they got their ass kicked early on because it gets better.

There are issues with the game. It’s unpolished, game design could have been a bit sensible, there could have been more variety in combat scenarios  but at its core it’s a game made by developers who wanted to revive a genre no one wanted to touch. Strike Suit Zero could have benefited from minor tweaks before release, however, if the developers are aggressive in patching the game and adding more functionalities and features, this could really turn into something special.

The visuals look great. Space combat can be exhilarating. Lot of firepower at your disposal.

The camera and controls can prove to be frustrating when using a gamepad. The game is unpolished. Checkpoint system is a pain.

There are issues with the game. It's unpolished, game design could have been a bit sensible, there could have been more vareity in combat scenarious, but at its core it's a game made by developers who wanted to revive a genre no one wanted to touch.

A copy of this game was provided by developer/publisher for review purposes. Click here to know more about our Reviews Policy.
Tagged With: born ready games, pc, Strike Suit Zero