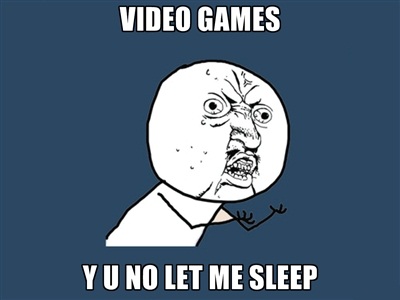 A recent study by Australia’s Flinders University has shown that if you play video games for 50-150 minutes before going to sleep, your sleep pattern can be disrupted.

The study, which was supervised by Dr. Michael Gradisar, tested 17 teenagers playing violent video games for 50-150 minutes before they went to sleep, and the ones who played for two and a half hours showed a 27 minute loss in their sleep and a 39 minute delay in sleep onset.

“While they went to bed at their regular bedtime,” said Dr. Gradisar, “the adolescents’ still experienced significant sleep disruptions caused by frequent awakenings throughout the night.”

REM, also known as “dreaming sleep”, also gets effected, according to the study- it was reduced by 12 minutes for those teens who played for 150 minutes. “This may not seem like a significant reduction,” said Gradisar, “but REM plays an important part in helping us remember content we learnt that day so for adolescents in their final years of school who are revising for exams, winding down at night with a video game might not be the best idea.”

However, teens who played for 50 minutes had more or less zero effects on their sleep cycles. It took them about 22 minutes to fall sleep, which is how much it should take at their age. Those who played for 150 minutes, however, had their sleep onset delayed to 39 minutes, almost double.

It’s also important to note that this study doesn’t take the content of the game into account- be it as violent as God of War or as charming as Kirby, only the effects are being studied.

“The aim of this investigation wasn’t to assess the content of video games but to look at the effect of the worst possible thing to do before bed because at the end of the day we want to better understand what affects adolescents’ sleep,” Gradisar explained. “At the moment, less than one hour seems okay.”

That’s it. No more FIFA before I go to bed.