Like anything in the industry, stealth games have been a progression of design. Realistic light sources, and hushed footsteps were incredible feats in the mid-90’s. Standards rise, as do expectations, and only the presentation of new ideas can keep something afloat. The relatively new PS4 and Xbox One consoles are still gaining new titles, but unfortunately, this game is anything but new.

Styx: Master of Shadows is a prequel to 2012’s Of Orcs and Men. For this release, Cyanide Studios departs from the action RPG to produce a traditional stealth game, one that sweeps together all the clandestine conventions of past success. This collaboration offers no surprises, and ultimately fails to argue a purchase. It is too familiar, too often.

Styx is not terribly fun to play. There are many things responsible for it’s deflation, but the macro fact is that there is no great reason to play it. For every unoriginal design there are five buggy visual interruptions. For every five bugs there are ten frustrating checkpoint resets. Other facets like sound design, and narrative are there, but neither are remarkable. 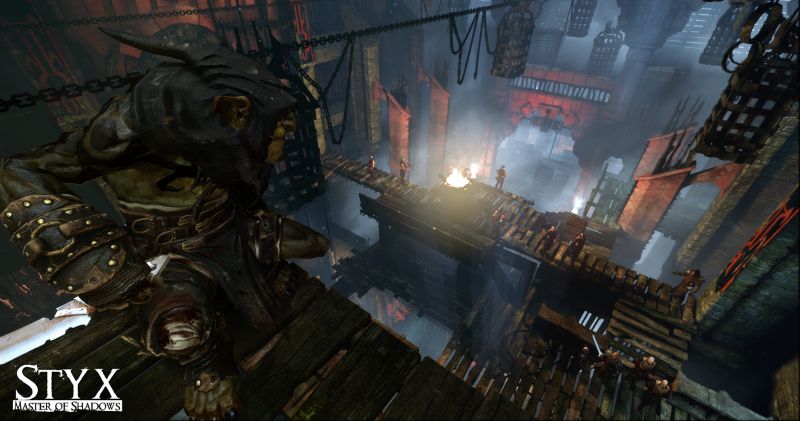 "It is too familiar, too often."

You take on the role of Styx, a goblin who’s equal parts sneaky, and snarky. You guide his plunder of the Tower of Akenash, a massive structure housing unionized humans, and elves who guard a magic tree, and its coveted sap of Amber. The politicized possession of the sap, and glares of goblin bigotry don’t hide the by-the-numbers fantasy stage. Somewhere between the Dungeon Master’s Guide and the Monster Manual, Styx checks every otherworldly box to unflattering effect.

The low production cut scenes and occasionally forced dialogue do little to engage its audience, and the villainized defendants of the Amber hardly seem worth butchering. The attempt at making Styx an anti-hero falls into the question of who the real enemy is. Between his angsty f-bombs, fart jokes, and constant widow making, Styx feels like a real jerk, one who repels cheerleading.

With a well-visited fantasy world, one would hope the gameplay might land on new shores. It doesn’t do this, and underperforms on genre contrivances. Excluding the unpredictable AI, the main enemy here is the light. Our goblin friend can snuff torches by hand, or toss wet sand to extinguish at a distance. As long as you are standing in darkness, you are free to assassinate your adversaries with a noisy quick kill or elongated quiet kill. Heard this one before? How about ‘Hold to pick lock,” or “Press to look through keyhole”? 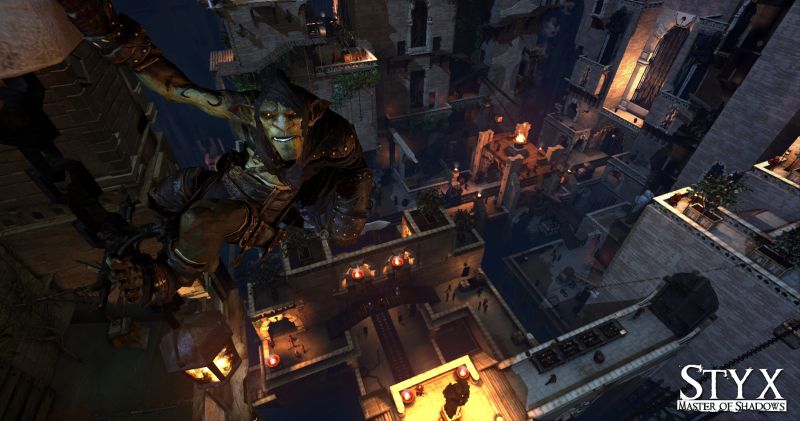 You have played this game already. At some point in your gaming career you have played and enjoyed an element of Styx in a different (likely more entertaining) title. The inclusion of platform elements is welcome, but feels underutilized and derivative. These familiar tropes are tossed into big environments that ask the player to cut their own route to the next objective. This can be fun occasionally, but often times it felt that there was one clear path for success and the rest was peripheral or outright divergent. While the environments mock vastness, the same cannot be said about the gameplay toolkit. An upgrade system allows you to slot points into different categories, but you will spend most of your time killing the lights, and slitting throats. The ability to clone yourself proves useful when required, but is unhelpful beyond a brief area scouting.

Maybe it is okay that Styx lacks an infinite holster of death, because his AI counterparts are slack-jawed quitters. When one of them catches the scent of danger they do everything in their power to stop the threat, e.g. they leisurely pace toward the clue, gawk, and turn 180-degrees and return to thinking deeply in a fixed position. The more athletic guards will strut highly telegraphed patrols that you can comprehend in a matter of moments. The difficulty spawns mostly from the player getting too cocky and discrediting the bloodthirsty AI. 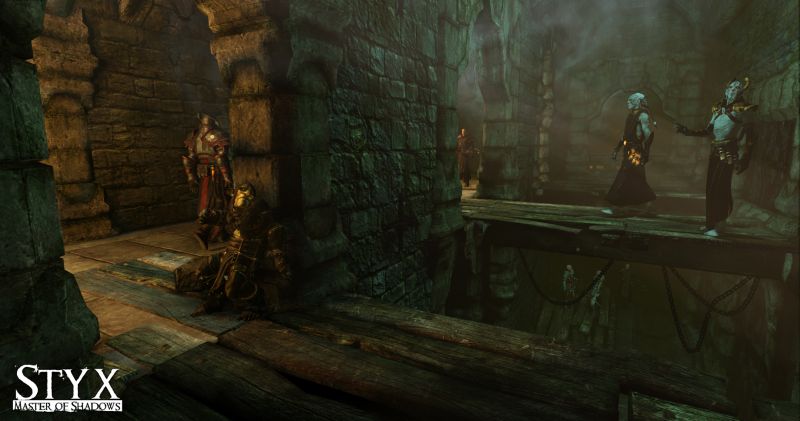 "You will spend most of your time killing the lights, and slitting throats"

You will die, though, and often. If you are spotted, you can almost bet on your demise. Coming into range of an assailant will lock you mono e mono, your only saving grace being a well-timed parry. In these situations, Styx can only target one enemy while the rest are free to prod you with blades and release their bolts. If you escape, well, you’ll likely get shot in the back. Escapism is so commonly ineffective that you might wonder why you don’t immediately restart after being spotted.

For all its frustration, the game can be fun. Some of the upgraded abilities trigger satisfying results, and throwing your lifeless victims over the edge is worth a giggle. These strides don’t last very long, and quickly become marred by repetitive level design, and airhead AI. The game is not short, but the overall quality won’t compel anyone to the credits, or feel like their money was well spent. All told, Styx: Master of Shadows is a pickpocket.

Editors note: Due to technical difficulties on the site this review has been published under Philip Hartmeyer’s byline. In actuality, Eli Kineg wrote this review and deserves whatever credit is due. You can follow Eli on Twitter at @NAPK1NS

Styx: Master of Shadows feels like a dated game. The unsurprising progression and brainless AI make for a game that offers nothing new in exchange for one’s time.

A copy of this game was provided by developer/publisher for review purposes. Click here to know more about our Reviews Policy.
Tagged With: Cyanide, pc, ps4, styx, Styx: Master of Shadows, Xbox One