Styx: Shards of Darkness Review – Flawed Yet Enjoyable To An Extent

The thing that works so well in favour of Styx: Shards of Darkness is also what holds it back from rising to a level where it’s more than just a decent yet ultimately forgettable game. In an age of Metal Gear Solid V: The Phantom Pain and games that have followed in its wake, such as last year’s Hitman and the recently released Sniper Elite 4, Shards of Darkness is a game that is strictly, almost stubbornly, very much an old-fashioned stealth game. And while that very aspect lends the game a lot of charm and some great, enjoyable moments, there’s no denying that a lot of things in Shards of Darkness just feel out of place and outdated in the current scenario of the stealth genre.

That’s not to say that it’s a game mired in old-school simplicity and lacks any sort of meat to its bones. The level design, first and foremost, is absolutely excellent here, and is probably the best thing about the entire game. Levels are big, open and sprawling environments with multiple layers and a number of environmental booby traps and hiding places for you to make use of while you play. There’s a number of ways to go about your objectives, not to the extent that it becomes a completely open ended game where you decide how to get from point A to point B entirely, but still enough that it promotes replays and player freedom. We do have one pretty significant issue with the level design though, as in its last few hours, Shards of Darkness starts reusing its levels. While it’s mostly fun to make your way through new areas in old levels, or to do so with new abilities and what have you, it’s ultimately disappointing to see same areas being reused again instead of seeing new, open, well-designed areas.

"You also have a number of other moves at your disposal, such as creating a clone of yourself to distract guards, or poisoning your enemies and hiding their bodies in chests and trunks."

And sneaking your way through these levels is, for the most part, really enjoyable. The green goblin and titular character Styx has a lot of moves up his sleeves, like squeezing into cracks in walls to hide from enemies, and grabbing them from behind cover to slit their throats. Make too much noise, and your enemies will hear you, and get too close to a certain type of enemy unit and they will be able to smell your foul and easily recognizable goblin stench.

You also have a number of other moves at your disposal, such as creating a clone of yourself to distract guards, or poisoning your enemies and hiding their bodies in chests and trunks. A number of elementary mechanics all come together for a pretty meaty stealth experience on the whole. Add to this the fact that the game also features a crafting mechanic for you to make potions and items, while also giving you the ability to make incremental yet ultimately quite useful upgrades to your abilities, and you have a pretty solid foundation for a stealth game. What’s disappointing, though, is that the AI is not always up to scratch.

Enemies often behave weirdly. Often you might notice some of them walking into walls, or crashing into each other or other objects that are lying around, or failing to react to booby traps that you may have set in the environment. These glitches often take you out of the experience and make the sneaking aspects of the game much less satisfying than they ought to be. And while a lot of these gripes are related to technical glitches, the AI itself at its core isn’t the brightest. Enemies have traditional vision cones, surprisingly enough, and what’s even worse is that these cones are often too small, meaning that while visually on the screen you may only be a short distance away from your enemies and in plain sight, they might not be able to notice you because you do not fall within their cones. 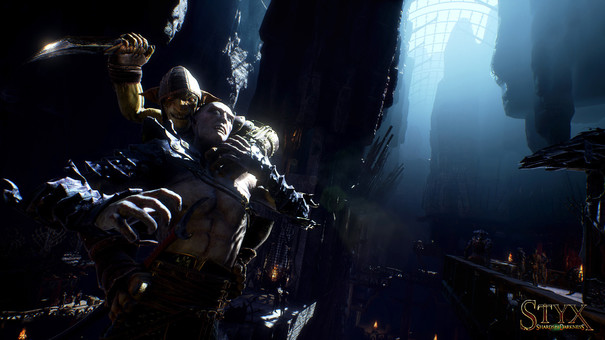 "Visually, the game is well, well below the expected level, so much so that oftentimes it almost gives literal weight to the argument that it’s an old-school stealth title."

Another major issue in the game is with the sections that involve platforming or traversal, since the mechanics in play during these sections are wonky and unwieldy. Styx doesn’t always jump the way you would expect him to, oftentimes falling to his death, while at other times he is simply unable to grab onto ledges or platforms that he should have been able to do. Thankfully, the majority of the game is built around the stealth sections, which are mostly solid and enjoyable, but the platforming sections still manage to be a significant gripe.

The one area where the game is surprisingly better than many would have thought it would be is its writing and its story. Don’t get us wrong, this is no storytelling masterpiece. The narrative in here is serviceable at best, and you will likely forget about it sometime from now, but it keeps things moving along at a nice place and manages to be interesting enough for you to actually care about what happens next.

A large part of that is thanks to the likeability of the character of Styx himself. He’s a nasty, foul-mouthed creature who should be utterly repelling, logically speaking, but he’s been written so smartly and voiced so well- surprisingly enough, for a game that features voice acting that is mediocre at best and horrible at worst- that you cannot help but root for him. Styx, both the game and the character, can be downright hilarious at times, sometimes with snarky, callous quips, sometimes with surprising fourth wall-breaking moments, and other times with funny pop-culture references. Often, the writing feels like it’s maybe trying too hard to be funny, especially on the game over screens where the jokes often don’t land as well as the developers would have hoped, but there’s a good chance that Shards of Darkness will get a number of chuckles out of you. 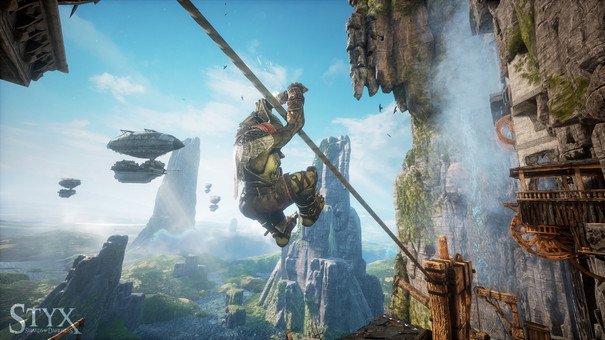 "Styx: Shards of Darkness is a funny, charming and enjoyable game, but one that is as much a victim of its old-school feel as it gains from it."

Visually, the game is well, well below the expected level, so much so that oftentimes it almost gives literal weight to the argument that it’s an old-school stealth title. It runs on the Unreal Engine 4, however still manages to have a number of technical glitches and texture pop ins. We rarely noticed any framerate drops, though, so at least there’s that.

Styx: Shards of Darkness is a funny, charming and enjoyable game, but one that is as much a victim of its old-school feel as it gains from it. While it has some outdated mechanics, technical issues and a few gameplay flaws that keep it from greatness, excellent level design and some smart and funny writing come together to make for a decent yet ultimately forgettable experience.

Final Verdict:
FAIR
Styx: Shards of Darkness is a solid, enjoyable game, but a number of flaws hold it back from being anything more.
A copy of this game was provided by Developer/Publisher/Distributor/PR Agency for review purposes. Click here to know more about our Reviews Policy.