At least for now.

It was quite surprising to see Super Lucky’s Tale on the Microsoft stage at E3 2017, since the game was originally an Oculus Rift VR exclusive. Now that it’s moving on to the Xbox One as a [console] exclusive, Microsoft have stated that the game will take full advantage of Xbox One X’s power, allowing Super Lucky’s Tale to be enhanced with 4K resolution. The bright popping graphics will be especially beautiful on a 4K screen with HDR enhancements, as you control Lucky — an orange fox with a blue cape — around in a 3D platforming adventure.

Super Lucky’s Tale from developers Playful, follows the cutesy adventures of the little orange fox known as Lucky. His adventures will take him far and wide to help him find his inner strength. He’ll be guiding his sister in the search of the Book of Ages stolen from a conniving schemer known as Jinx, a villain who is trying to reshape the world. 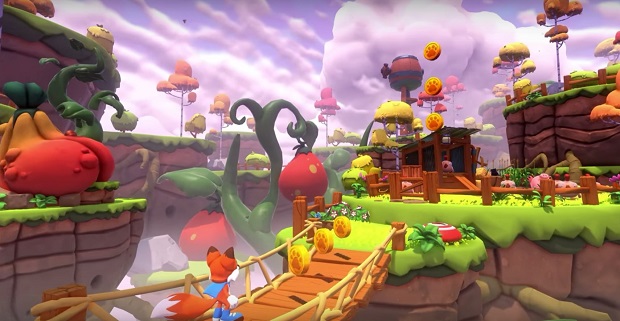 "Speaking of similarities between Mario and Super Lucky’s Tale, Lucky can also go through small manholes that lead to underground zones also. Lucky’s ability to burrow underground to sneak past enemies is a nice touch and so is his climbing ability that lets him scale up to  new platforms higher up. "

Lucky is an adorable, bright-eyed little creature in this stunningly vivid world. He may not be as agile or as charming as, say, Mario, and the level design may not be as deep; but Super Lucky’s Tale definitely takes lessons from the king of platformers.

Lucky controls just like a standard 3D platforming character. With the abilities to run, jump, and burrow underground, you’ll notice immediate similarities between this and many other 3D platformer games — especially Super Mario with the coin collecting, and underground levels. He can also jump on enemies, and whip his tail around to attack — like Tanooki Mario. He collects coins, extra lives, and letters that spell out L-U-C-K-Y. There’s no doubt where the game got most of its influence; it may not be a breathtaking homage to Mario, but it still has a lovable quality nonetheless.

The preview level available to play at E3 2017 was a wonderful grassy plain, floating above the air. The textures were of high quality especially in the thick foliage and stone carved architecture throughout. Dirt, wood, and stone paths lead Lucky from one floating island to another; where each new area has a few collectibles and challenges along the way. Challenges aren’t difficult, like carrying a robot to a platform to activate the next area, or stomping on enemies to release a bridge. The action is overall slow-paced, but is endearing no matter what. Along the way I met up with some other fluffy looking characters who gave me side missions as well. Speaking of similarities between Mario and Super Lucky’s Tale, Lucky can also go through small manholes that lead to underground zones also. Lucky’s ability to burrow underground to sneak past enemies is a nice touch and so is his climbing ability that lets him scale up to  new platforms higher up. The colors and contrasts of each level are beautiful, well designed, and are interesting for what they are. 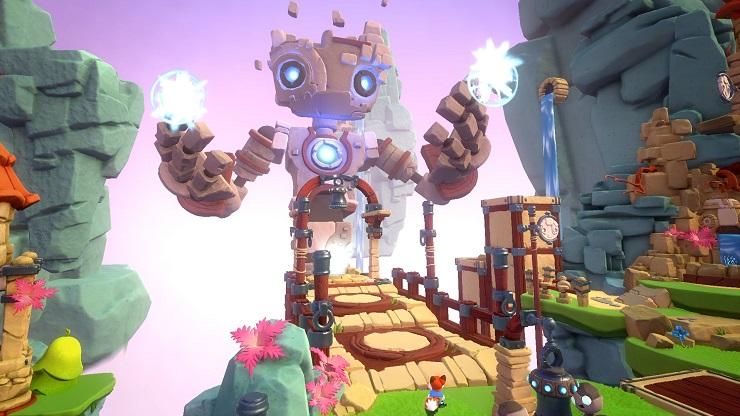 "Super Lucky’s Tale is a cute little reminder that 3D platformers still have a market and can be intriguing."

As I mentioned before, Lucky will find underground zones within the level. These underground areas are more like challenge zones than a standard platformer. Challenges consist of collecting items, moving objects, dodging fire, fighting enemies, figuring out puzzles, and more. Each challenge finished with a score and stats at the end, and then Lucky returns to the surface again. The challenges were fun, not overly complicated, and sometimes very unique. There were only a few I was able to test out, and they were all pretty much the same thing, but in different variations.

Enemies in the game are just as cute as the character himself. Fat bees hover above the platforms ready to sting and big purple flowers planted in the ground are ready to be smacked. These funny little creatures fit perfectly into this world and are just fun to defeat.

Super Lucky’s Tale music consists of little chimes, bell, and miniature notes of lyrics, that seem to be an homage to classic video game platformers — but with a twist of new and refreshing sounds mixed in. You’ll be hearing whistles along with the beats of some fun tunes as you make your way through each level.

Overall, Super Lucky’s Tale is a cute little reminder that 3D platformers still have a market and can be intriguing. It may not be at the level of a Mario game, but it definitely have a sense of cuteness and charm.