Posted By George Reith | On 16th, Jun. 2010 Under Reviews | Follow This Author @GNReith

The original Super Mario Galaxy epitomised everything I love and hate about the Nintendo Wii. It was an original and enjoyable game full of bright ideas that had seemingly no hype and advertising whatsoever, most likely because it wasn’t some terrible party game or tacky 2-bit shovel-ware. Two and a half years on we have been given a sequel and Nintendo have learnt from their previous transgressions, gracing Galaxy 2 with a kind helping of adverts. But does it live up to the new found fanfare it has always deserved?

Super Mario Galaxy 2 began life as an expansion pack for the original game. Miyamoto and the gang set aside a year to create Mario Galaxy 1.5 as he believed the engine still held untapped potential. This development cycle was soon greatly extended when the team realised there was more than enough new content being made to justify turning the project into a full fledged sequel. Whilst Galaxy 2 is clearly a worthy successor to the original, it is unfortunately very obvious that it wasn’t planned as such from the beginning. The game is a sequel in the most traditional of senses and I can assure you that you will have a blast playing through. Unfortunately, being so heavily based on the original, it lacks the impact of the first game and as such I can’t quite award it the perfect score it so nearly deserves.

The game starts off in an all too familiar way with Mario receiving a letter from Peach. She’s baked a cake again and wishes for Mario to come and sample its delights. (If you haven’t understood the significance of this then go stand in the corner and think about what you’ve done.) No surprises she gets kidnapped by Bowser and Mario must chase after them through the galaxy to get the princess back. The plot sets the scene for the game as a whole. It’s classic Mario as we know and love it, but it won’t make quite the impression on you it might have done all those years ago. 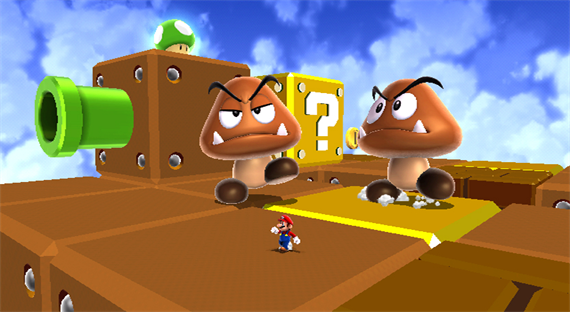 Classic Mario gameplay, but often with a twist

Supposedly, at the beginning of the development cycle, a tool set was developed for the Mario Galaxy engine to enable all the members of the team to have a go at creating levels for the game. You get the feeling a large group were involved in designing the levels rather than a small cell of programmers, as the sheer diversity in the levels is simply astounding. I’ve seen more ideas thrown around in Galaxy 2 than I have in a whole five year console cycle (I find my eyes slowly drifting toward my dusty PS3 as I write this). In a single world you’ll change perspectives from top down to 3D to 2D and back again. You’ll ride on Yoshi and transform him into a blimp. You’ll change Mario’s suit and powers a good twelve or so times. The moment you start to think you’ve seen it all Mario Galaxy 2 just slaps you in the face with a brand new power up, level mechanic or boss battle. I really cannot commend the level design enough. Few games have captivated me with their worlds in the same way that Galaxy 2 has and it never strays into the generic tedium of an ice world, then a fire world, then a leaf world etc.

The courses share the more streamlined style shown in Mario Galaxy 1, but each level is relatively short, housing only four stars at max. I was initially concerned that the game would therefore be shorter but, despite having half the stars per level, there are almost twice as many levels as the previous game to compensate. I was pleasantly surprised by the depth shown in each of the levels too, with enough secrets to keep you exploring the vast regions of space. The comet coins and various mini games are always fun to track down and the secret stars are a blast. It’s just a shame that the prankster comet levels feel a bit like filler in comparison to the rest of the game.

Despite this minor set back the game is incredibly well paced considering the amount of things that can be going on at any one time. The difficulty of the game is an obvious one and it becomes apparent that, despite being far more challenging than its predecessor, the difficulty never ramps up too quickly and always feels just right. A balance is also well struck between fresh ideas and a nostalgic nod to previous Mario games, both in the nature of the levels and power ups, and also in the creatures that you befriend and the enemies you face. This boils right down to the central hub; A map screen with more in common with Super Mario Bros. 3 than any of the more recent games.

As nice as the worlds of Galaxy 2 are designed it wouldn’t be as impressive if they didn’t look quite there. It’s good to see then that the graphics do the game justice. I usually find it hard to judge graphics on Wii titles due to the inevitable comparison to the more powerful consoles. That said, Mario Galaxy 2 looks almost as good as any other blockbuster games of this generation, and it certainly puts all of the Wii’s catalogue to shame. Whilst the artistic direction is nothing new for the Mario universe, it’s pleasant to see reflections in water and crystals and other such effects that demonstrate the technical prowess of the visuals on display. 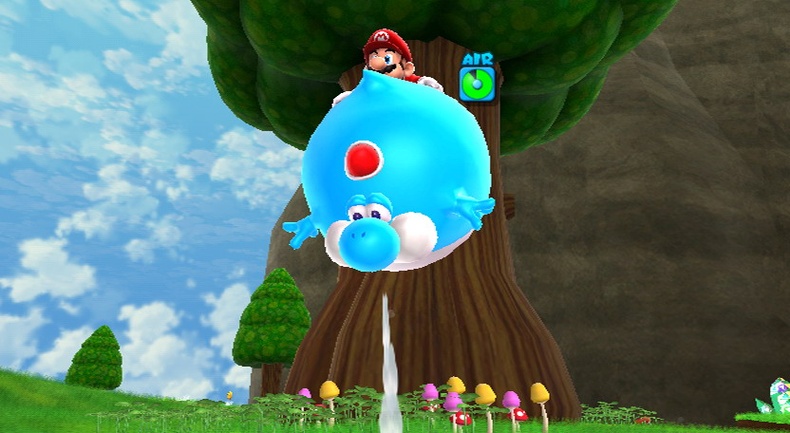 Yoshi’s back and in ways you might not expect

In a recent interview regarding Galaxy 2 Miyamoto boldly professed that the game consists of”95-99% new ideas.” Whilst I might believe this figure in relation to the level design, if you apply this to the game engine it becomes wholly fictitious. It is a functional and versatile engine with a lot to offer, but it has had seemingly no changes or improvements from the engine seen in Galaxy 1. This wouldn’t annoy me as much were it not for some flaws in the engine that could have been rectified for this new instalment. For starters the star bits are totally useless as an attack. If you point the wiimote and hit B you can shoot star bits you’ve previously collected at your enemies, but it’s really hard to hit them while you’re moving and they never do all that much anyway. They were a waste of time in the first game and they’re just as bad now. Likewise the co-star mode has had no alterations made either. A pal with a second remote can help out by shooting these useless star bits as well. Great… They can now freeze enemies to help the first player but this mode is still really dull for player two and it seems a missed opportunity that the whole affair hasn’t been made fun. These don’t detract from the game and are easily ignored, but you’d think that in the two and a half years since the original, one of the testers may have picked up on how badly these two aspects of the game are.

For all my moaning about missed opportunities I ought to remember that “If it ain’t broke, don’t fix it.” Despite a few blemishes, the game engine is just as good as it always has been. It’s classic 3D Mario (with a number of 2D bits for good measure.) It just works and it pulls it all off with almost no effort whatsoever. The fact that all the crazy items and power ups come together so neatly with no balancing issues is a testament to the fluid and versatile nature of the games core mechanics. What’s most surprising is that the engine doesn’t run out of steam even when it strays from the beaten path. I normally get out while the going is good at the first mention of motion controlled sections, but there are a few sections controlled by the remote alone that work really well and are a breath of fresh air. It makes me wonder why 3rd party developers just can’t use the hardware the way Nintendo can. 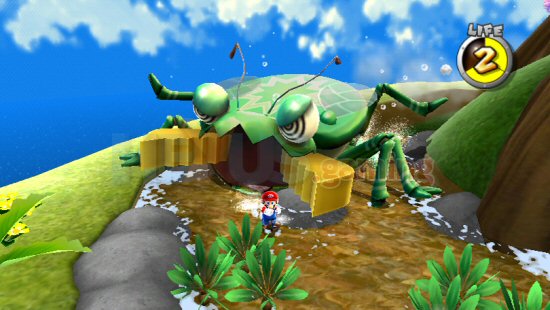 As smooth and effortless as the core game mechanics seem, the only thing that seemed even easier was the use of audio in the game. What can you say about it? It’s the Mario sound set. The mushrooms make that little noise they always do, Mario has his little voice clips. Nothing has changed, but I’m actually really glad it hasn’t. It’s also nice that the voice acting is only partial, as even though I really liked the game as a whole, the voice acting in Mario Sunshine was really lame. One part of the sound that really brought out a new dimension of the game was the soundtrack. It’s just really well written. It’s got a lot of catchy melodies on display counterbalanced with some more textural compositions and it always cuts a really fine line between giving us new pieces and our old favourites in a newly arranged format. I might not necessarily rush to buy the CD, but I was thoroughly impressed regardless.

For a game with no multiplayer component Mario Galaxy 2 also has a surprisingly large amount of staying power. My play-through lasted roughly fourteen hours, but I didn’t exactly stop to smell the proverbial roses. Needless to say there are a lot of levels to go through. And a lot of secret levels to go through. And an entire special world of levels to go through that open up when you complete the game. Even though you can finish it in a few days of solid play, to 100% Galaxy 2 is going to take you a long time indeed. It always sucks having to pay for a full priced game, but rest assured that with Galaxy 2 you’ll be getting your money’s worth.

Super Mario Galaxy 2 is quite easily the most enjoyable single player game on the Wii at the moment. It is a barrel of fun and I’d highly recommend it to anyone regardless of age, gender or gaming ability. Hell, I’d almost advocate you buy a Wii just to play it if you don’t have one. So why can’t I give it that elusive perfect score? Mario Galaxy 2 is like Disney land Paris. It’s practically made out of magic and pixie dust and there’s just so much cool stuff wherever you turn. But for all the awesomeness going on you always know that the Florida resort was there first, and that it was the park that set the initial standard. The first game was flawed ambition, and this sequel stands as a perfected version. It won’t make the same mark on the industry that previous games in the franchise have but you should buy it right now. There is no excuse.

The engine hasn't changed at all from the original, The co-op mode is still as fun as watching paint dry

Marking the first straight sequel in the 3D Mario franchise, Mario Galaxy 2 arrives to topple its older brother. Is the old Italian plumber beginning to show signs of age, or has he returned with a new found vigor?

A copy of this game was provided by developer/publisher for review purposes. Click here to know more about our Reviews Policy.
Tagged With: Super Mario Galaxy 2, Wii