Everything you need to know about Super Mario Party. 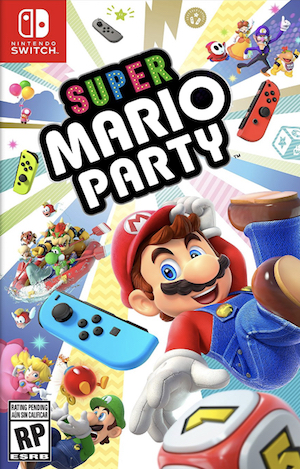 Once again, friendships will be broken, controllers will be smashed, and curses will be yelled, as Nintendo returns with the popular party franchise. Super Mario Party, the eleventh main instalment in the Mario Party franchise, and its is looking to incorporate elements from both, newer and older games in the series. It will also be looking to take advantage of the Switch’s unique capabilities in various ways.

Super Mario Party was announced for the Nintendo Switch during the E3 2018 Nintendo Direct presentation. One again, it will be developed by series developers Nd Cube. Nintendo have described the game as a “complete relaunch” and “complete refresh” of the franchise, as they look to bring back popular elements from earlier games in the series, while also retaining elements from some of the more recent games in the series. During the game’s announcement, Nintendo also promised deeper strategy elements in the game. 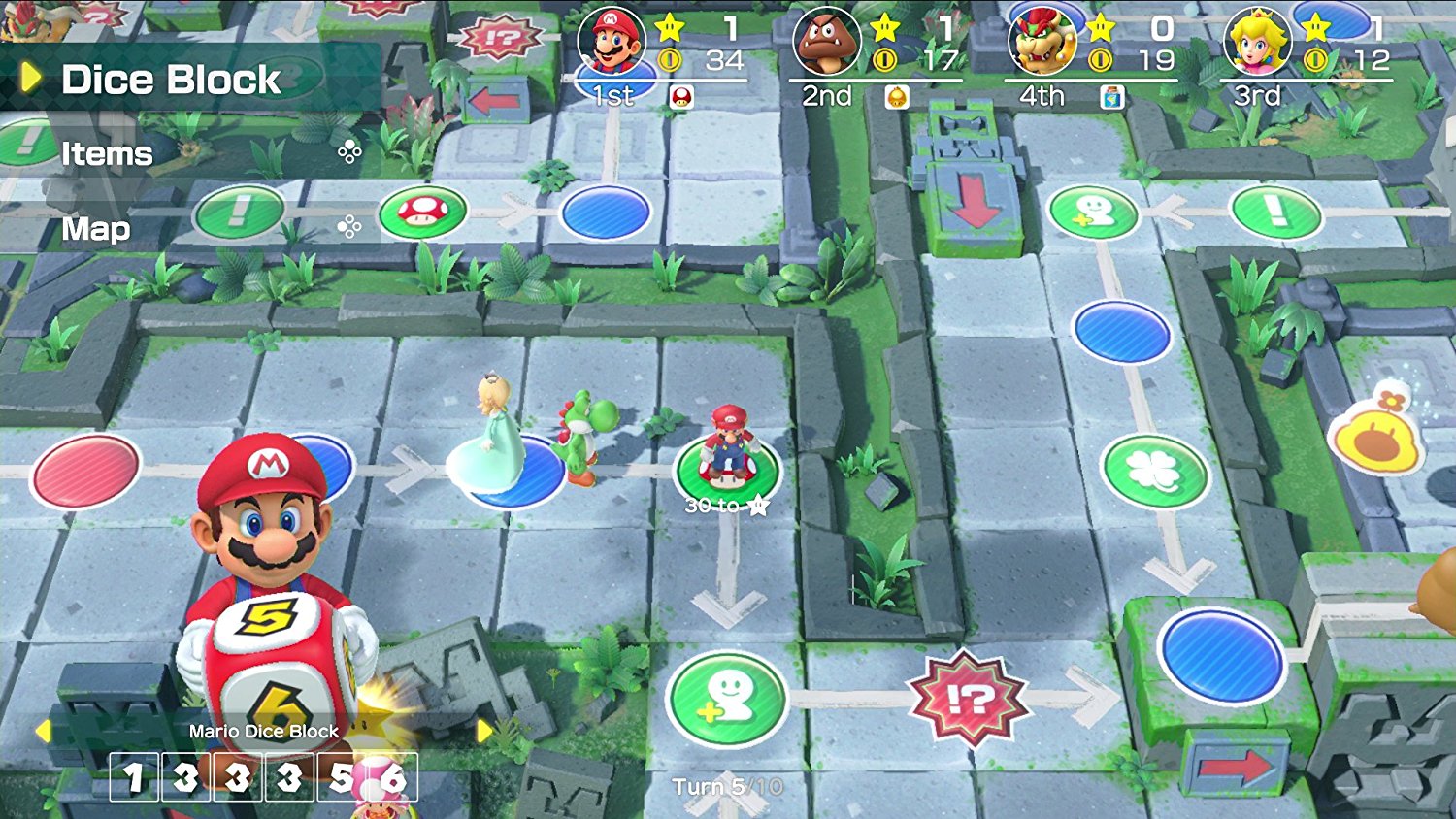 Super Mario Party is mainly going to have two main modes. There’s Party Mode, which is your regular Mario Party experience, and sees up to four players in a single game, who take turns moving around a board in search of stars and competing in a variety of mini games. Mini games are, of course, the core of any Mario Party experience, and in Super Mario Party, there’s going to be plenty of good stuff going around. There will be 80 new minigames this time, spanning across free for all, 2v2, and 3v1. Croozin’ for a Broozin’ and Fish Food, for instance, are free for all games, which involve, respectively, players being chased by swarms of Broozers, and player throwing balls into a Cheep Chomp goal.

Tug of War is a 2v2 minigame (also a pretty self-explanatory name), as is Fruit Forecast, in which players catch falling fruits. There are also several other 2v2 minigames that have been confirmed, but have not yet been named. These include a minigame which is essentially a pie-throwing contest between two teams (at each other, just in case you were wondering), another minigame based on baseball, and yet another that involves players using canons to bring down opposing the team’s castles, which are built of puzzle block pieces. Then there’s the one versus three mini games- one of them is Off the Chain, a 3v1 game which involves one player riding a Chain Chomp and trying to hit the other three players. Another one is Sign, Steal, Deliver, which sees players loading packages, which are given to them by Toad, onto a truck. Yet another, called Dust Buddies, sees players vacuuming a dusty room- Luigi’s Mansion nod?

The second mode is the Partner Party, which which sees two teams of two players playing on a board with free movements, searching for stars, similar to Mario Party: Star Rush on the 3DS. One of the changes that Nintendo made with Mario Party 9 was the addition of cars, which replaced free movement across the board. Needless to say, it wasn’t very well received, but the developers at Nd Cube have definitely been listening to fans. Regular free movement for players is back in the picture. Meanwhile, Nintendo are also promising to include a layer of strategy to the game, which will come through items that will alter player movements and speed.

Strategy will also come through Dice Blocks. Each character will have different dice blocks specific to themselves, and dice blocks can have a variety of effects, from how many rolls they can have in total, to giving players extra coins, to even taking away players’ coins. However, Nintendo are going to try and balance things out to give each character a proper balance of advantages and disadvantages. For instance, while Bowser has two -3 coins on his specific dice block, he also has higher values of 8, 9, and 10. Similarly, while has two 10s and a +5 coins, he also has to contend with three 0s. Then there are also the “safe” characters whose dice blocks have very low risk, but also very low rewards, such as Daisy, who has four 3s and two 4s. 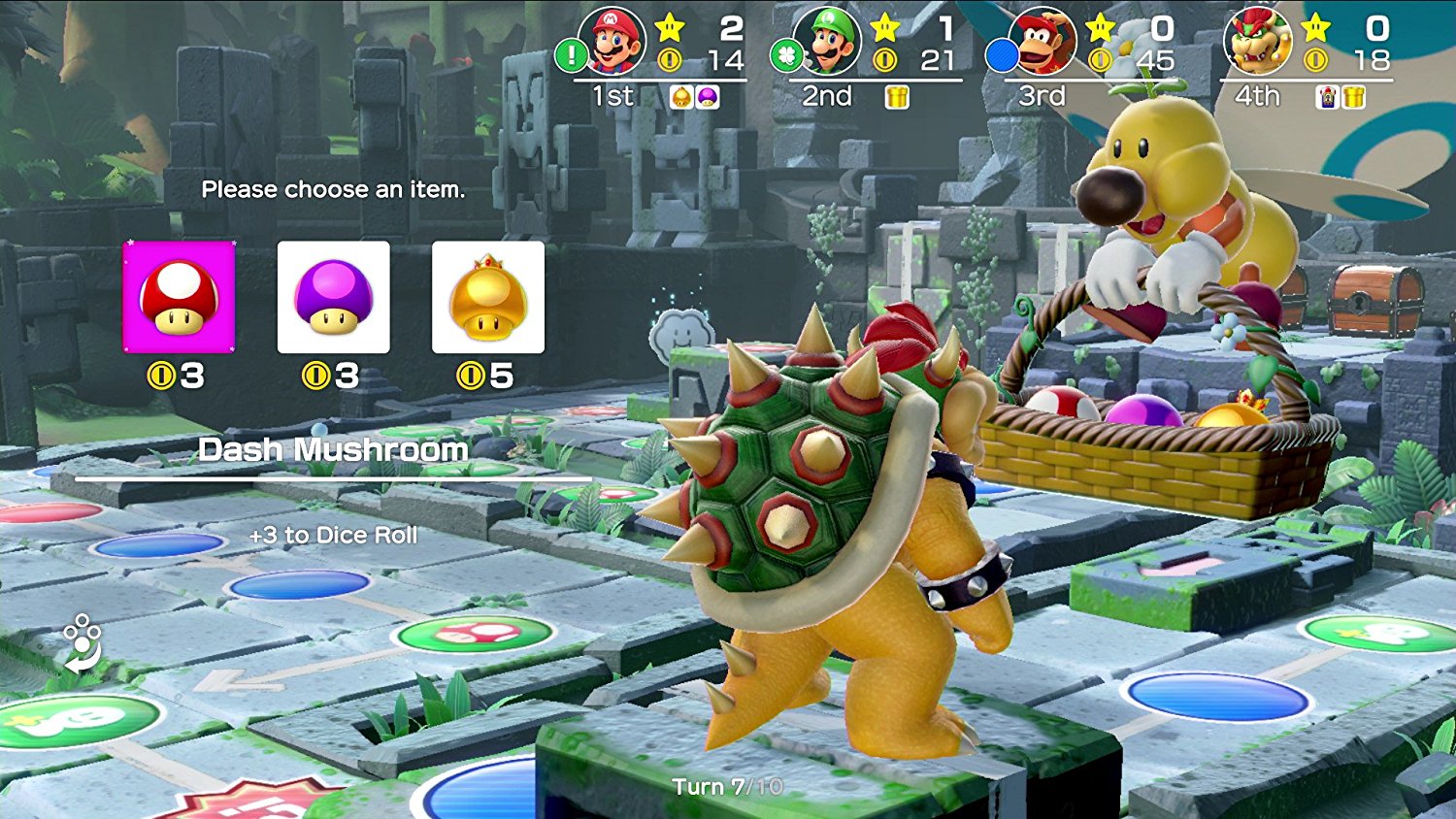 Board items will, of course, also be back, while special items are going to be included as well, which can have a wide variety of effects. For instance, there’s Coinado, which summons a special attack on a rival of your choice, allowing you to steal between 5 to 10 of their coins, while Golden Drink nets you one coin every time you move (though not when Peepa is in the way). Some other items are Golden Dash Mushroom, which rewards a +5 dice roll; Fly Guy Ticket, which lets you steal an item from a rival player; and Warp Box, which allows you to warp close to one of your teammates.

Super Mario Party will allow players to play with just one Joycon each, which will make local co-op much easier and much better than what it was on the 3DS. While many minigames will be played with traditional button controls, some will also be based on motion controls, such as one that sees players controlling a tricycle. A major new feature is called Toad’s Rec Room, which allows you to physically place two Switches together to align and synchronise their screens to display a larger area, and thus be able to play in larger, dual-screen environments- obviously, this is only available in the Switch’s tabletop mode. Also, this will only be limited to certain minigames, but further details on this are as of yet unknown.

Online multiplayer is also being included in Super Mario Party. You can play with both, friends and strangers, but the Party Mode’s board games are not going to be part of this online mode. Instead, players will compete against other players in a collection of five randomly selected minigames from the game’s total of 80 minigames. The online component will also include leaderboards and a ranking system, while Nintendo have also promised that this mode will net players some special rewards, though what these rewards might be isn’t something they have detailed yet. 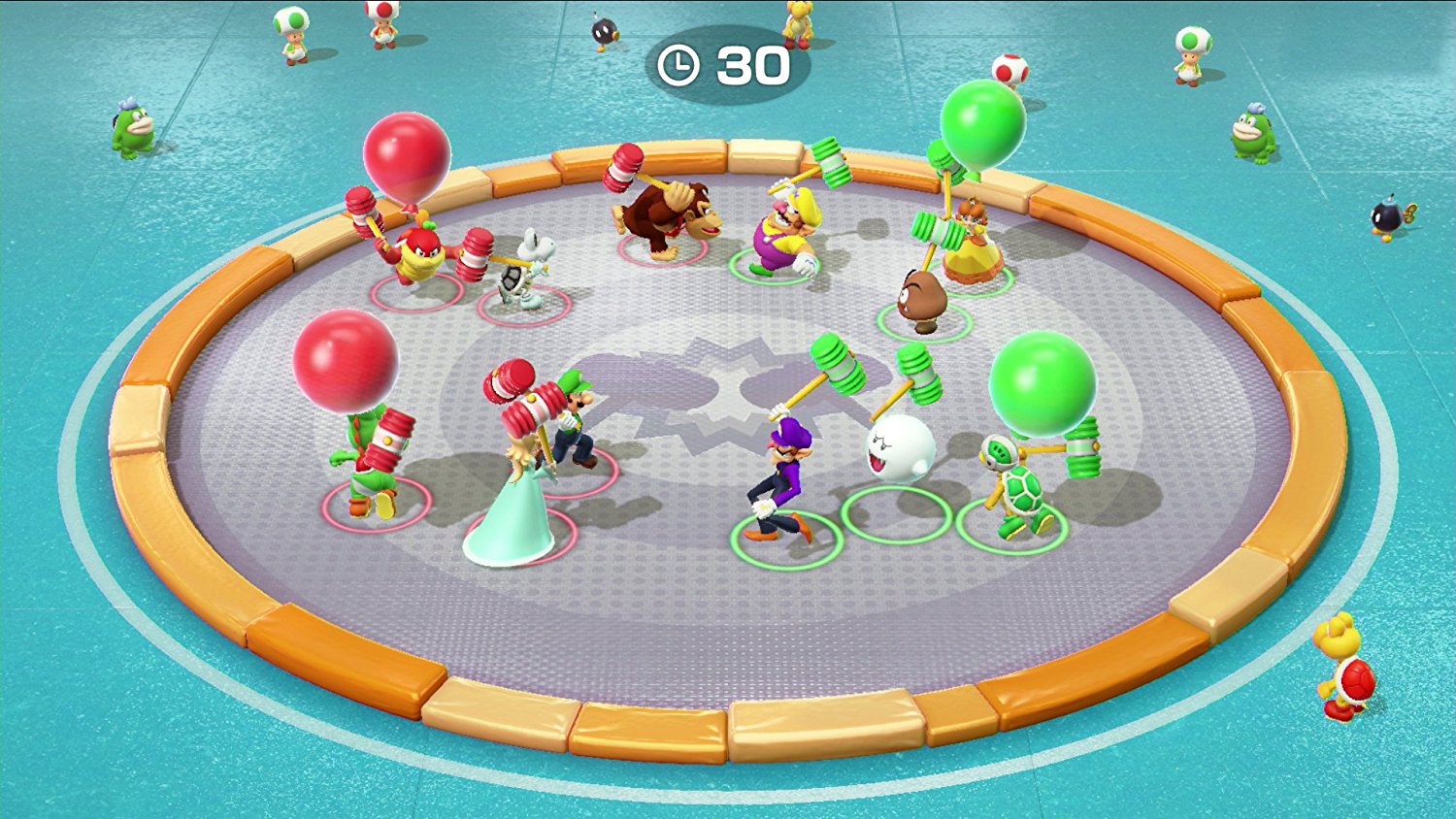 As for the characters included in the game, Super Mario Party is promising to have one of the most full-featured character rosters ever in the series. Of course, there’s going to be characters like Mario, Luigi, Donkey Kong, Peach, and Bowser, while Toad will obviously be returning as the host once again. But these are all characters we expect to see anyway. Diddy Kong and Bowser Jr., who have appeared in Mario Party games before, but only in its handheld instalments, will be making their console Mario Party debut, while three brand new characters, namely Pom Pom, Monty Mole, and Goomba are going to be featured as well.