Chief Technology Officer Ivan-Assen Ivanov answers questions regarding how the game performs on the PS4 Pro and Xbox One X.

Surviving Mars was recently released. Developed by Haemimont Games and published by Paradox Interactive. The game tasks players with colonizing Mars while facing the many challenges involved in trying to do so. The game looks gorgeous and it’s evident that the team have put a lot of effort into ensuring that the game performs well across different platforms.

To learn about how the game’s performance differs between the PS4 and Xbox One, and the PS4 Pro and Xbox One X, Gamingbolt spoke to Chief Technology Officer Ivan-Assen Ivanov who provided some valuable insights regarding the technical aspects of the game’s development. 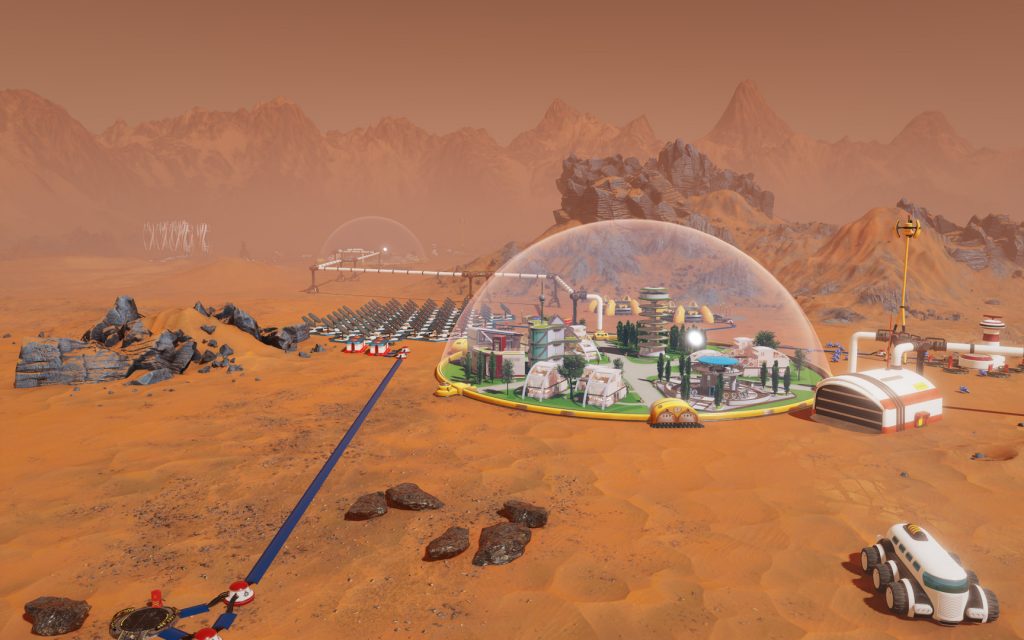 "For Surviving Mars, we implemented several fairly significant changes. To achieve higher-quality industrial look, we moved to a system of physically based materials (PBR)."

To begin with, can you please tell us about the engine that Surviving Mars is running on? The game looks absolutely spectacular.

Surviving Mars is running on the latest version of our in-house engine. We have used it to ship ten titles on six platforms in different genres, and is being constantly updated for the ever changing requirements of the games we make.

For Surviving Mars, we implemented several fairly significant changes. To achieve higher-quality industrial look, we moved to a system of physically based materials (PBR). In order to have entire huge colonies glow like Christmas lights during the night, we switched our direct lighting to use clustered deferred shading. To reproduce the famous bluish Martian sunsets, we implemented an atmospheric scattering approximation for skies and fog, and attempted to match the numbers against what is known about the Martian atmosphere. Last but not least, we had to implement numerous optimizations to handle the vastly increased map size – each Surviving Mars map is about the same surface area as Skyrim!

The game is confirmed to be Xbox One X and PS4 Pro enhanced. Can you tell us what resolution and frame rate will they run on?

Surviving Mars is a game with slower pacing camera and large vistas full of tiny buildings, drones and colonists. For this reason, we decided to prioritize resolution over framerate, and all console versions target 30 fps. The base consoles run at native 1080p, Xbox One X and PS4 Pro – at native 4K.

How much time did it took to get the game up and running on the Xbox One X?

I’m not sure how much I’m allowed to go into details because of the NDAs we have with the console vendors, but the development tools this generation are excellent, and the Xbox One X has an even more straightforward architecture than its predecessor. So I guess the answer would be something like “very, very little”. 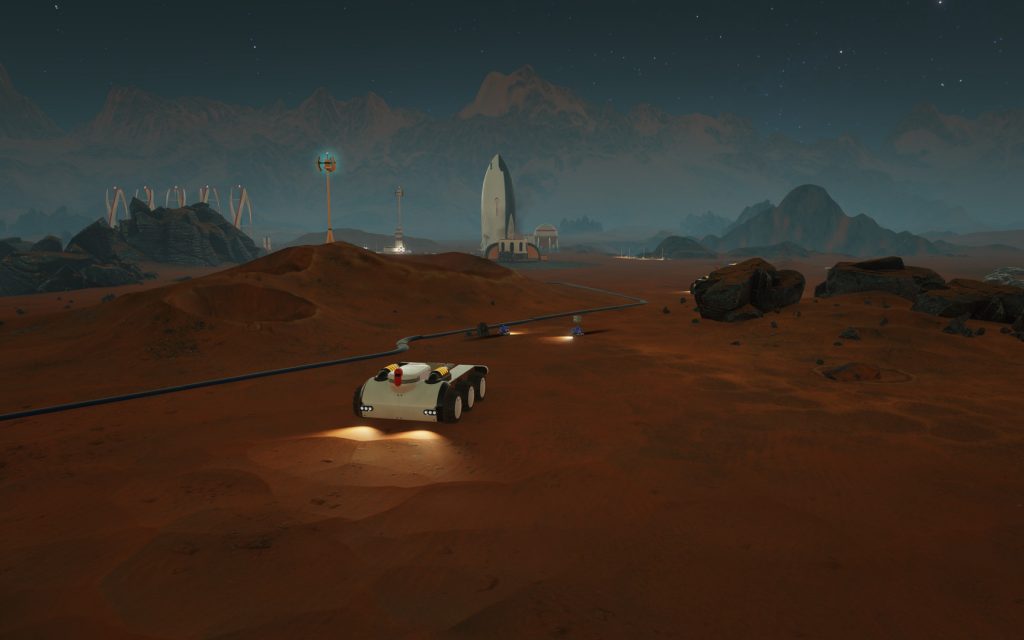 "Surviving Mars is a very CPU-heavy game due to the complex simulation and sheer number of things on the screen in late game colonies, so for our particular case, the difference is smaller than for the typical GPU-limited game."

It’s hard to put numbers on something like this. On one hand, the “overall effort” on a smaller game vs. a AAA production with team sizes in the hundreds is not comparable. On the other hand, most of this effort can be reused across multiple games using the same engine; the significant help you get from Sony’s samples and libraries should also be taken into account. The installed base of the PS4 Pro and 4K TVs will only grow from now on, so effort spent on it is probably well spent.

In your opinion, how much does the PS4 Pro differ from the Xbox One X?

One is more powerful than the other, especially when it comes to GPU 😉 Again, I’m not at liberty to quote hardware specs, and they are widely available elsewhere. Surviving Mars is a very CPU-heavy game due to the complex simulation and sheer number of things on the screen in late game colonies, so for our particular case, the difference is smaller than for the typical GPU-limited game.

Microsoft had made it compulsory for developers to support the Xbox One and Xbox One X i.e cross compatibility. In case of Surviving Mars, do you think this will hold back the Xbox One X version in any way?

I don’t think the Xbox One will hold back Xbox One X versions noticeably in many cases – certainly not with Surviving Mars.

The greatest differences between the two Xboxes are GPU power, which is eaten by the increased output resolution for 4K; and RAM, which, on most games, will probably be used mostly for textures. And textures are the easiest things in a game to scale down – you simply drop down the highest resolution versions, preferably in a smart, hard-to-notice way. I wouldn’t expect anyone to use the additional RAM on the Xbox One X for significantly improved gameplay, for example – although I’d be happy and curious to be proven wrong on that!

There are many aspects to GPU performance, and the rate of execution of arithmetic operations is only one of them; the Xbox One X has other advantages in other areas that more than make up the differences. That said, special handling for 16-bit values, including increased throughput (how many operations are executed simultaneously) and decreased register usage (registers are a precious resources, and you can fit two 16-bit values in one 32-registers on some architectures) is something coming (back!) to PCs, and I expect it to be gradually more and more used in the coming years. 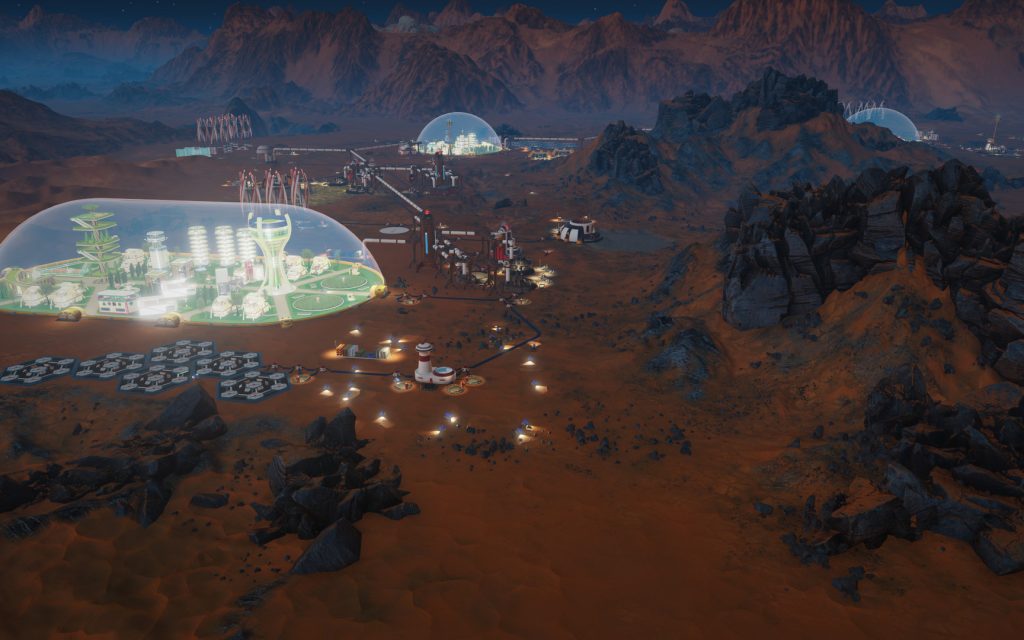 "The hardware requirements of a title are determined not by the highest but by the lowest-end machines you can hope to realistically target to reach the widest possible market."

Xbox One X has a ton of memory on board (12GB in total and 8GB of that is available for games). Do you think PC game developers such as yourself, will now be setting your PC memory requirements even higher in the future due to Xbox One X offering even higher memory allocations?

The hardware requirements of a title are determined not by the highest but by the lowest-end machines you can hope to realistically target to reach the widest possible market. Even by the end of the generation, I expect the baseline consoles (Xbox One and PS4) to have a majority of installed base, and right now 8 GB is the most popular memory size on the Steam hardware survey. I don’t think many PC developers will even think of raising the minimum memory requirements higher than that anymore soon. The current high demand and corresponding high prices of all kinds of RAM won’t help in that regard, either.

While we have nothing concrete to commit to, it’s definitely something we’re looking into, as we think it would be a good fit for the visuals in Surviving Mars. Unfortunately we couldn’t do it in time for release, but we hope to support the game for a long time, so who knows?