There’s something about the idea of the end of the world and subsequent desperate attempts at surviving what comes next that has enamoured creative minds for quite some time. The post-apocalypse has always been a popular genre in entertainment media, and video games aren’t exempt from that either. With Surviving the Aftermath, developer Iceflake Studios has attempted to tackle that setting in a manner that we haven’t seen all too often. City building and management simulators set in the post-apocalypse aren’t all that common, with a few notable exceptions, but building on the foundations laid down by its spiritual predecessor Surviving Mars, Surviving the Aftermath is one that should probably go down as one of the better experiences in this very limited group.

The premise here is simple. The hubris of mankind has brought about the end of the world, and what’s left is dealing with a smorgasbord of apocalyptic cataclysms- nuclear fallouts, fire raining down from the sky, disease, deadly winter storms, bandits and survivors at each other’s throats, you name it. In this mess, it falls to you to establish a small colony of survivors and make sure that you not only survive, but eventually, with the right management, grow, expand, and maybe, just maybe, thrive.

Surviving the Aftermath doles out tiny bits and pieces of lore and backstory for its world, but it is by no means something the game focuses on. There isn’t much of a story here, and once the setup is out of the way, the gameplay experience takes over. You occasionally get quests and are asked to make choices, but all of it bleeds into the mechanical core of the game- and it’s better for it. Surviving the Aftermath knows what it’s good at, and it smartly chooses to devote most of its attention to those strengths. 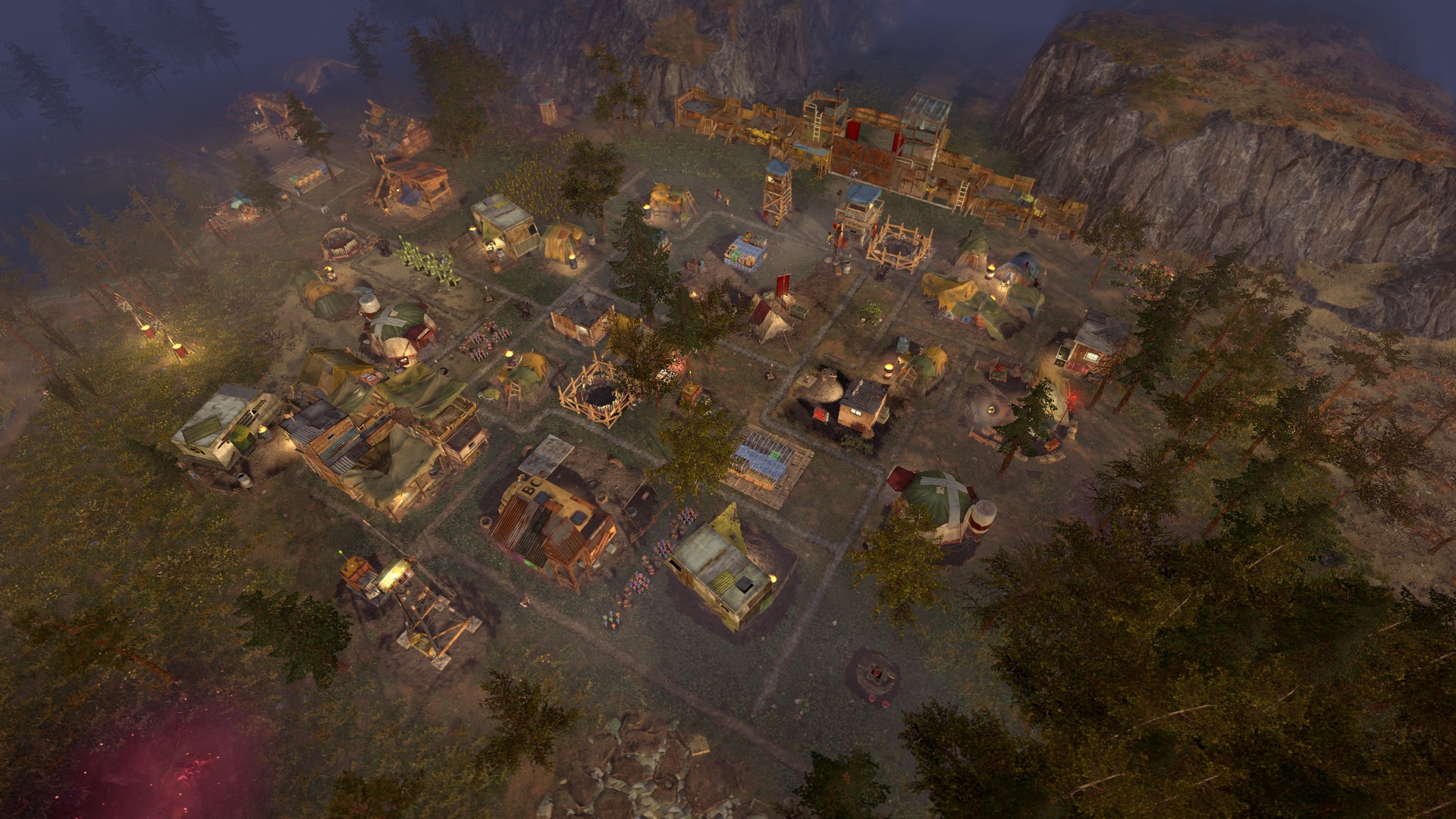 "City building and management simulators set in the post-apocalypse aren’t all that common, with a few notable exceptions, but building on the foundations laid down by its spiritual predecessor Surviving Mars, Surviving the Aftermath is one that should probably go down as one of the better experiences in this very limited group."

Chief among those strengths is the core gameplay loop, which is ridiculously addictive, as it should be in any good building and management simulator. Every game in Surviving the Aftermath starts out slow, setting you up in a procedurally generated map with a handful of survivors and limited options for building and upgrading things. In the first hour or so, you’ll mostly be building rudimentary structures to support your colonists’ basic needs, like housing and food, while also gathering resources to build those structures. Once you’ve built a gate for your colony, that’s when the game really begins, because at that point, not only can you start taking in more survivors to expand your settlement, you can also start sending out your Specialists out into the world map to gather resources and scout out more of the map.

It’s a loop that feeds itself in a very simple but equally effective manner. You’re constantly micromanaging the inner workings of your colony and making sure that people are being put to work on the things that you need in the immediate future, but at the same time, you’re also always working towards more long-term, big-picture goals, like unlocking upgrades in the tech tree across different categories. The two sides of the experience bleed into each other, and gathering more wood or plastic becomes just as important as upgrading your tents or unlocking new buildings and structures.

As you welcome more survivors into your colony and recruit more specialists, the speed at which your settlement grows and progresses exponentially improves as well, allowing you to explore more of the world, which, in turn, allows you to expand your colony even further. It’s a tight, addictive loop that grows more layered and engaging the more you play. Things can be a little cumbersome in the beginning, especially because Surviving the Aftermath doesn’t do a very good job of tutorializing, but once you pick up on the game’s central mechanics, everything quickly begins falling into place. 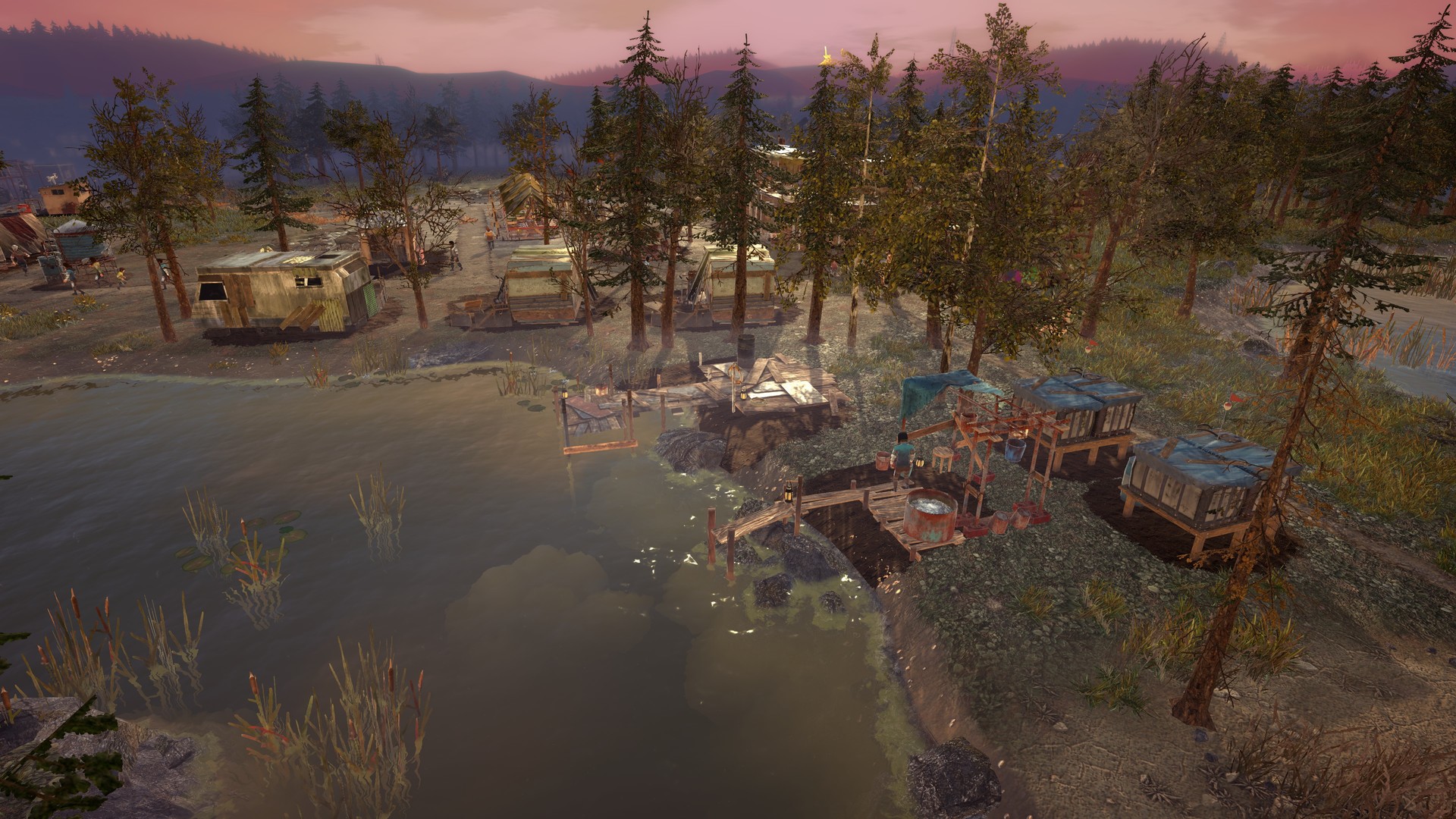 "It’s a tight, addictive loop that grows more layered and engaging the more you play."

This being the apocalypse, you are, of course, also tasked every so often with putting out fires, and here, the game isn’t always consistent in how engaging it is with the activities it comes up with. Some problems, like dealing with sick or injured colonists or dealing with attacks from wildlife, become automated once you have the right structures or people in place, but they’re still engaging, because you need to make sure you do have that stuff in place. Other problems, like cataclysms that occur every now and then – like nuclear fallouts and winter storms – demand more immediate attention, and this is where the game really leverages its post-apocalyptic setting to deliver more intense tasks and challenges.

Then there are moments where you’re asked to make choices, which, sadly, just aren’t as gripping as they should be. Colonists will come to you every so often with situations that will need you to make decisions as their leader. Someone might come to you with a new experimental idea that isn’t guaranteed to succeed, but if it does, could prove to be quite beneficial. Someone else might inform you of someone in the colony who’s been stealing resources with you, leaving you to decide how to deal with the one responsible. How you deal with these situations affects the overall happiness of your colonists, but that isn’t something that I’ve honestly ever fretted over too much. Yes, making the wrong decisions can make your colonists unhappy, but not only are the correct choices usually very easy and obvious, happiness itself is something that you can cheese back up to a decent level in other ways, which means the choices, more often than not, end up feeling hollow.

Though there’s plenty going on in Surviving the Aftermath at almost all times (especially as you progress further and further into a game), the game doesn’t ever feel too intense in the way that something like fellow post-apocalyptic management sim Frostpunk so often can, which is a little disappointing, because the post-apocalypse setting lends itself so well to intense challenge and tough decision-making. Even so, while the game doesn’t fully capitalize on its potential there, the mechanical core of the experience is solid and layered enough to always keep you engaged, at times almost to a dangerously addictive degree. 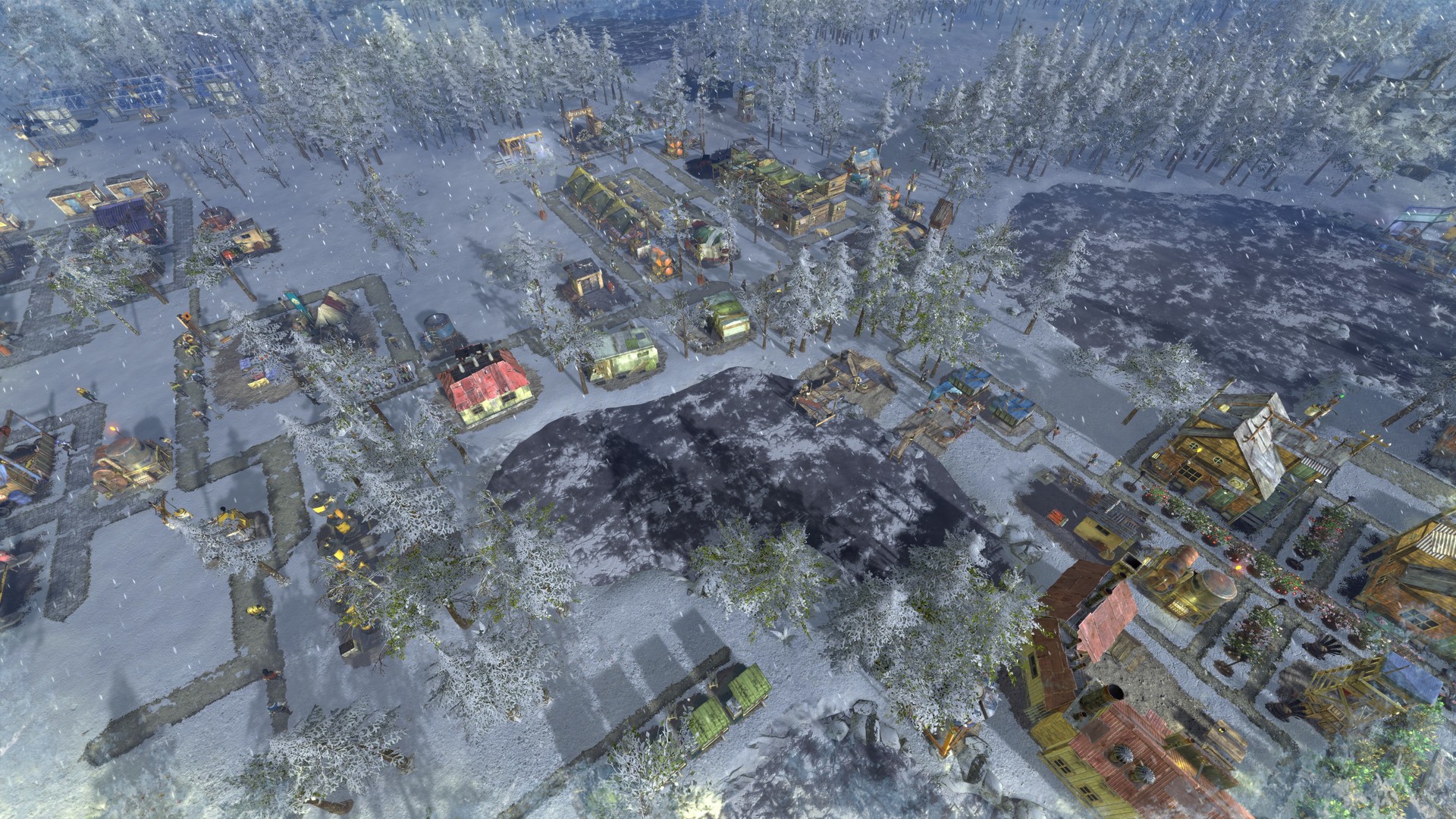 "While the game doesn’t fully capitalize on its potential there, the mechanical core of the experience is solid and layered enough to always keep you engaged, at times almost to a dangerously addictive degree."

Visually, Surviving the Aftermath is a decent game. None of its environments, people, or buildings ever exhibit the kind of detail that the absolute best management simulators are usually capable of exhibiting, which means simply zooming in on things and watching buildings being built or people going about their business isn’t quite as enjoyable as it could be. Even so, the game maintains a respectable level of visual quality even at the worst of time, and best of all, doesn’t often run into any major performance issues.

Surviving the Aftermath is a solid game. It might not be the best game of its kind – it doesn’t ever reach the same heights as something like Frostpunk, for instance – and it could have done more to leverage its post-apocalyptic setting, but at its core, it’s a well-made city builder and management sim with a strong mechanical base that can keep you hooked and thoroughly addicted for long stretches of time. Anyone who enjoys the genre should give this one a look.

The Xbox One version of this game was reviewed on the Xbox Series X via backward compatibility.

Final Verdict:
GOOD
Surviving the Aftermath doesn't utilize its dire post-apocalyptic setting as well as it could have, but those looking for an addictive, mechanically dense city builder/management sim will find a lot of enjoyment here.
A copy of this game was provided by Developer/Publisher/Distributor/PR Agency for review purposes. Click here to know more about our Reviews Policy.