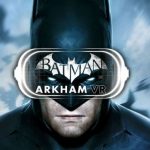 According to Rocksteady that is.

Batman: Arkham VR May Only Only Exclusive To PSVR Until March

So other VR format owners can probably expect the game on their headsets eventually.

Batman: Arkham VR New Video Takes Us Behind The Scenes

Be the Batman, literally.