Use See-Through View to check surroundings without removing the headset, or the new broadcast feature to film yourself while playing.

The deal will contribute more than 10 percent to Tobii's revenue for 2022 (though revenue potential beyond that is uncertain).

Bit Planet Games accidentally tweeted out a real-life picture of the headset and its controllers before quickly removing it. 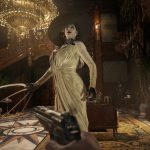 First trailer showcases sequences in Castle Dimitrescu, with players able to wield a separate gun in each hand. A release date is to be announced.

PlayStation VR2 May Launch in Q1 2023 With About 1.5 Million Shipments – Analyst

This includes Horizon: Call of the Mountain, announced earlier this year and developed by Guerrilla Games with Firesprite Games.

A developer at Truant Pixel also talked about how Sony "has been extremely deliberate" with many of its choices for the VR headset.