I’m not going to lie to anyone and tell them I’ve been good at any modern kart racers. I grew up beating all of my friends at Mario Kart 64, but the genre has evolved significantly since then, erasing the days of simplistic item box pickups and winning by just managing not to fall off a course. Sure, they’re all largely luck-based, but even the grandfather of the genre expanded on its mechanics enough to throw me off with the fairly recent Mario Kart 8, and I’ve never felt so old because of it. Though I can’t speak for gamers who have played a plethora of kart racers over the last two decades, Team Sonic Racing is hands down the most content-packed and fundamentally complicated kart racer I’ve personally experienced. Digging into the game came with the concern of whether I’d be able to overcome mediocrity and begin timing my drifts perfectly, pull off epic trick jumps, and learn its team-focused intricacies to become a kart racing champion. 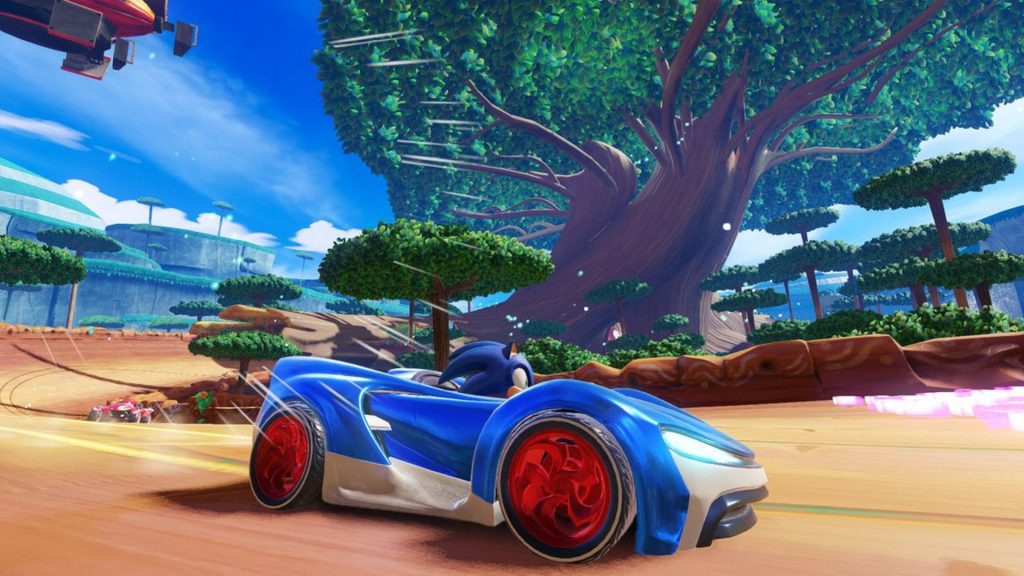 "Unlike your average kart racer, Team Sonic Racing continues to extend its sensory stimulation through a suite of teamwork mechanics."

That didn’t happen. But what did happen is that I had a lot of fun even when I sucked, and the game’s learning curve isn’t so steep that it alienates people like me. The more time I spent with Team Sonic Racing the more it rewarded me, and I was improving and consistently winning in no time. But I wasn’t kidding when I said the game is complicated. While I don’t mean that it’s inaccessible, there is substantially more to keep up with than the kart racers of yore. It was at least a few hours in before I began consistently remembering to do tricks during jumps to grant myself a boost upon landing – a feature that initially seemed like too much to keep up with in the midst of flying projectiles, ever-changing course obstacles, and the already hectic sense of speed.

Unlike your average kart racer, Team Sonic Racing continues to extend its sensory stimulation through a suite of teamwork mechanics. While normal races can be sought out if one should wish, the game highlights its team races in every way. Rather than a player going up against 11 other racers, teams are broken into 4 trios. Working together isn’t just a gimmick either – it’s often paramount to winning races. You can drift off teammates for slingshot moves that send you zooming by, give them a helpful boost by driving past them after they’ve crashed, or trade each other various item pickups in times of need. All of these actions fill up a meter that allows for a full team ultimate ability that grants a generous speed boost and invincibility for barreling through your opposition. It’s a short-lived but endlessly helpful option that helped me recapture first place or make up for lost time due to obstacle damage.

The courses are all spectacular both aesthetically and mechanically. From simple, straightforward courses with easy to understand layouts to courses that require pinpoint drifts around tight turns and perfect memory of its geography, I didn’t find a single course in Team Sonic Racing that I didn’t like. An assortment of obstacles such as rolling blocks, saws, clock hands, and crabs makes each location feel unique and begs for you to learn their movement patterns to improve navigation times on courses. 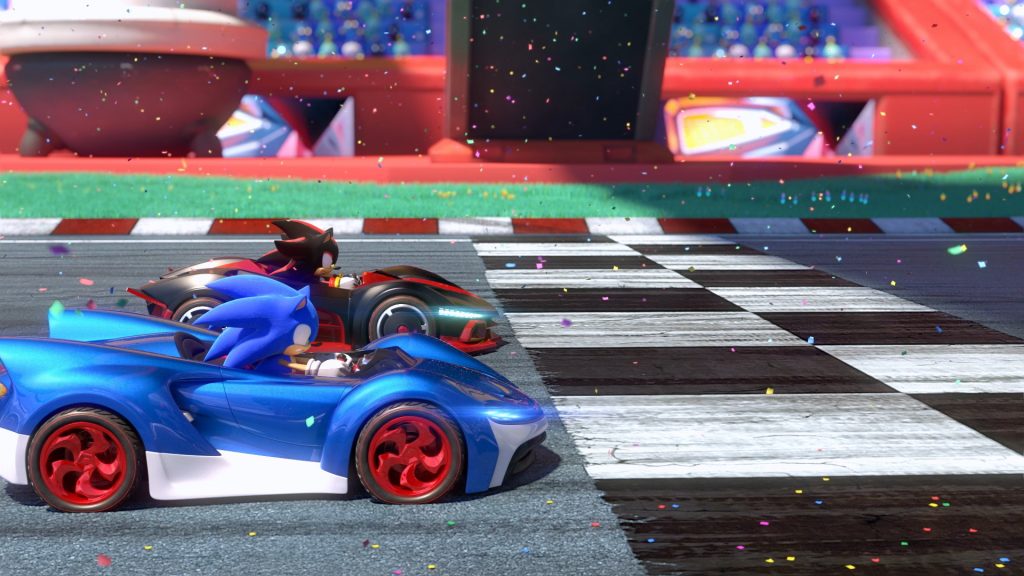 "The addition of Team Adventure mode will offer something of value to Sonic enthusiasts looking for a narrative, but the story itself was mundane window dressing for me."

A familiar collection of jumps, boost pads, and item boxes are complimented by rings to collect that improve your top speed. The speed change is virtually unnoticeable thanks to the game’s already frantic pace, but every millisecond counts since Team Sonic Racing isn’t impervious to the genre’s dreadful rubber band AI feature. One second you can have a substantial lead and the next second be in fourth place simply because the game felt that your success should be punished with an unfair feature. I’d be angrier if I wasn’t used to it by now, but there’s still no excuse for this archaic game balancing shortcut in 2019.

The presentation is rounded out by an absolutely jamming soundtrack full of upbeat tunes ranging from its metal-esque theme music to the multitude of punk, rock, and electronic songs layered throughout its menus and courses. Unlike most games of its ilk, Team Sonic Racing manages to speed past the concept of music as just background noise and instead allows its beats to imbue its frantic gameplay with a further sense of energy and speed. I never expected to be humming a Sonic racing game’s soundtrack around my house, but here we are, and this is life now.

The addition of Team Adventure mode will offer something of value to Sonic enthusiasts looking for a narrative, but the story itself was mundane window dressing for me. Bland dialogue delivered alongside still images of Sonic and friends did nothing for someone like me who hasn’t ever been heavily invested in the core franchise, but it’s an inoffensive offering and easily skippable if you’re not interested. Thankfully, the remainder of the mode is a nice compilation of single races, grand prix, and some unconventional game types of varying quality. Survival mode is probably the most sound of the bunch and plays out almost identically to normal races except that the bottom three racers are eliminated at the end of each lap.

But bringing up the bottom of these additional modes is perhaps Team Sonic Racing’s most downright awful feature, Daredevil races. With limited time on the clock, you’re asked to drive past pylons placed throughout a course attempting to trigger a score multiplier by passing its red side or gain bonus points by drifting through its yellow side. The issue is that it’s never explained how to actually achieve the task effectively, and I finally just gave up after repeatedly getting a bronze medal on the first Daredevil race regardless of putting in over an hour of effort. There was seemingly nothing more I could do and no further explanation of how to do it even if there was. It’s easily one of the most infuriating game modes I’ve experienced in years and places a real damper on the Team Adventure experience. 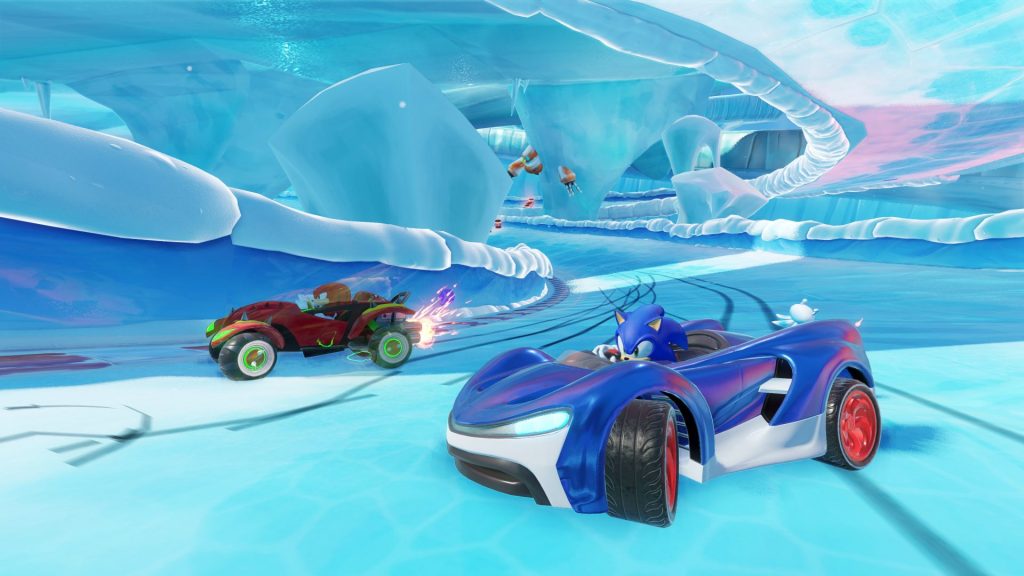 "There’s so much to love here, and it’s even sweeter at the game’s budget launch price."

Not only is there a fantastic selection of classic Sonic heroes and villains to choose for races, but Team Sonic Racing also grants you the ability to upgrade and customize your characters’ cars through various paint jobs, vinyls, and stat-altering parts. These parts are obtained through in-game loot boxes opened by using credits earned through winning races, and I only occasionally found myself annoyed by their addition. Getting yet another single-use bonus item for a race wasn’t nearly as useful as getting a cool upgrade I wanted for one of my vehicles, but I at least applaud the developers for evading the practice of pay-to-play loot box gambling. Earning credits never took long, so I never had to wait more than a few races to see if I got something new, and I spent more time than I probably needed to weighing the pros and cons of the different parts and the stats they altered.

Team Sonic Racing also includes online multiplayer across both team play and solo racing. I found it far more difficult to compete with human opponents, naturally, but not exclusively because of my lack of experience. Truthfully, the game’s core design feels exploited by human players and turns the game into a chaotic mess of 12 players endlessly slamming each other around the course, blasting one another with items incessantly, and generally just wreaking havoc in such a way that the game barely feels like a racer anymore. If that type of unbalanced mayhem appeals to you, or if you feel that you’re good enough to compete in such pandemonium, you’ll find that the servers run fine and lag is nonexistent. But I wasn’t able to hang with the big kids and quickly found my way back to the safety of Team Adventure’s normal and hard difficulties instead.

In conclusion, Sonic Team Racing’s rockin’ soundtrack, beautiful and detailed course designs, and plenty of modes and options to dig into makes it an absolute joy to play. There’s so much to love here, and it’s even sweeter at the game’s budget launch price.

Final Verdict:
GREAT
Sonic Team Racing is possibly the most consistently fun kart racer since Mario 64.
A copy of this game was provided by Developer/Publisher/Distributor/PR Agency for review purposes. Click here to know more about our Reviews Policy.