The launch of PS3 exclusive Tekken Hybrid is a comprehensive package of fighting goodness for fans of the series, combining a 3D movie – Tekken: Blood Vengeance, an HD version of the classic fan favourite Tekken Tag Tournament and Tekken Tag Tournament 2 Prologue – a teaser for the game scheduled for release in 2012 but currently enjoying the plaudits in the arcades in its native Japan. 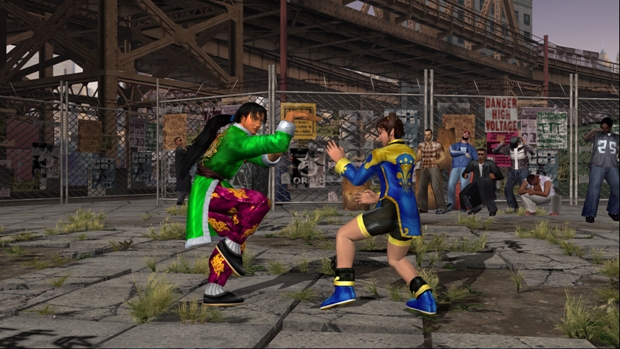 As a gamer, I always aired on the side of Tekken as opposed to those Street Fighter, Mortal Kombat and Virtua Fighter wannabes. I loved the way it looked, preferred the characters and the controls… so I was willing this to live up to its name. And it does. For a budget price, this trio of Tekken treats is a nice addition to any collection. Talk about value for money!

Insert the disc and you have the choice of either watching the Blu-ray film, a computer animated romp that looks fantastic, or pummelling some pixels in either of the games.

The film – Tekken Blood Vengeance 3D – produced by Digital Frontier, the guys behind Resident Evil: Degeneration, Death Note and Appleseed – is a nice distraction from all that button pressing that you’ll be doing. Should you have adequate hardware, you can watch the feature in full 3D too. Its directed by Youichi Mouri, who was responsible for the opening movies for both Tekken 5 and Tekken 6: Bloodline Rebellion. It’s your typical tale of spying, kidnapping and conflict – and it looks lovely.

It’s not a bad film at all but to be honest it’s probably the gaming aspect that most of you who buy Tekken Hybrid will be interested in, and you won’t be disappointed!

For nostalgic purposes, we tried our hand at Tekken Tag Tournament HD first and were whisked back to those halcyon days of its debut in 2000 on the PlayStation 2. It all feels very familiar; there’s a huge roster of characters – from Paul Phoenix, Nina Williams and Michelle Chang to Gun Jack, Yoshimitsu and Kuma the (not so friendly) bear. 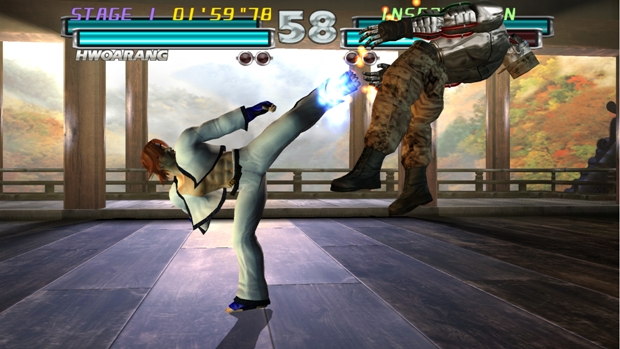 The moves are many and varied and the controls just as simple as they were back in the day, with the usual kicks, punches and throws combining nicely with the myriad combos. It feels fantastic to be playing this again – and the HD makeover is welcome, breathing new life into an ageing engine. Remember, this was a game hailed for its visuals when it was released – and is still considered the best game in the series by some. It is starting to look a little archaic nowadays though, especially when compared with more recent releases such as Marvel vs Capcom 3  and Super Street Fighter IV.

Part of the reason for the plaudits was the introduction of the tag system, allowing an ailing fighter to be replaced by a team mate mid fight so they can catch a breath and let their energy bar replenish. It made for some high tempo action and even allowed a little strategy to creep in. Should one of your characters get knocked out, however, you lose.

I’d imagine that for most people who buy this package, it’s Tekken Tag Tournament 2 Prologue that you’re most desperate to try – but in a sense you’re going to be slightly disappointed. Not because it’s not great fun to play or lovely to look at, but because it’s just too damn short.

The Prologue may only have limited appeal because of its brevity but it’s a nice taste of the future release next year. There are only four playable characters to choose from (all of whom appear in the Blood Vengeance movie): two girls, Alisa and Ling, and two guys, Devil Jin and Devil Kazuya. Each character has a couple of costumes – one from the film and another from the upcoming Tekken Tag Tournament 2. 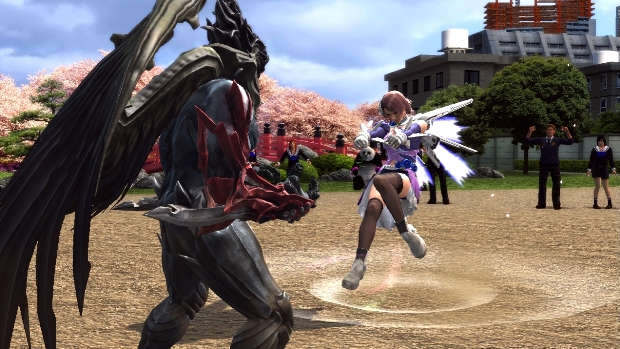 The only real problem with the Prologue is that you only get to play through a few stages. Nevertheless, over the course of the following rounds you’ll get to see some sumptuous graphics and exciting moves with the camera panning around to capture the action. Play this after a session with the HD remake and you’ll realise just how far the graphical abilities of our consoles have come. Even with its HD sheen, the original Tekken Tag Tournament pales in comparison with the follow up. Personally, 2012 and that launch date can’t come quickly enough. To summarise then, this is a truly great package at an excellent price point.

This game was reviewed on the PS3

For a low price this is a good purchase - a decent film, full HD remake and a demo mean the disc should stay in your PS3 for a while

Tekken Tag Tournament 2 Prologue is really short and you are really left wanting more. Even with its HD sheen, the original game still looks a little rough around the edges

Final Verdict:
GOOD
A movie, full game and great demo on one disc is a treat for Tekken fans. While the Tekken Tag Tournament remake is great in HD, it's the Prologue that will take your breath away
A copy of this game was provided by Developer/Publisher/Distributor/PR Agency for review purposes. Click here to know more about our Reviews Policy.