TERA is a fun and accessible game for console players.

TERA is old. Plain and simple, but just like all games that embody the fun factor that we want them to, age really doesn’t bring it down much. TERA mixes things up for the genre it’s in by including real-time combat with dodging, magic, and a variety of attacks all operating like an action game. Originally released in certain areas in 2011, and to a wider audience in 2012, TERA has had a lot of time to make its way into being one of the more popular MMO’s with lots of players still supporting it. TERA’s learning curve isn’t as steep as most other games in the genre, which makes it more of a fit in the console world than other MMO’s would be.

It doesn’t throw too much at you at the beginning, and sports a very clean UI that usually makes sense and can get you where you want to go in just a couple of button presses. These and many other elements make TERA make a lot of sense for consoles, which I’m sure is a delight for lots long-time players of the genre. TERA is indeed a fun game with lots of addicting gameplay loops and grinds that add up to an experience that doesn’t stand out as well as it did several years ago, but still holds up nicely if you’re looking for a neatly organized MMO experience with a decent story. 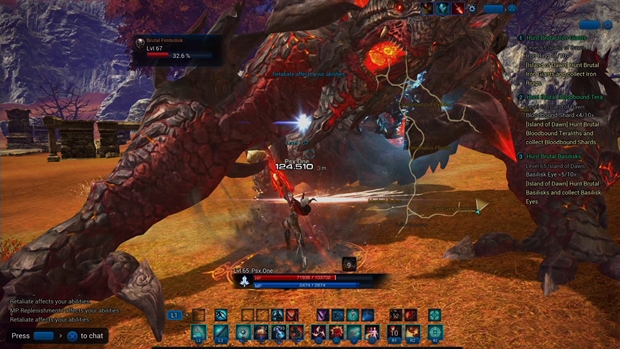 "TERA is indeed a fun game with lots of addicting gameplay loops and grinds that add up to an experience that doesn’t stand out as well as it did several years ago, but still holds up nicely if you’re looking for a neatly organized MMO experience with a decent story."

Speaking of story, TERA’s lore is pretty typical RPG-fare. The two characters of primary focus here, Arun and Shara, titans who wield quite intense power and whose fates became linked in an unavoidable way, so the story does have plenty of fantastical nonsense for enthusiasts of the genre to enjoy. Blue hole really went all out and clearly had too much fun when designing this world, and that’s a good thing.

The gameplay is pretty easy-going for quite a while, as you can do quite a large chunk of the story missions without much help before things really get difficult and force you to get serious about the ins and outs of the classes and races. But once the difficultly does ramp up, it stays there, offering a good, relatively well-paced amount of challenge throughout. The classes you have to choose from is of a pretty solid variety, and there should be at least one class here that speaks to you.

Even though a lot of the character models look pretty good in terms of detail and design, the worlds themselves are somewhat bland in that department, and rarely bring you any designs or aesthetics that you haven’t seen a thousands times before. That being said, I wouldn’t say any of the worlds or dungeons quite cross over into boring territory. they’re just… unremarkable. For as detailed and interesting as the characters can be, I feel like it’s an odd juxtaposition to play them in such a bland-looking world. 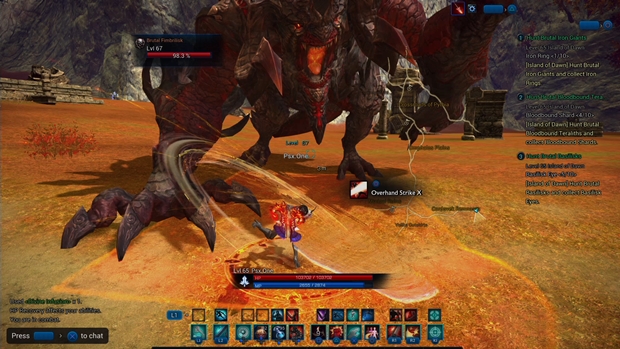 That’s not to say there isn’t diversity in the areas though, there certainly is, I just couldn’t help but notice how shallow they ultimately are. That said, a lot of the effects are nice and really make me appreciate them, particle effects during combat in particular. I say some though, because every time I see something I like, I see something else that looks like it would have made more sense in a game from a decade ago. So overall the presentation ends up being pretty mixed, with nothing really blowing my mind one way or the other, but I do lean toward favorability of the graphics considering how old the game is and how well it seems to be holding up compared to other, newer games in the genre in terms of detail and design.

The technical performance of TERA itself doesn’t fair as well though, with a inexcusably inconsistent frame-rates that probably bring the average FPS to under 30, and rampant texture and asset pop up even on the Playstation 4 pro. When the action settles down the performance certainly improves, but once things get busy, as they often do, expect the game to start chugging quite a bit. Thankfully, even though I found the performance drops unpleasant to look at, the gameplay largely remained in-tact and that’s what really matter I suppose. I have heard lots of talk about crashes, but personally, in my experience, I rarely encountered this. Leveling, crafting, learning new skills all feels pretty good overall. There’s also a fairly good amount of skills to dive into, which is nice. Lots of gold can be had without too much grinding, and the skills are mostly fun to discover and learn once you gain access to them. On top of that, there’s lots of weapon skins other cosmetic options for things, if you like that kind of thing.

The music is pretty good, with some nice melodies sprinkled around the soundtrack. Even though you might not be rushing out to buy the soundtrack for your car, it does get the job done by providing nice, emotional, sub context to a lot of the battles and the tracks usually really kept me motivated. Some of the tracks teetered into momentary greatness before retreating back into more generic RPG-style chord structures, but I did enjoy the good moments enough to overlook the generic ones. 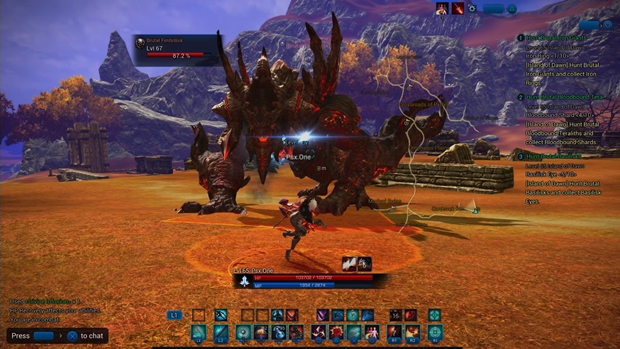 "If you’re an experienced dungeon crawler whose looking for the next step in complexity and depth, TERA might not be your jam, at least not in this day and age."

Voices are also good, while I would have appreciated more of them, what is here is well voiced and voices fit the characters well and there’s a good amount of variation in the tones and delivery styles of different characters. The sound effects coud have had more of a punch to them, though. Lots of the samples for various sounds are tacky and generic, and I feel like slightly more effort in this department could have gone a long way to helping establish some more personality for the game, which is another missed opportunity I think they could have easily addressed for the console version.

Thankfully what we have here is a well-designed game that nails the fundamentals of action-based online RPG gameplay. What it lacks in performance it makes up for in design, and what it lacks in complexity it makes up for overall fun-factor. If you’re interested in TERA, you have very little to lose by trying it out on consoles thanks to the “freemium” model it finds itself in. The world is nearly seamless and huge, the graphics are well-designed and fun, and there’s lots to do in TERA without spending a dime if you don’t want to.

I personally got a little bored later on, as the repetition definitely started getting to me, but as long as you keep your expectations in check and stop yourself from applying 2018 standards to it, there is fun to be had here. I just wish there was more of a reason for those who have already played it 3 years ago on their PC’s to return.  If you’re an experienced dungeon crawler whose looking for the next step in complexity and depth, TERA might not be your jam, at least not in this day and age, but if you are mainly a console gamer and interested in dipping your toes into the MMO genre, the console version of TERA is a great place to start.

TERA is still as amusing it's ever been, and some console-friendly optimizations make it feel right at home on your TV.

TERA is old, somewhat shallow compared to others in the genre, and doesn't give veterans much reason to return.

TERA may look past its prime on consoles, and maybe it is, but it's still a fun and relatively accessible Action-MMO Role-playing game that fits perfectly in the console space.

A copy of this game was provided by developer/publisher for review purposes. Click here to know more about our Reviews Policy.
Tagged With: Bluehole Studio, en masse entertainment, pc, ps4, TERA, Xbox One