The Adventures of Shuggy Review

Shuggy is a vampire whose grandfather just died, and with him kicking the bucket, Shuggy inherited a house, infested with other vampires, poltergeists, zombies, robotic chickens and other unruly, weird things. The Adventures of Shuggy sees us, Shuggy, travelling through the 100 rooms of the house and clearing up the entire mess. That is the premise of the entire game, and that is what kicks off a very entertaining experience. 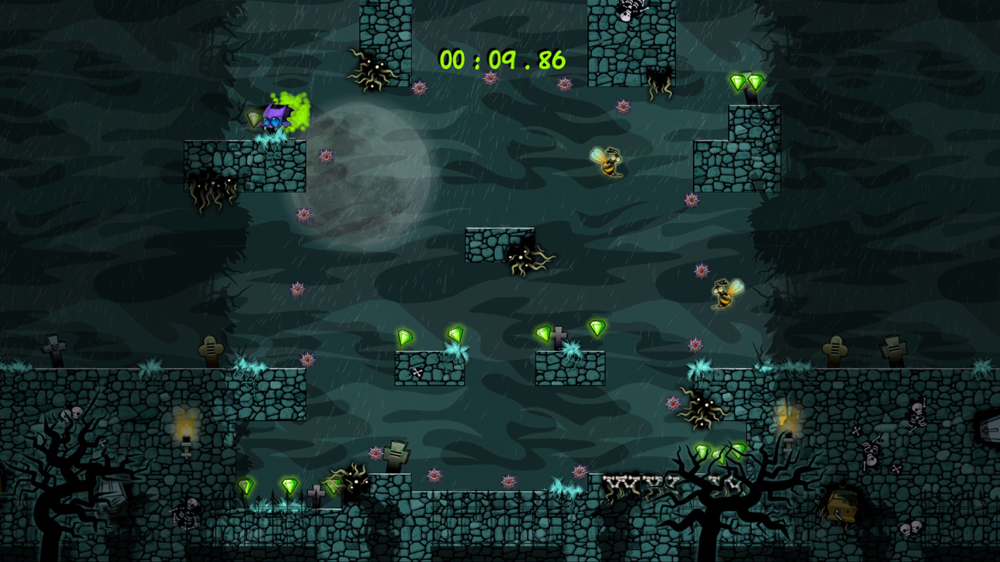 It not only looks fun, it IS fun.

Travelling through the monstrously huge house is a lot of fun, so much so, that even though it’s not necessary for us to go to all the rooms in the house, I did. And I’m not even a completionist- it was just too much fun to miss out on.

Stages in Shuggy mainly have you jumping, solving puzzles, collecting gems, avoiding enemies and the sort. The mansion in which the game is set consists of 100 rooms in total, and each is a level on its own. Completing levels earns us keys, which we can use to enter other rooms, so we can clear them of the zombies and other things that infest them. Levels in Shuggy are basically short dosages of fun, each throwing something new at you which can be completed in a time span of 5-15 minutes.

Every time you as much as touch an enemy or a spike or a dangerous obstacle or something, Shuggy dies, and the levels restarts from the beginning. This can be really frustrating sometimes, especially in the longer levels. Having something like a health bar, or maybe a checkpoint system would have made this problem obsolete, and they wouldn’t even  take a lot of time to be incorporated. The fact that the developers did no6t include these is very disheartening.

You will hardly ever see a game with as much gameplay variety as Shuggy.

To complete a stage, you basically have to collect all the baubles and solve the puzzles. You can rotate the screen to make Shuggy float down, jump up, jump sideways and the like. You can eat stuff to increase or decrease your size, or you can even gather small orange creatures and have them do some stuff for you. The gameplay is pretty straightforward, but it’s a lot of fun.

However, the fact that the control scheme is a little iffy hampers the gameplay somewhat. It isn’t exactly a bad control scheme, just very unsual, and it takes some time getting used to.

Level design is awesome, with each new level offering something completely different. Each new levels has a different, innovative puzzle, a new way to solve it, and the fact that it isn’t all too long, rather a short burst of fun, makes it very good. The variety in this game is tremendous, and you’ll never, ever get bored of what you see.

There is a co-op mode as well, which adds 36 more levels, which are as much fun to play as the single player mode. Basically, four players can locally team up to complete puzzles and collect the collectibles and get through the stages. It’s a whole lot of fun, and complements the variety and replay value of the game in more ways than one. 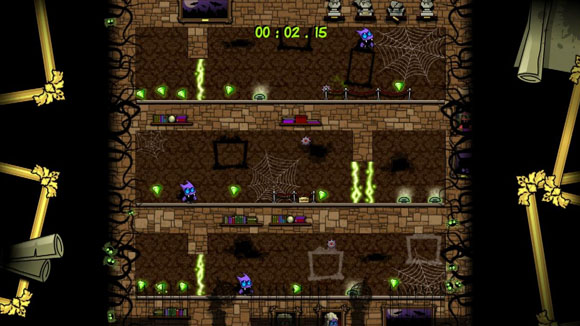 The difficulty can put some people off, but given the pros of the game, you should be able to look past the cons.

Ultimately, The Adventures of Shuggy is a very enjoyable game. With it’s charming comic book style presentation, extremely fun gameplay, unbelievable variety, extremely high replay value and really good boss battles, you’ll definitely be able to get over the minor mistakes that it does make.

Controls can prove a little tough to get used to; Difficulty can be really brutal sometimes;

Final Verdict:
SUPERB
The Adventures of Shuggy is a highly enjoyable game that everyone can have fun with.
A copy of this game was provided by Developer/Publisher/Distributor/PR Agency for review purposes. Click here to know more about our Reviews Policy.