The Banner Saga 2 is a direct and perfect continuation of the 2014 original in every way possible. Rather than re-inventing the wheel or trying something entirely new and wildly ambitious, indie development team Stoic has decided to take a good look at the first entry in this planned trilogy and vastly improve upon it with a number of tweaks and minor additions. And while one cannot possibly give The Banner Saga 2 any points for innovation or freshness, you have to applaud the overall experience and how unafraid it is to take players to some very bleak, very dark places. This game has a story to tell, and it’s going to tell it no matter what.

The Banner Saga 2 begins with Chapter 8, more or less right where the original game ended, and the stakes are higher than ever before. The game tells a story about a world that is swiftly coming to an end, and there is always an inevitability around that fact- that story doesn’t hinge around anyone trying to stop it from happening, but rather on everyone trying to survive it. It’s a bleak setting that rarely lets up, and the game portrays the powerlessness and the helplessness of its wonderful cast of characters very well.

"It’s a bleak setting that rarely lets up, and the game portrays the powerlessness and the helplessness of its wonderful cast of characters very well."

Like the original game, The Banner Saga 2 places a premium on player choice and agency. The game has the option to import save files from the first game, and the choices you made earlier come into play right from the get go, with events at the end of the first game dictating something as simple as who the main protagonist of the game is going to be- Rook, the perennially depressed hunter-chieftain, or his daughter, Alette. And practically everything you do has an effect on how the game progresses and how the story twists and turns- assign too many people in your caravan to collecting food? You may get a comfortable buffer of resources, but you may leave yourself vulnerable to attacks if you commit too many people to it. Have too many characters on the field of battle, and not only do you run the risk of losing some of your strongest, best characters in battle, but you may find yourself without food to feed your people.

And trust me, you’re gonna want to feed your people, because it directly affects their morale, and morale is very important when you get down to the ugly business of battle. A squad of warriors high on morale can be deadly if used properly, whereas a squad low on morale can crumble within a matter of seconds.

Even on the field of battle your choices have an interesting and very, very apparent ripple effect. Losing battles is always a possibility, and can bring with it severe casualties, both permanent and temporary. Perma-death, a hallmark of the genre, is naturally here in full force, but The Banner Saga 2 gives you several other considerations to keep in mind as well. Losing can lead to characters being injured and hence unfit to participate in battles or other activities for a significant period of time, and morale ties into this directly as well- a defeated squad is a demotivated squad and probably wont pull its weight when it comes down to it. 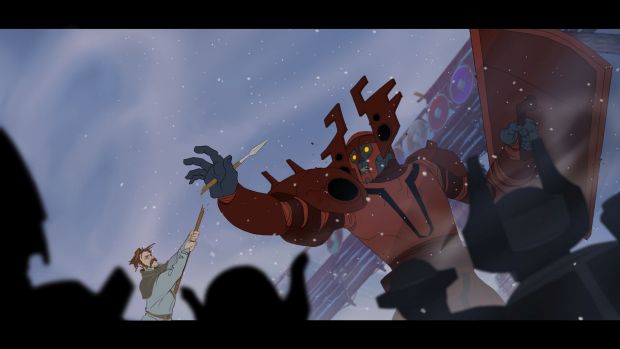 "Even on the field of battle your choices have an interesting and very, very apparent ripple effect."

And thankfully, the battle system has received some significant upgrades here- one of the most significant being the addition of the new Horsemen class. Their addition may not have had any significant effect on the narrative, but in battle, they can give you or your enemies serious strategic advantages. Horsemen can take an additional turn for movement after attacking, and their charge abilities can be deadly and extremely effective if used properly.

Be careful though- haphazardly going on the offensive in battles can spell a quick death for your units. Every unit has two stats, when you get down to the basics- armour and health, which are both directly proportional to how much a unit can defend and how much it can attack. While going all out and attacking a unit’s health can seem like an attractive strategy for those of us with short fuses, it usually turns out that chipping away at enemies’ armour and then dealing deadly attacks later on in battles can be extremely effective.

What’s more, positioning is paramount in The Banner Saga 2. On the offensive side, several attacks (such as the Horsemen’s charge abilities) can damage any and all units in their vicinity, for example, both friend and foe. On the defensive side, you can use some of your larger tank-like Varl units to block the paths of your enemies and essentially serve as shields for some of your physically weaker units, like your archers. The new Poet class, in fact, is almost too reliant on positioning- if the Poet sees one of your units defeat an enemy unit, he can sing songs about it to increase your squad’s morale, but for that he has to be able to physically see the victory. If his line of vision is being blocked, he won’t be able to write any victory songs. The addition of destructible environments also adds a sense of strategy to an already nuanced and layered battle system. 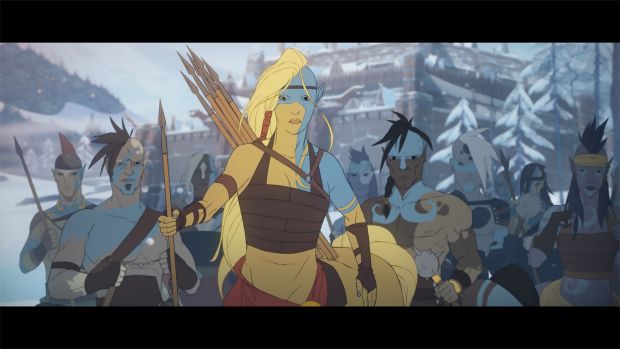 "The way The Banner Saga 2’s mechanics all manage to bleed into and affect each other, across gameplay and story, is quite an achievement."

The fact that the game shakes things up in terms of battle objectives- “kill all enemies” is not the extent of it anymore- helps with that a great deal and manages to successfully tackle a great many issues with the first game’s combat, but it has to be mentioned though that by the end of the game- which was around 10-12 hours into the story for me- the battle system may start feeling a bit repetitive. Also, while the game is usually fair with how challenging it is, in some of the later battles, it starts creating situations and circumstances that feel like they’ve just been put there to make the battle artificially harder, and it stands out so much because of how consistent the game is up until that point in this regard.

The way The Banner Saga 2’s mechanics all manage to bleed into and affect each other, across gameplay and story, is quite an achievement. The game usually manages to sustain a wonderful presentation style, with a beautiful 1960’s Disney animation style and a moving soundtrack composed by Austin Wintory. It is, however, extremely important to note that you’re probably going to get out a lot more from The Banner Saga 2 if you’ve already played the original. The game is a direct sequel in every sense of the word, and it doesn’t shy away from the fact. Of course, it tries to familiarise new players with its world and its inhabitants with short videos and descriptions, but chances are that you’ll probably enjoy the experience a lot more if you’ve already played the original.

It’s safe to say, then, that The Banner Saga 2 is one hell of an experience. It can be faulted for maybe playing it too safe and mostly sticking to what the original already did so well, but regardless, it’s an enjoyable experience boasting of a bleak, harrowing tale, a great cast of characters and strategically enjoyable battles. It takes a good, hard look at the strengths of the 2014 title and builds on them in the best ways possible. The second act of this planned trilogy is a strong one, and sets up the conclusion very well.

Not a very good starting point for newcomers; Inconsistent difficulty; Mostly retreads old ground; Battles can become a little repetitive near the end.

Final Verdict:
AMAZING
The Banner Saga 2 improves upon the original in almost every way possible and is, as a result, one hell of an experience that shouldn’t be missed.
A copy of this game was provided by Developer/Publisher/Distributor/PR Agency for review purposes. Click here to know more about our Reviews Policy.