The Expendables 2: The Video Game Review

A bland and haggard take on the twin stick shooter.

Posted By George Reith | On 23rd, Aug. 2012 Under Reviews | Follow This Author @GNReith

Any licensed game that has to tell me that it is “the game of the movie” is often going to be bad. Call it prejudiced, but if a game has to actually tell me it’s a game, it’s likely that it’s barely fun enough for its contents to actually be called gameplay. The Expendables 2 follows this trend, actively professing its chosen medium and also sucking really hard. Read on for a crash course of all the reasons why the film license should have just stayed on the big screen. 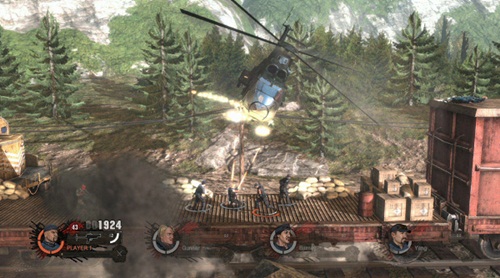 A helicopter in a shooting game?! Imagine that!

Following in the footsteps of the film series, The Expendables 2 attempts to offer over the top action on all fronts. It takes on the guise of a twin stick shooter for this purpose but, whilst there are enough bullets flying and grenades exploding to match the Expendables license, the gameplay itself is intolerably weak. Twin stick shooters normally succeed through their simplicity, but The Expendables 2 muddies such elegance with a plethora of issues. Alarm bells ring immediately due to the control system. It all seems fine, except for the fact that you have shooting functions mapped to the right trigger. For any other genre this would be fine, but when has a manic top down shooter ever succeeded with a separate shoot button? Shooting is often automatic in other twin stick games when you move the right analogue stick to aim, and mapping it to the trigger makes the shooting feel unnecessarily slow at times. Not to mention how badly your hand can cramp up when you have so many bad guys to take down at once. Ouch!

If the game was just about frantic action, it might be excusable. After all, it’s not like Geometry Wars or Contra ever offered much complexity, and these two series are at the peak of their respective sub-genres. The issue is in how many game mechanics seem redundant. Grenades are present, but you have to stop and aim an on screen cursor to use them, an issue that inevitably slows the pace of the game right down. Cover is available to get you out of the line of fire, but it only works on some objects. Apparently sand bags are adequate, but low walls and buildings are not helpful enough for providing cover from enemy fire. There’s some missed logic in this regard, making the cover system confused and largely redundant. You also have grapples and signature killing moves when you get into melee range. Considering you have a quick melee strike that usually kills in one hit, why do you need a grapple and instant kill? I understand the need to give players bang for their buck, but having so many pointless additions like this just slows things down. 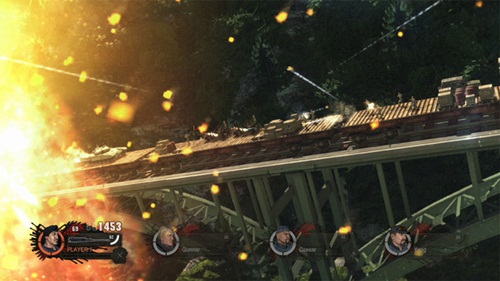 Things fare slightly better when it comes to longevity. On the poor side of the coin we have levelling mechanics, a last ditch attempt used to add replay value to the package. Spoiler alert: It doesn’t work. Levelling is basic, and it takes an age to get the increasingly predictable passive upgrades. Whilst the attempt at character customisation is lacking, the package is bolstered elsewhere. The game is, as with others in the arcade shooter mold, best played with others. Enter four player local and online co-op. It’s pretty much the only way to makes the Expendables playable, but it can bring a lot of laughs when the enemies come thick and fast. Throw in twenty fairly lengthy levels across four chapters and you have a reasonably long game.

Whilst the game offers a lot of content, (albeit poor content) the thematic elements that actually use the Expendables license are bizarrely lacking by comparison. The narrative is minimalist, to put it kindly, and the actual cast is laughable. With only four of the Expendables showing up, things already feel a bit light in the character department, and the fact that only Hale Ceaser and Gunner Jensen are voiced by their original actors is an obvious defect that degrades the game’s narrative somewhat. 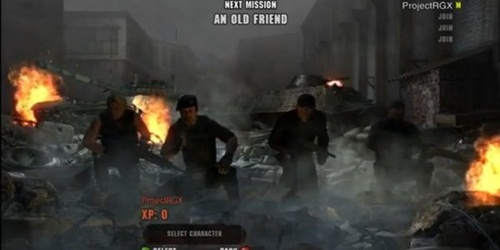 Hmmmm. I’m pretty sure there were more of you than this in the film…

It isn’t just the voice acting that frustrates on an audiovisual level, however. Between the dull music and endless shades of pale green and brown, The Expendables 2 looks and sounds like a million other lifeless action games out there. Technically the graphics aren’t all that bad, but stiff animations and the lifeless visual direction don’t really help when it comes to the overall production values of The Expendables 2.

So what we’re left with is a mixture of negatives that has almost become a stereotype for the licensed shooter genre. Sure, the maths might work out in terms of the ratio between cash and lifespan, but it’s false economy when you consider the gameplay on offer just isn’t very fun. The license is used poorly, guns feel weak, controls are sketchy and it doesn’t even look nice. Sure, it can be a laugh with a few friends, but the same can be said of many superior titles. As it is, The Expendables 2: The Videogame offers very little over competing titles. Most other twin stick shooters are simpler, more fluid and much more addictive. The Expendables, by comparison, is stuck in a halfway house that grants it the worst of the twin stick and third person shooter genres; a boring and repetitive gameplay structure with unintuitive controls and a dodgy cover system. Avoid where possible.

Has at least some characters from the film, 4 player local and online co-op, Lots of Levels

A bland and haggard take on the twin stick shooter, The Expendables' all star cast is not enough to redeem this repetitious mess of poorly designed and often unnecessary mechanics

A copy of this game was provided by developer/publisher for review purposes. Click here to know more about our Reviews Policy.
Tagged With: ps3, PSN, The Expendables 2 Videogame, XBLA, xbox 360