GamingBolt speaks to Neocore Games about the next iteration in the Van Helsing series.

The Incredible Adventures of Van Helsing 2 is a role-playing video game that was developed by the NeocoreGames, a game development studio based in Hungary. The series is inspired by the novel Dracula by Bram Stoker and showcases a young Van Helsing.

In order to know more about the game, we got in touch with PR & Community Manager Orsolya Toth and Producer Zoltán Pozsonyi. Check out their response below.

Rashid Sayed: First all tell us a bit about the engine that will be running The Incredible Adventures of Van Helsing II? Can you share more in-depth tech details like number of simultaneous light sources, Parallax Occlusion Mapping and Screen Space Reflections support, whether it will have a full dynamic shadowing system, Global Illumination and tessellation solutions, etc?

Zoltán Pozsonyi: The engine running Van Helsing was built in-house, which always gives us the freedom to adjust it to the technological requirements of any current projects. The fixed top-down camera view in Van Helsing limits the available choices to tweak with the graphics, but compared to the first game, I’d say the lighting system is what we worked on the most for the sequel, namely the global illumination and the shadows, and we also upgraded the blending of the physics and the particle system.

We’re especially proud of the new weather effects that the engine of Van Helsing II can generate: the mist, the rain, the snow and the wind effects are all part of the new dynamic weather system, which creates much more realistic environments to get the players even more involved in the atmosphere of the game.

We already used Parallax Occlusion Mapping for our previous games like King Arthur II and sometimes they return in our current games too but they don’t have a significant role regarding the Van Helsing series. We don’t really use tessellation either: on account of the top-down camera view our artists know exactly how to create the details. 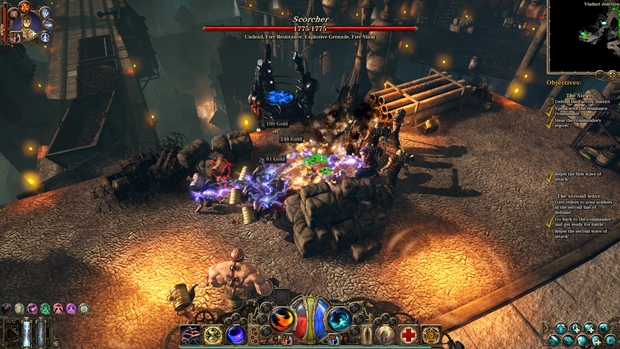 "There are more side-quests this time, also the newly introduced Resistance Management will let the player decide which quest they’ll rather do themselves."

Rashid Sayed: Are there any plans to release mod tools or an SDK for The Incredible Adventures of Van Helsing II?

Orsolya Toth: Not really. There are too many details in our games that are created manually and trying to use the released mod tools would be a terribly difficult experience for all users, if not straight impossible.

Rashid Sayed: The Incredible Adventures of Van Helsing II promises to have a darker deeper world compared to the original. Can you please explain in detail how this will affect the gameplay in the sequel?

Orsolya Toth: The sequel’s story will be more complex and contains decisions that will affect later gameplay. The atmosphere is undeniably darker – our protagonists are in the middle of a civil war, after all -, but that doesn’t mean that we’ll skip the cheeky humour of the first game, quite on the contrary.

Rashid Sayed: Will the story elements of the original tie up with the sequel in anyway?

Orsolya Toth: Van Helsing II picks up the story where the first game left it off, but it could also be considered as a separate game. The sequel begins with a summary of the previous events, making the current situation very clear to those who didn’t play through those adventures. So the story continues, yes, some elements will even return and players of the first game will surely notice those, but the sequel is an entirely new story. Gameplay-wise, the story decisions of the first game don’t affect the events of the sequel in any way, however, characters can be carried over with all skills, equipment and gold.

Rashid Sayed: How open is the world this time around? Furthermore what kind of changes have you done to the mission structure?

Orsolya Toth: There are more side-quests this time, also the newly introduced Resistance Management will let the player decide which quest they’ll rather do themselves. Van Helsing is not an open-world game, the player is driven by the story from one map to the other, but within the separate levels the player has the freedom to decide where to go and what to do first. 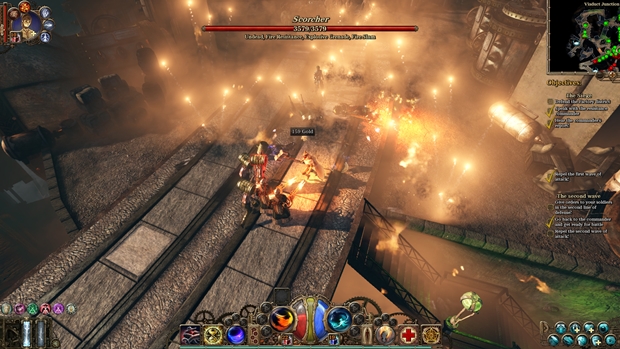 "The three different classes – Hunter, Thaumaturge and Arcane Mechanic - have their separate base models with different appearances and item sets, apart from that, characters are customized visually by their equipment, as in any other action RPG."

Rashid Sayed: Tell us a bit about the new monsters and vampires that our hero will be facing against this time around? Furthermore how have you improved their AI?

Orsolya Toth: Van Helsing’s archenemy is General Harker now, the former military commander of the Borgovian army and he has a brand new legion on his side full of creations of mad science. Besides these creatures there are many new monsters and villains out in the open. Just to name a few, Van Helsing will slay Giants, Schattenbeasts, Windbeasts or Spiritwalkers when he enters the snow-covered forbidden wilderness of the Thunderhead Mountains.

To tell the truth, the enemy AI was quite a challenge. At first we made some experiments with a very advanced enemy AI, using advanced tactics, evading attacks with good dynamics, stepping out of the range of AoE spells or going around the zone of damage. It was simply not fun that way but I must tell that we did not give up entirely on the thought as in the sequel there are quite a few elite monster groups who have the special “ability” of combining their skills and acting together as a group when attacking the player and their allies.

Rashid Sayed: What kind of changes can players expect in the co-op mode?

Orsolya Toth: First of all, there are three totally different character classes, so co-op should be a lot more fun now with specialized tank/DPS characters. Otherwise, there are a lot more items in the game now and they all have a lot bigger influence on the visual side of characters so players can create unique appearances for their characters now.
Rashid Sayed: What kind of customization features are you packing in for the main protagonist? Furthermore will players be able to control Katarina in some way?

The three different classes – Hunter, Thaumaturge and Arcane Mechanic – have their separate base models with different appearances and item sets, apart from that, characters are customized visually by their equipment, as in any other action RPG. Players can customize the behavior of Lady Katarina, tell her how she can support them in the most suitable way, such as how to attack (melee or ranged), who to target first, what to collect, etc. But she has her own will, quite a strong one I must say, and will not take direct orders from any mortals 🙂

Rashid Sayed: You have hinted previously that you plan to bring the game on next gen consoles. Are we going to see a PS4 and Xbox One version anytime soon?

Orsolya Toth: We can’t promise anything yet, but we’d also like to see the Van Helsing trilogy arrive to consoles. So I guess we’ll see if that’s possible or not. 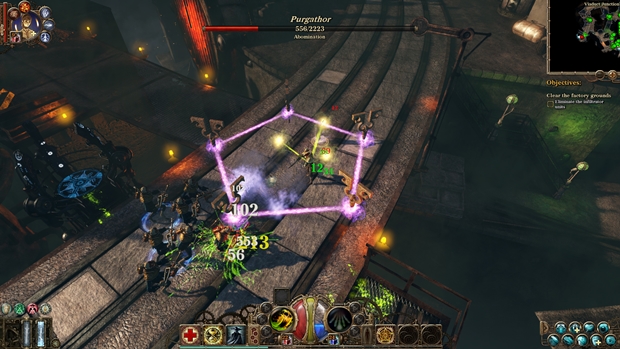 "Van Helsing II supports 4-player co-op to go through the story campaign, and 8-player PvP mode. It is fun hunting down monsters an’ all, but hunting down your friends with an evil grin on your face… priceless! "

Rashid Sayed: Talk us about what kind of improvements have you made to the skill tree and weapons in the sequel?

Orsolya Toth: As I mentioned before, characters of the first game can be imported into the sequel, that also means the skill trees are not replaced with a totally new one but expanded instead. Players can choose from about 60-70 separate skills per class, so we do hope that everyone can create their own unique character build that they feel comfortable with while playing. We added new types of weapons too, serving the same customization purpose, such as crossbows, staves, axes and maces. We also have new types of skills that work very differently from the skills of the first game.

With the new drawing skills, you can draw any shape for your fire or ice walls, be it a circle around you or a straight line, blocking the way for a moment. The charging skills are also a new addition, the longer you cast them and the more mana you spend on them, the more damage they’ll do. And last, but not least, the pentagram skills are also introduced in the sequel, very strong skills where the swiftness and skillfulness of the player are also very important.

Rashid Sayed: The original game did not have any classes in them but the sequel does. What was the inspiration behind putting them and can you explain briefly each of them?

Orsolya Toth: The first concept was to only have one class, the Hunter and incorporate all the skills within that class, giving players the option to create their own specialized “classes” while playing the game and not in the main menu with zero experience with the game, not knowing what skills the classes may have.

It sounded really nice for us, but it turned out that this character building model didn’t really appeal to our community and they wanted us to add more traditional classes that they can select before starting the game and that used different weapons and didn’t look the same. Long story short, we added those classes based on the requests of our players.

Now, the original class, the Hunter has basically two different setups, a typical melee/tank type of character wielding swords, maces or axes and the ranged character using crossbows, pistols or rifles and some spells too of course. The Thaumaturge is basically a mage-type of character can raise custom-shaped walls of fire for offensive and defensive purposes as well and is mainly focused on dealing ranged damage with spells that have an area of effect such as ice bolts, lightning blasts, shadow orbs and fiery meteors. Additionally, the Thaumaturge has strong crowd control spells, like confusion and fear and mind-controlling abilities. The Arcane Mechanic is a middle-range specialist class, he uses a lot of mechanical gadgets and summons creatures to aid him in battle.

Rashid Sayed: How is the multiplayer shaping up? What kind of modes can players expect from it?

Orsolya Toth: Van Helsing II supports 4-player co-op to go through the story campaign, and 8-player PvP mode. It is fun hunting down monsters an’ all, but hunting down your friends with an evil grin on your face… priceless!

Zoltán Pozsonyi: I think the prospects are really nice. An improved CPU-GPU management would do well for PCs in general, especially if it’s supported by the proper debugging tools for developers. The easier porting between Microsoft platforms is also very useful for a game developer but to tell the truth we cannot answer this question properly yet.

DirectX9 is still present on the PC gaming market and the ratio of DirectX10 is still very significant. Probably the Van Helsing series will get its DirectX12 version too in the future but mostly only for testing purposes. Till DirectX12 gathers enough ground to be the primary version, the Van Helsing series will already be history in terms of technical development. But I do hope we can utilize its numerous benefits for our future projects.