As a self professed “core gamer” I have always considered the humble flash game to be beneath my well honed expertise. With games such as Farmville hoarding so many hours within the casual gaming scene I think I am well justified in hating on them mercilessly. Occasionally though one may peak my interest and, having recently seen Tommy Wiseau’s hilariously awful dark comedy “The Room,” the idea of a Room game seemed too good to miss. The game follows the film’s script pretty solidly, but tells the entire story from Johnny’s perspective. A lot of the various mistakes and mysteries of the film are elaborated on in the game, and the new material and dialogue fits right in with the tone of “The Room” From the ridiculous dialogue, to the collectible wooden spoons, this game uses its film license in the best way possible.

The game controls with simple mouse clicks in the same vein as any other point and click adventure title you may have played before. The action is mixed up with a few extremely comical turn-based battles and a football throwing mini-game, which are both completed with well timed mouse clicks. It’s not exactly inspired when it comes to gameplay mechanics and there are a few WTF moments, but that’s not exactly the point with The Room Tribute. This game is about the humour and the dialogue, which are both brilliantly realised. 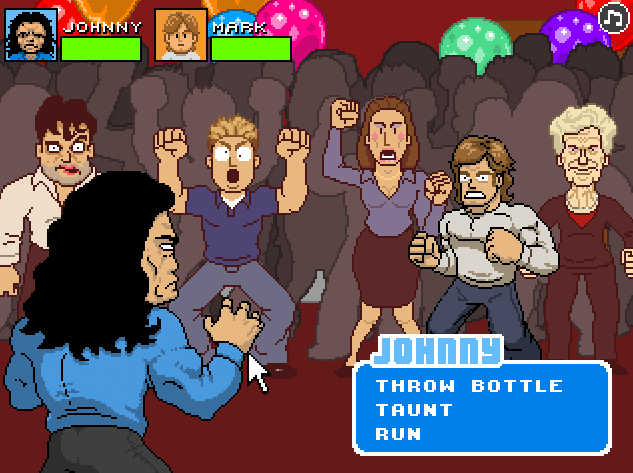 For those of you who have experienced any other titles that Tom Fulp has worked on, you’ll be glad to know that the visual style of The Room Tribute is easily on par with his other works. The game looks like something straight from the SNES, but the attention to detail is fantastic with some truly side splitting sprites and animations throughout. The direction taken visually really works for the game, and for a flash title the technical capabilities of the graphics are pretty insane as well.

The audio in The Room Tribute is awful, but in the best way possible. It contains that one repetitive theme and all the cheesy power ballads from the film with a retro midi arrangement. Fans of the film will find it hard not to snicker. The sound bites for some of the characters also had me cacking myself. Of all the clips they could’ve used they picked the best one of all. I’ll never understand quite how Wiseau is able to chuckle as he does in such a gormless way, but it seems more entertaining every time I hear it.

The question of lifespan becomes almost irrelevant for a game that is free to play, but it must be said that The Room Tribute has a surprisingly large amount of content. Rushing through the main story took me about an hour, but if you manage to find all the wooden spoons in the game you can unlock an alternate ending. There are also lots of little in joke secrets you can find that will make map exploration a worthwhile adventure. 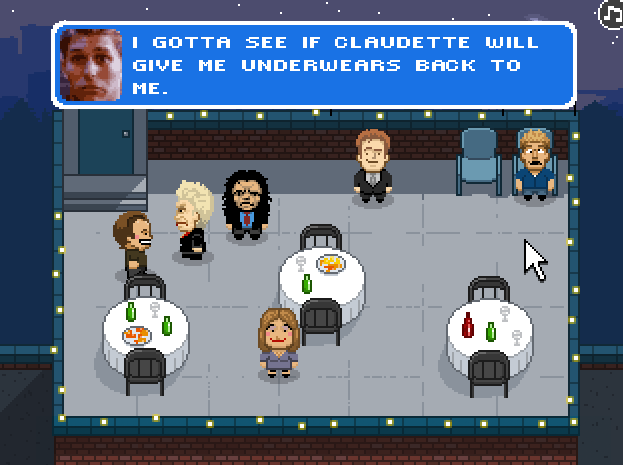 Considering the game is free, there is absolutely no excuse for those who enjoyed “The Room” to not try the game. Consider it essential gaming in fact. That said, those who haven’t sampled the dramatic delights of Tommy Wiseau should look for their kicks elsewhere. You just will not understand quite what the game is going for. The Room Tribute is a loving homage to an almost perfectly shite movie. It just does it’s own thing, and I wouldn’t have it any other way. Those interested can find the game here For those of you who don’t understand why this is one of the greatest movies ever just click below.

The Bad: A pointless endeavour for those who haven't seen the movie, Some frustrating puzzles

Final Verdict:
EDITOR’S CHOICE
From the creator of Castle Crashers and Alien Hominid comes a tie in flash game to the one of the best awful films ever made. It captures the ridiculous humour of Wiseau's cult hit “The Room” within a retro sensibility, and to top it all off is free to play
A copy of this game was provided by Developer/Publisher/Distributor/PR Agency for review purposes. Click here to know more about our Reviews Policy.