Some great ideas don't quite get this Soulslike out from the shadow of those giants.

Once in a long while, a game comes around that creates a new paradigm and spawns successors for years to follow. The Surge is certainly not that special kind of game. Dark Souls is that cult phenomenon that spawned such pretenders, and the series deserves all the praise for it. The Surge is an interesting sci-fi take on the Soulslike, but it sits squarely within the shadow of its inspiration.

In a world ravaged by overpopulation and threatened by global warming, CREO is the good guy company providing jobs for everyone and dealing with the ozone’s deterioration with the technology it develops and sends to space. So of course this squeaky clean public image is a facade. Wheelchair bound Warren finds a job with them hoping to help their virtuous mission, and is quickly, forcefully surgically bioimplanted with an exosuit. A glitch in his connection labels him defective, and he is quickly left for dead in the scrapyard, made to fend for himself. 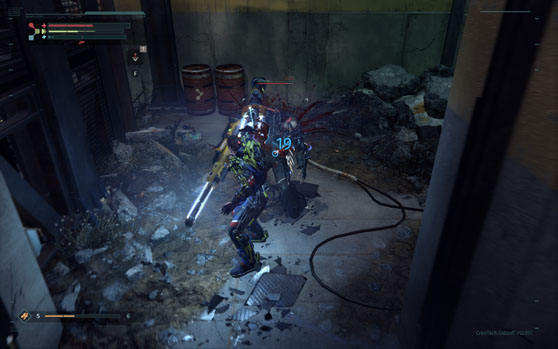 "While there is a ton of depth to the customization that I’ll get to in a minute, the basic combat loop is still focused on directly engaging one or two combatants at a time,"

As sci-fi stories go, there is very little here that you haven’t seen before. Shady company has an agenda and mistreats their staff to an insane degree is one of the pillars of the genre, and given the subtlety that the Souls series used to tell the tales of their elaborate worlds, such tropes feel lazy next to the unavoidable comparisons. Luckily for The Surge, and like the series it takes off from, the story doesn’t have to be of much consequence if you don’t want it to be.

Core gameplay in The Surge borrows fairly liberally, somewhere between the measured pace of Dark Souls and the brutal urgency of Bloodborne. While there is a ton of depth to the customization that I’ll get to in a minute, the basic combat loop is still focused on directly engaging one or two combatants at a time, managing a stamina bar and your health. Warren can attack quickly horizontally or deliver more brutal and damaging vertical strikes, and leap in whatever direction to quickly get out of the way of an enemy advance, or close in to strike first.

While The Surge nailed the basic flow of combat and comes out as one of the most competent Soulslikes for it, not all of the subtleties made it. You can’t do much to cancel a movement once it’s started, which changes the flow of combat from feeling more like a dance with a partner into a drag out brawl. 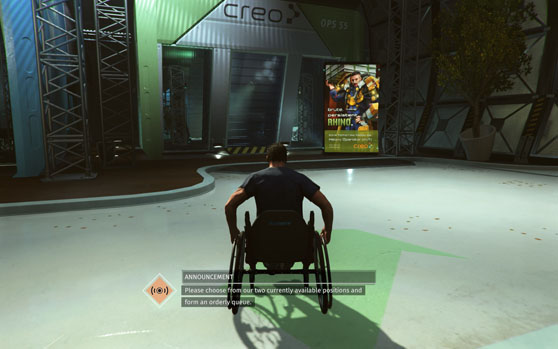 "The tension bar creates an interesting player choice: how risky can I afford to get against this enemy right now…"

While you’re thinking carefully about whether you can afford to buy an engagement ring for your horizontal swipe, the game also includes a tension meter that builds with each hit and drains while you’re backing off. If you can get the bar high enough, a quick hold of a button could launch a dismembering finishing move that could save you, or you could get bodied by their series of attacks. The tension bar creates an interesting player choice: how risky can I afford to get against this enemy right now, and if I do, could I be rewarded with a critical attack to end this quickly?

Critical attacks tie into a dynamic targeting system that was one of the most unique ideas The Surge had to show. When locked onto an enemy, you also choose which area of the body you’re attacking. This has little bearing on the actual flow of combat, but choosing to target an unarmored area will, obviously, deal more damage. The other side of this coin being if you attack an armoured portion and get a critical attack on it, you’ll rip off what’s left of that armour or weapon and claim it for yourself.

From these bits and pieces you claim from your fallen enemies, you can create a wide variety of armour pieces for yourself, and most interestingly, equip implants found hidden in the world or off of enemies. Implants are swapped in and out freely at the Bonfire stand in, the Ops Centres, and include things other games would lock behind a skill tree. 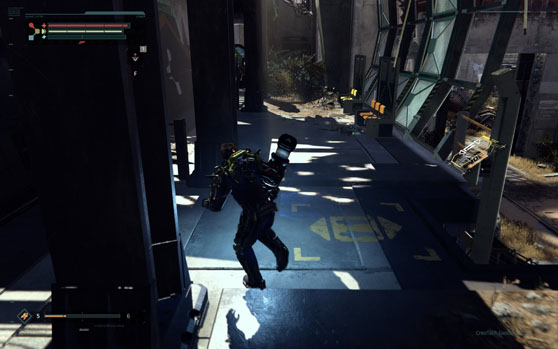 "The idea to make these buffs modular was a brilliant one, and allows players to have complete control of their character build at any time."

The idea to make these buffs modular was a brilliant one, and allows players to have complete control of their character build at any time. Perhaps you’ll carry some extra health packs during the early areas, but later for the boss it’s more important to stack on some damage buffs. It’s all balanced by the power level of Warren acting somewhat as a “weight limit” mechanic.

Leveling up itself also happens at Ops, with scrap currency earned and lost in exactly the way you would expect from a Soulslike. To put the focus on your augments the levelling mostly gives you more power to allocate toward them while scaling health and stamina slightly. In a bid to be more accessible without destroying the curve behind losing your scrap upon death, players can bank scrap at Ops. However, The Surge gives players a multiplier as they gain more and more scrap without banking, still rewarding risky play while allowing players an avenue to eventually grow regardless.

The rest of the game sort of falls into place around the few interesting mutations to the core formula we discussed above. Visually I was never blown away by the textures, and the environments follow the core ideas of looping back in on themselves without ever quite having the same majesty as others in the genre. Sound design is functional, though it doesn’t recall the eerie mumbling of Bloodborne or the haunting melodies of Dark Souls. The implication here isn’t that any of these areas are bad or harm the game in any way, but they simply don’t stand out.

As it turns out, Dark Souls is a really hard legacy to live up to. The Surge has a lot of interesting ideas that mutate off of the core, but the dressing around it can’t really cover the fact that it’s a Soulslike. Very competent at what it does, but also lacking some of the nuance that made it so special to begin with. The Surge didn’t exactly shock me, but I appreciate what it tried to do.

Between Implants, banking scrap, critical attacks and the dynamic targeting system, The Surge layers on some great ideas to the core Souls gameplay.

Buying an engagement ring to every attack creates a weird pace to battles. Tropey story does nothing interesting.

Final Verdict:
GOOD
The Surge is great, and I say that with only a single qualifier - It’s standing in a genre built by games that did more than great. Which isn’t exactly fair to hold against this game, but if you’ve ended the age of fire, woke from the nightmare and torn through Japan, The Surge is going to scratch, if not satisfy that itch.
A copy of this game was provided by Developer/Publisher/Distributor/PR Agency for review purposes. Click here to know more about our Reviews Policy.