Borderlands released last month to great reviews and a fan base more than willing to look past any faults to the very fun experience underneath. Gearbox promised that the game would be supported post launch with DLC, the first of which released on November 24th. The Zombie Island of Dr. Ned (who obviously isn’t Dr. Zed from the main story line) tasks you with killing the off the zombie infestation on Jakobs (one of the games many weapon manufacturers) island. A task that will leave you feeling underwhelmed and ripped off.

There are only a few story quests in the DLC and all of them are boring. Many task you with fighting small waves of zombies as you wait for someone to send something to get you out of whatever area you are in. This mechanic gets old quick as you could expect and makes things feel repetitive very quickly as you go from waiting for one thing to another. Luckily as you wait the characters do say a few funny reasons why it is taking so long. The island itself gives a nice spooky feel and looks very good. The only gripe I have is the fact that you will return to Old Haven, now named Dead Haven, which just seems lazy and out of place compared to the original environments on the island. 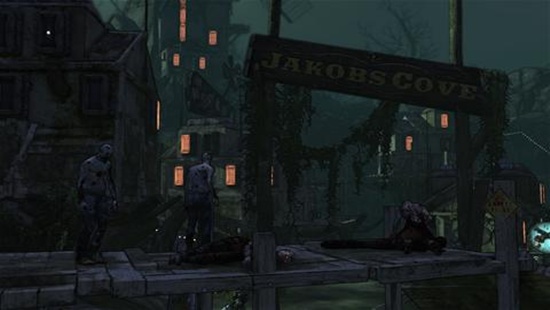 Welcome to Jakobs Island a.k.a. the island of disappointment

There is a new if small cast of characters and even a few familiar ones that you will interact with through out the DLC. They are all very funny and will make you laugh almost every time they speak. However none of them play a huge role other than Ned. Most of them are only around for a single mission preventing them from leaving any sort of lasting effect as some of the original’s characters do.

The thought of killing hordes of zombies will sound appealing to most out there, but there are no hordes to speak of. Zombies travel in small groups that will not pose a challenge for any but the most inexperienced players. Some of the larger zombies can do some damage, but once you learn their tactics they become easy to kill and pose no true threat. 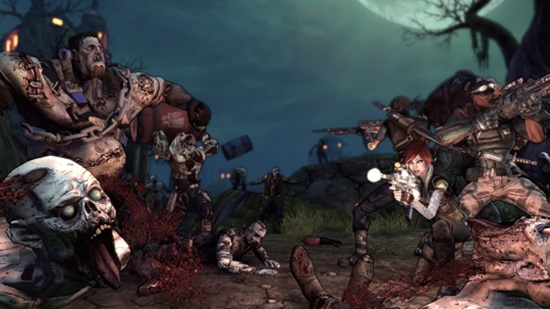 They make it look easy… because it is.

The real threat is the unstable frame-rate. During play I had drops into single digits with only a few enemies on the screen. In some instances the game was completely unplayable for a minute or more resulting in my character being eventually downed and sent back to a New-U-Station. Most of the drops mentioned above occurred during one of the later missions, but there were noticeable drops throughout similar to those in the main game.

Aside from the environment there is nothing new in this DLC. No new weapons, no new items, no new level cap, it’s the same Borderlands in a much more boring place than before. Along with a completion time of four hours or less for experienced players who complete all side missions, this package feels very overpriced and is a waste for those who still enjoy playing the main game. Hopefully future DLC will be more fulfilling, but this is one you will definitely want to skip.

Very short. Very repetitive. No new gear or items. Zombies are not challenging and are too few in number. Terrible frame-rate issues.

The Zombie Island of Dr. Ned is a funny though underwhelming piece of DLC that when all is said and done, isn’t worth your money.

A copy of this game was provided by developer/publisher for review purposes. Click here to know more about our Reviews Policy.
Tagged With: Borderlands, DLC, the zombie island of dr. ned