We put Mike Bithell’s debut indie title to the test on PS3.

Posted By George Reith | On 16th, May. 2013 Under Article, Reviews | Follow This Author @GNReith

Alongside every gamer with time on their hands, I’ve tried my hand at game development in various guises. Most aspiring developers try their hands at a platformer at some point, and you learn very quickly how important basic movement mechanics are from this.

If your running and jumping is smooth and satisfying, the rest of the game normally follows suit. Thomas Was Alone fails to do this, but its minimalist aesthetic, charming narrative and clever puzzles help it over the hump for the most part.

The presentation of Thomas is its most quirky element, and most likely to draw players to the game initially. You play a variety of rectangles and squares, all moving and jumping through block 2D environments. A much more varied soundtrack helps keep things moving, but even this is largely understated. It’s a bold move, and one that is intensely aware of its aims at all times, but this courage doesn’t always translate into an effective graphical style.

There is a major contrast issue with the background colours obscuring certain coloured blocks in a few levels. Moments like this make it hard to work out what’s going on, an issue furthered by the way subtitle texts moves around during gameplay. For all the block charms of Thomas, its simplistic aesthetic only stays fresh and uncluttered for so long.

The visual style plays into the narrative, a story of rogue artificial intelligence programs discovering the limits of their abilities whilst escaping an ominous AI-killing cloud. The story is told through an omniscient narrator voiced by Danny Wallace. He does a great job of giving a dry wit to the proceedings, but the writing itself is a mixed bag. At one moment it’s beautifully playful, ripping off cultural clichés in style. The next moment it’s a heavy handed exercise in forcing as many self aware game references down your throat as possible. When its clever it works, but it often feels like it’s trying too hard to impress. 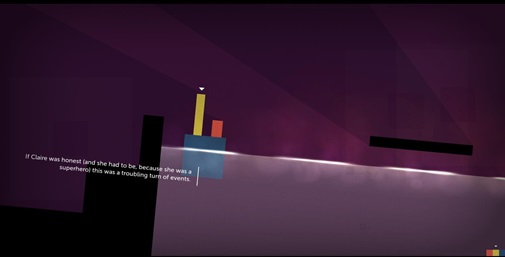 Rather than relying on basic platforming for its entirety, Thomas introduces a variety of different characters that offer differing skill sets. The game adopts a puzzle element that involves you utilising the different characters’ abilities effectively to proceed. Thomas, Chris, Claire, Laura etc. Each block has a different shape, jump height and miscellaneous movement functions that force you to coordinate the progress of all the characters present in a level. The different blocks are all imbued with a surprisingly pleasant amount of characterisation by their powers and the narrative itself. It gives Thomas a unique feel, one that is arguably the game’s strongest element.

As with the writing though, the flashes of level design genius are ruined when the game just tries a bit too hard. One good idea will occur, only to be repeated straight away two or three more times. It’s needless game extending that ruins the magic of that first experience of a good puzzle. A similar reliance on finicky skill jumps and balancing blocks on top of each other also slows the pace of the gameplay down in a way that removes a sense of satisfaction and flow from Thomas’ levels. The problem is furthered by frustrating basic movement. It’s a strange thing to pick up on, but the characters move very slowly when you initially hit the analogue stick, only to accelerate massively a second later. It isn’t especially smooth and it also makes precision platforming quite the chore. 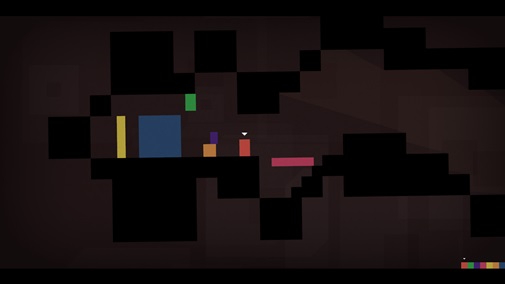 The reliance on repeated puzzles and skill jumps is an obvious attempt to extend a short title. Thomas isn’t long, but that’s fine. I’d happily take an hour or two of totally fresh puzzles over the repetition Thomas utilises. Still, it does extend the experience to a few hours, returning your financial investment in full. The fact that it’s also part of the cross-buy initiative makes the deal even sweeter for Vita owners. The PSN version of Thomas includes additional content that extends the length of the game over its PC equivalent. If you’re won over by the curious charm of Thomas, it’s definitely worth the cash, though I would’ve preferred quality over quantity when it comes to the level design.

I’ve been very critical of Thomas Was Alone so far but, whilst the negatives are ever present, it is hard to deny the game’s originality. There is a huge amount of character in the minimalist design, and the sheer charm of it all is a hugely attractive alternative to the AAA titles that pride graphics over ideas. It’s frustrating then how simple it would have been to round out the rough edges, but Thomas is one of the more courageous games available on the PlayStation Network. Just remember that courage isn’t always free of trouble.

This game was reviewed on PS3.

A cute indie platformer with a bright idea, Thomas Was Alone is at its best when it's offering clever character-based puzzles, and at its very worst when it is repeating them

A copy of this game was provided by developer/publisher for review purposes. Click here to know more about our Reviews Policy.
Tagged With: PS Vita, ps3, PSN, review, Thomas Was Alone