"It's not the best at anything it does, but it is fun."

Tiny Troopers made quite a name for itself when it hit iOS some time ago. Here was a full featured real time strategy game for a mobile platform that just worked, a game that seemed to offer all the depth of one of the most mechanically demanding genres around on the go, and one that was uninhibited by iOS devices’ rather stunted control options.

Emboldened by their success, the folks behind Tiny Troopers decided to take on the big boys. Bringing the game to PC, home of the RTS, might sound ridiculous, especially considering the pedigree of the genre, but somehow, surprisingly, it seems to work, in spite of quite a few minor hiccups along the way.

Tiny Troopers seems ridiculous at first. Looking like a cross between a Nintendo inspired take on gritty, modern warfare – not unlike Advance Wars, actually – and something a lot more grounded like Company of Heroes, the game ends up sending off the wrong message to the PC gamer at first. The bright colors and the chipmunk voices of the units as they attack exude a ‘My first RTS’ aura, which might initially make it difficult to take the game seriously. The overly simplistic mechanics and the highly streamlined controls (that get in the way more than anything else) also add to the idea.

That’s because that’s what Tiny Troopers ultimately is – an extremely simplified strategy game that would probably serve as a nice introduction to the genre for newcomers, and as a brief distraction for jaded veterans. Everything about the game is simplified, so that its mobile heritage isn’t hard to see. For example, you cannot micro manage units. You control the entire mass of them together, at once, directing them with macro commands. 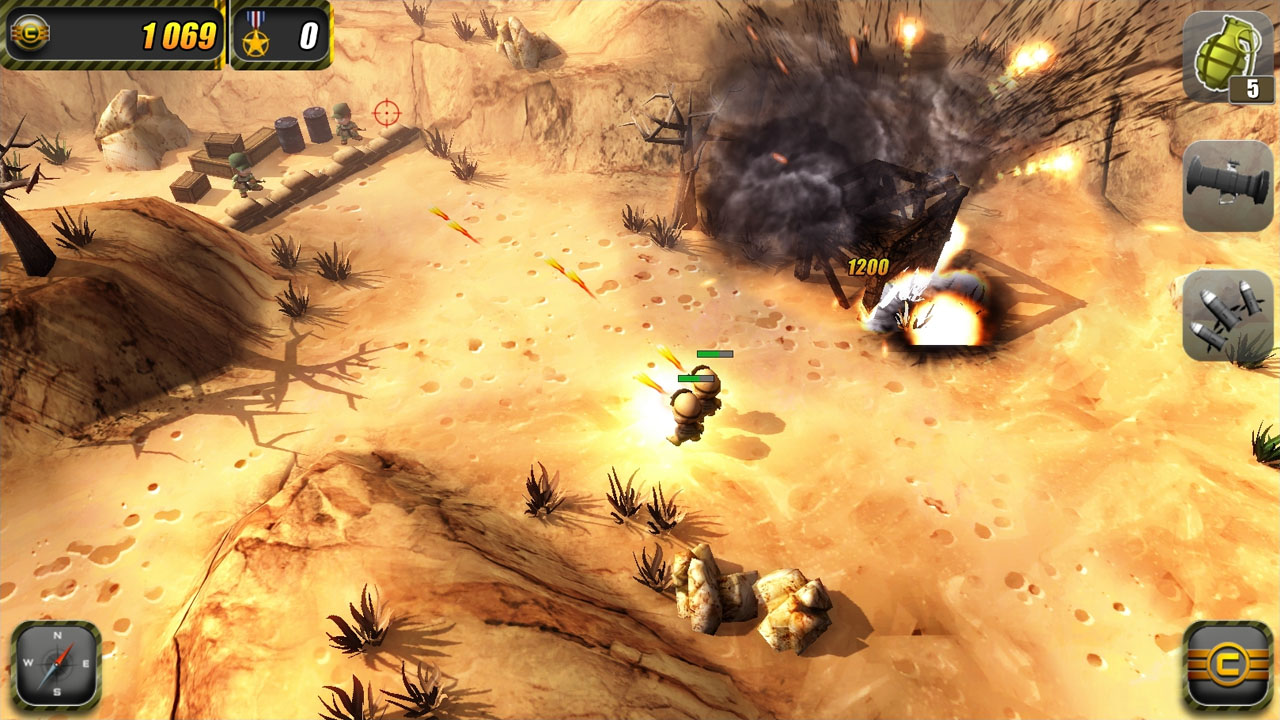 Whereas it works most of the times, especially for the newcomer, or for the kind of RTS player who prefers a brute force, by the numbers strategy, it can get annoying, especially if you’re being attacked from two fronts. You can only deal with the groups of enemies on both sides one at a time, and you have to also fight the controls as well as the enemy.

The controls were perhaps the biggest giveaway to Tiny Trooper’s origins. Featuring a heavily simplified control scheme required you to use your mouse to both move the units across terrain while also use it to aim and fire. This caused frustrations, especially in the middle of hectic combat, and misinterpreted commands were common. Thankfully, a new patch has added in a WASD movement scheme, and it addresses the problem to a very large degree.

What has not been fixed, however, is the camera. The camera angle, zoomed in isometrically, probably makes sense on a small mobile screen, but on the PC, it gets in the way, and you often remain unaware of the presence of enemies until they rain down bullets and shoot you dead. These soldier deaths are probably more painful than they should be.

Why? Because of what is simultaneously Tiny Trooper’s best and most curtailed feature.  Tiny Troopers features unit leveling. After each mission, your units level up, and earn more abilities, but, in vein of older, tougher strategy games like Fire Emblem, the game features permadeath – each time a soldier dies, he is dead for good, and his accumulated powers and abilities are gone.

This wouldn’t be so bad if soldier deaths were down to your skill (or the lack thereof). However, as it stands now, more often than not, the loss of a unit is more down to you wrestling with the controls and the camera, than being an unskilled player, and it just feels cheap when you lose a unit for good through no fault of your own.

Tiny Troopers isn’t the deepest strategy game around. Because of its iOS roots, and concessions that had to be made to that – all of which remain untouched in this PC port – there isn’t a whole lot of variation to the gameplay. Since you can’t control individual units, you are literally just clicking and attacking groups of enemies with the same mass of soldiers. No variation, no tactics, no added strategy through factors like terrain, or character classes. It actually can tend to get quite monotonous. That is probably a problem that the developers foresaw, because Tiny Troopers preemptively attempts to address it in two different ways, one more successful than the other.

The first of these is via its little innovation that it calls Command Points. A bit like Call of Duty’s perks system, as you accumulate kills on the battlefield, you can gain access to temporary skills that boost your fighting abilities, and allow for reinforcements. Concurrently, you can also purchase perks before a battle begins, such as increased armor, higher leveled weapons with better range and damage, specialized medics and other kinds of units, and more. You have a limited number of points, so how you spend them is of the utmost importance. Although theoretically, you can always just get more points on the battlefield for your next mission, it is always a good idea to save some of them up as a buffer, so that you always have enough points to tackle any kind of mission. 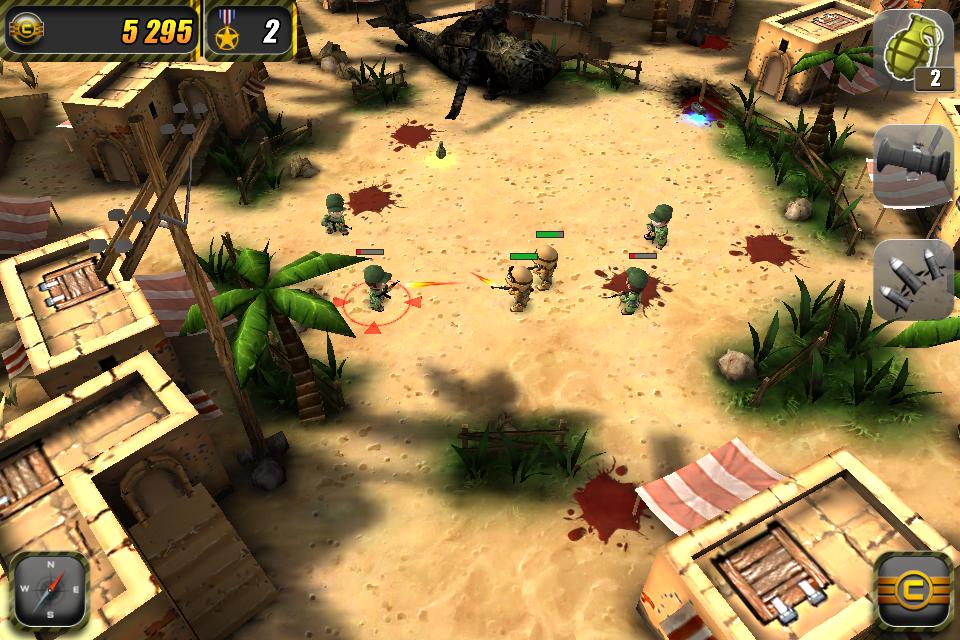 The importance of this mechanic cannot be understated. It single handedly elevates Tiny Troopers from a monotonous overtly simplified RTS with heavily streamlined mechanics and no variation to a game that actually does offer no dearth of strategy, but in a different way. Tiny Troopers may not offer much in way of real time, tactical strategy, but it demands that you use foresight, and that you balance your decisions properly. It actually adds depth and replaybility to the game in that you want to try different techniques to see how it goes. How would it be if you opted for the sheer brute force strategy, and just went all in, spending all your points, and hoping to rack enough of them on the battlefield for your next mission? Or is frugality better served?

It’s good that this mechanic works, because the second way Tiny Troopers tries to add variation falls flat. Being a mission oriented strategy game, Tiny Troopers attempts to mix things up with its mission objectives. Try to keep a band of journalists safe as they cover the story, clear the way to the lair of a tyrannical dictator, actually take down said dictator, disable enemy facilities, and more. And if that sounds like it’s good and varied to you, well it isn’t, because in practice, it all ends up boiling down to the same monotonous point and click and destroy anything that moves strategy. With a singular mass of units.

It isn’t the deepest strategy game around, it isn’t the most fun, it isn’t the best. There is no reason for anyone even slightly familiar with the genre to have more than a fleeting interest in the game. Thankfully, at its current cost, it does make for a good value proposition. That, and the fact that it’s probably the best way to introduce little kids to this kind of a game are what work best in this title’s favor. Just remember, a decision has to be made – do you really want this game on PC, or are you better off with it on your iPhone? Because honestly, the PC does nothing to improve the game whatsoever. It doesn’t hinder it either, but the game is probably better enjoyed in bite sized bursts on iOS devices than it is with a keyboard and mouse.

Some interesting, new, compelling mechanics that add strategic depth to the game, such as unit leveling and Command Points; streamlined and accessible, so that it can be used as a great gateway introduction to RTS games in general for younger players

The game betrays its mobile roots, especially in its curtailed control scheme, and in its rather limited options on field, which severely hamper strategic depth; the sound effects can be annoying; the camera can get awful; mission variety is lacking; the gameplay boils down to the same monotonous routine of point and click

Final Verdict:
FAIR
It's not the best at anything it does, but it is fun, and is probably best used as an introduction to RTS games for younger players and newcomers to the genre
A copy of this game was provided by Developer/Publisher/Distributor/PR Agency for review purposes. Click here to know more about our Reviews Policy.