Tom Clancy’s Rainbow Six: Siege Wiki – Everything you need to know about the game

Everything you need to know about Tom Clancy's Rainbow Six: Siege.

Tom Clancy’s Rainbow Six: Siege is an upcoming first person shooter mixed with tactical first person shooter mechanics set in the Tom Clancy universe of video games that is currently in development by Ubisoft Montreal, they have previously worked on other Tom Clancy games like the massively popular stealth franchise, Splinter Cell and the modern warfare inspired Ghost Recon games.

Running on the internally developed Anvil video game engine (amplified by Realblast Destruction), Tom Clancy’s Rainbow Six: Siege will be launching on the Xbox One, PlayStation 4 and Microsoft Windows and is slated to be released at some time in 2015. The game will be available at retail and via digital download, the Microsoft Windows of the game will most likely require activation via Uplay.

Tom Clancy’s Rainbow Six: Siege is a first person shooter video game that takes the expected mechanics of the previous Rainbow Six games and refines them and improves upon them to bring a new gameplay experience to the player. To that end, Ubisoft Montreal is using their internally developed Anvil engine that is being bolstered by the Realblast Destruction engine.

This combination of video game engines allows the game world to suffer considerable damage and thus change how player will be forced to interact with each other. In the games announcement gameplay trailer we see a player shoot out a portion of drywall to clear a line of sight for their team mate situated across the street with a sniper rifle.

Seemingly taking a note from the Battlefield franchise, Tom Clancy’s Rainbow Six: Siege has a focus on destruction, with a Ubiblog post saying “The attackers vs defenders idea can be boiled down to destruction vs fortification. While the defenders are reinforcing walls and floors and laying down traps, the attackers will be scouting ahead and using teamwork to blast these best-laid plans to hell.”

The post goes on to further emphasise the importance of destruction mechanics in the game, stressing that they aren’t merely an aesthetic touch, but a pivotal part of the overall gameplay experience. An excerpt reads, “Destruction is at the center of our experience and it certainly brings brand new tactical advantages to the franchise,” Witts explains. “No longer are players confined to breaching doors and windows to get the drop on enemies. Observe weak points in enemy defenses and breach through walls and floors to exploit them. The Realblast destruction engine is at the center of the Siege gameplay experience and enhances the tactical play that Rainbow fans know and love.”

Tom Clancy’s Rainbow Six: Siege is actually a replacement game. Originally, Ubisoft was developing a tactical shooter in the Rainbow Six canon that was to be called Rainbow Six Patriots and featured many of the classic Rainbow Six manoeuvres such as inverted rappelling and team breaching. The game was a considerable way into its development with images, screenshots and magazine coverage having come out.

But despite this, the game was scrapped and Tom Clancy’s Rainbow Six: Siege took its place. It was announced that the title was scrapped because it didn’t feel “next-gen” enough, but elaborating on this in a Ubiblog post, we’ve been told the following, “And now the question we know a lot of you are asking: What happened to Rainbow Six Patriots, the game we showed off a few years ago at E3? The short answer: It just didn’t cut it for the new generation. When the new hardware was announced, the decision was made to reboot Rainbow Six with a new team at the helm and a new goal of taking full advantage of what the next generation had to offer. The focus on siege and destruction technology this group envisioned was incompatible with the direction Patriots had taken and the project was ultimately cancelled, making way for something even bigger and better.”

Thus far, it’s unknown whether or not the game will have a narrative structure in the traditional sense. 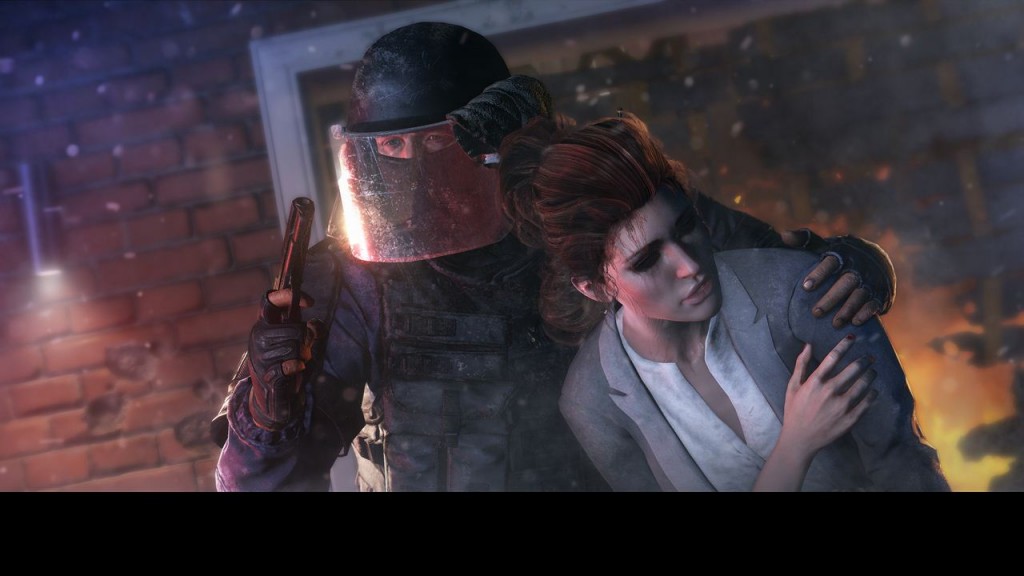 The game has a heavy multiplayer focus that forces players into a competitive situation that (thus far) includes a team death match styled hostage rescue scenario that see’s the Rainbow Team invade a locale that is being defended by the opposing force.

The Rainbow Team was shown to breach the home of a hostage from the roof after arriving via helicopter drop. They then proceed to rappel and breach the windows (as is the series iconic incursion tactic) before collectively dispatching an opponent with concentrated fire. From here on we can see the players deploying bulletproof riot shields for mobile cover (at the cost of a two handed weapon being replaced by a pistol) whereas the opposing players barricade doors and block of hallways to deny access to the Rainbow Team.

Players can now also strategically breach according to their own plan, this includes a vertical breach that allows a hole to be blown in the floor, allowing ingress into the room beneath. This was mostly likely inspired by the vertical breach performed by Sam Fisher in Splinter Cell Blacklist (private estate mission), which was another Ubisoft Montreal developed game.

Rainbow Six doesn’t normally use the traditional class system, players instead create a custom load out allowing them to fulfil a specific role within in the team that they’re operating with. Thus far, we are yet to see any class based system, though it is unlikely one will emerge.