Top 7 Mario Games of All Time

Mario equals gaming. This much is clear at this point. A pop cultural phenomenon, Nintendo’s mustachioed portly plumber has starred to date in over two hundred games.  Throughout the world, Mario, along with his taller, greener brother, is recognized almost instantly, as are some other elements from the games that he stars in, including his power up mushrooms, the star power up, Bowser, Princess Peach, and of course, the games’ excellent, excellent music.

This incredible popularity is backed by some games of some serious substance. The classic 2D sidescrolling Mario games are all recognized as among the most influential games ever created, and are generally credited with reviving and creating the gaming industry as we know it today. The 3D Mario games have been known to shift paradigms and to lead the way forward through sheer innovation and ingenuity, whether it be Mario 64, which was the first game to demonstrate how 3D movement and camera control should be handled, or the more recent Super Mario Galaxy, which absolutely defied the traditional laws of perspective in video games, and gave some real meaning to the term ‘three dimensional movement.’ Mario is deservedly called the mascot of gaming- this is because he has pretty much been at the forefront of every single stride or advance that gaming has ever made.

And this is what leads to his massive, enduring popularity- put together, the mainline Mario games have sold over 260 million copies, a gargantuan number by any yardstick.  While other gaming mascots have come and gone, Mario has survived and thrived. This is because, as enumerated above, he continually reinvents himself. Now nearing his 26th birthday, he shows no sign of stopping at all, with the upcoming Super Mario 3D Land sure to be one of the most influential handheld games ever created.

In this list, we look at some of the best games in the mainline Mario series and attempt to rank them. So, whereas we’d love to see Mario Kart or Super Mario RPG or Mario Golf on here, we can’t include them because they aren’t a part of the core platforming series. With that in mind, let’s have a look at the seven best Mario games ever, in ranked order. 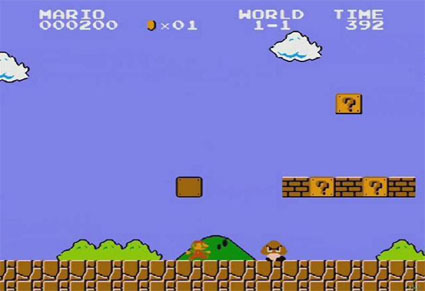 It feels unfair to list Super Mario Bros so low on this list, if only because of its sheer importance and monumental impact at the time of its release. The game that singlehandedly revived the American console industry after the Crash of 1983, and one that really added some meaning to gaming beyond just trying to achieve a high score by having a semblance of purpose or direction for its titular protagonist, there were so many things that this Mario game can be credited with- the first proper platformer in the modern sense of the word. The first game to include permanent power ups. One of the first games to popularize the concept of speedrunning. The first game that demonstrated a modern control scheme for console games, that is in fact still used in its essentials today.

Apart from its contributions, the game still manages to hold its own today against modern titles, in spite of the twenty six year interregnum that separates it from modern games. It has tight platforming, and great (albeit generic- which, to be fair is expected as this was the game that laid the blueprint for generic) level design, pitch perfect controls, and some great music to go with it. In fact, you probably cannot go to any part of the world where the music that plays in World 1-1 is not recognized.

If we were to rank these games solely on the basis of their impact and importance at the time of their release (and probably since then as well), this game would top the list, no questions asked. However, as it stands, we are looking and assessing all these games as, well, games as well. And while Super Mario Bros. is certainly a classic, it was outdone by every single game in the series that followed it. Yet, its importance and prestige, along with the fact that it aged so well, have all ensured that it does find a place on this list, ahead of many other games. In more ways than one, New Super Mario Bros. Wii was a divisive game. While everybody appreciated the devilish challenge that it posed, along with its demanding platforming, and some neat level designs, people felt that, barring its four player local multiplayer mode, the game was too conservative, and that it did not reflect the eighteen year period that separated it from the last mainline sidescrolling Mario game, that it played too close to the originals, and that in many ways, it felt dated. Complaints were made about its mechanics, the levels themselves, regardless of the design, were deemed to be right out of the book, with your typical desert level, and ice level, and so on…

Then there was the fact that the multiplayer mode itself became the focus of some criticism. While there was nothing wrong with the mode itself- and some of the best fun to be had this generation is when you play NSMB Wii with your pals- in this day and age, people expect an online mode as well, and they were appalled at its exclusion, in spite of Nintendo’s repeated assertions that its inclusion would be missing the point, that the game was about having fun and having a laugh with the people you knew best. Moreover, the game’s name, which recalled a DS game that had more or less the same name (just without the ‘Wii’ suffix), the graphics, which were also conservative, the soundtrack, which was deemed to be falling short of series standards, and the fact that many people simply believed it to be a port, all led to the game getting a bit of a bad rep with core series enthusiasts.

Which is all bullshit. The game shone at its heart, with its perfect level design, and the time and tested platforming which had made Mario so enduring in the first place. The game was devilishly hard, and yet it was never unfair, it was taxing and demanding to the ultimate degree, and yet it was always fun, and it was that rare game that could actually accommodate extra players without compromising on any of its fundamentals. For all the things that it purportedly did wrong, there were many more that it got absolutely right. Since it got those right that make Mario Mario, I suppose there is no point in criticizing the game. All such criticism is fully unjustified. 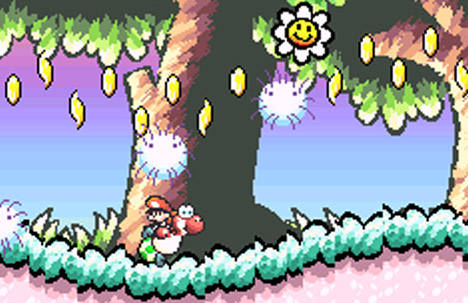 Yoshi’s Island is a gem of a game. With eye poppingly great graphics that are yet to be outdone even today, a decade and a half after its release, excellent platforming and level design, the introduction of some great mechanics, especially for the titular dinosaur, and its unusual premise and structure that really broke the mold as far as series conventions are concerned, the game stands out in many player’s minds as one of the finest games ever created, and in their hearts as being representative of some of the fondest memories they have.

In order to keep this list from getting repetitive, I shall refrain from praising the game’s mechanics or controls or level design, since, let’s face it, those things are a given for any Mario game (even the more horrible ones, like Super Mario Sunshine). Instead, let’s focus on the lovely, crayon coloring book style graphics for this game. Or it’s wonderful, lullaby resembling music. Or just the sheer adorability of its titular mascot, the green dinosaur Yoshi. There are actually so many things to consider when we discuss this game, even if we don’t assess it as a Mario game.

Yoshi’s Island was a wonderful game. A lovely experience, that anyone with a soul and half a heart should enjoy. It’s like one of those things that instantly resonates with us, and connects us to our (often forgotten) childhood in a span of a few minutes. If you remain unmoved after playing Yoshi’s Island, then there is clearly something that is wrong with you. That is how great this game is.