Total War and Warhammer are both highly regarded in their own spaces as strategy video games and deep tabletop games, and as it turns out, they also go great together. The scale and historical know how of the Total War series is very much the Peanut Butter to Warhammer’s epic lore Chocolate and Total War: Warhammer II runs with the strengths of both.

With that said, it is a really tall order to take it all in. Both series are known for their complexity, Total War for its deep strategic gameplay and engine, and Warhammer for multiple volumes of lore. The four factions of the game are split between eight different leaders and all of them take on the massive campaign with different starting positions, motivations and upgrades to pursue.

"The distinct ways these armies approach battle, and the variations that different leaders will bring to even the same race, raises the game above almost any other strategy game already, and then layer upon layer is still added"

The traditional high elves might stand shoulder to shoulder in tidy rows as they overtake the enemy 300 style, blocking out the sun with their arrows as the cavalry hides to the side waiting for the moment to take the enemy flank. The Lizardmen march menacingly towards the front lines with towering mastodon war machines holding the rear, Meanwhile the rat-like Skaven scurry across the field of battle in massive, Zerg-rush like numbers, fodder to distract while the massive, expensive war machines do the majority of the work.

The distinct ways these armies approach battle, and the variations that different leaders will bring to even the same race, raises the game above almost any other strategy game already, and then layer upon layer is still added such as encamping enemy cities, climbing the tech trees, equipping magical items to your lord, attracting followers, recruiting heroes, missions… it’s all quite a lot to take in at once, and though the real time action can be paused mid battle to gather your bearings, it’s how encyclopaedically demanding it is on the player.

A hundred hours of play time is only scratching the surface of this game, and that’s good or bad depending on who you are. Fatigue was quick to set in for me, and playing while constantly needing to reference the in game help or alt+tab to a wiki got old quick, since I didn’t have the time to reflect on things at a slower pace. Missions and mini-goals keep your attention on the wider scale of the conflict and what’s going on in the world, but the ultimate goal, regardless of which faction you’re commanding, is to do something with this massive magical portal at the centre of the map. 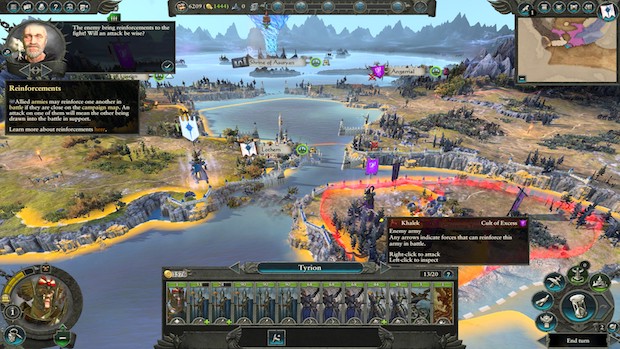 "Flipping the endgame win condition on its head does bring a fresh perspective to a genre that usually relies on shows of force being an easy way to succeed. "

The game doesn’t care so much about how much territory you control but about how many in a series of rituals you complete to take control over the great vortex. The journey on the way there might be a long road and involve many skirmishes and diplomacy, including Tolkien-esque siege battles that use the massive scale of the game to great effect, but once you close in on the final ritual, it becomes a game of defence and surviving long enough to reach that final goal. Flipping the endgame win condition on its head does bring a fresh perspective to a genre that usually relies on shows of force being an easy way to succeed.

With the scale of the game, however, comes an epic pace. The action isn’t always pulse pounding whiled huge heavily armoured units clash over and over or you’re stalling out a city into starvation. Menus are obtuse and hide almost all information two pages down and the immediate effects of what you do aren’t always obvious.

You have an advisor to help keep you pointed towards your immediate goals in the opening hours, who can be turned off and on at will, but the game flits between tutorials so quickly it never gives you a chance to really learn. The huge size of the game world might mean you never even see specific races until very late game, and you go out of your way to cross the huge oceans. It’s intimidating, but helps keep the game fresh as you and the rest of the world push out in different, interesting ways and new situations erupt. 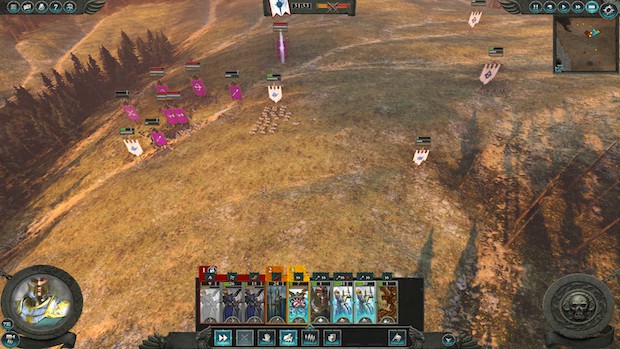 "it’s hard to look at Total War: Warhammer 2 and not be impressed by the depth they’ve stacked into the strategy gameplay, to create a game where the epic battles are befitting of the massive Warhammer lore"

What I couldn’t conquer in with all the armies in the world however was the performance of the game tanking on a machine that can otherwise chew up far more frantic and detailed games. Framerates were extremely jittery and sometimes tanked well into the single digits, even after dropping the resolution. Perhaps I could understand that it was rendering an awful lot of units at once, though once zoomed in they don’t stand up to close scrutiny. The model detail is hardly a mark on a game meant to be viewed from super high up, but the game doesn’t feel quite ready for primetime because of it, and the chugging frequently pulled me out of the experience.

Other aspects of the presentation hardly fair better, with the kind of sweeping, generic battle OST that’s going to be in one ear and forgotten as soon as the battle is over. Audio design is lacking in general, and sound effects never felt as crunchy as two massive armies clashing feel like they should have sounded. The game should be thankful there’s such a great variety to the strategy, because there isn’t much else to hold you here.

Putting aside the technical bumps, it’s hard to look at Total War: Warhammer 2 and not be impressed by the depth they’ve stacked into the strategy gameplay, to create a game where the epic battles are befitting of the massive Warhammer lore. The end game twist flipping the idea of a strategy game on it’s head is a fantastic subversion on a solid foundation. Total War: Warhammer II is a game that will demand your full time and attention just to learn the basics, but the game is sure to reward that investment ten fold back.

So many layers to the strategy to reward dedicated players that they’ll find hundreds of hours of content to enjoy, and a subversive twist on the endgame turns the “kill everything” solution on its head.

Total War: Warhammer II is a fantastic strategy game that shows a deep understanding and even control of the best elements of the genre, but the game demands that same level of dedication from you to get the most out of it. I can’t recommend this game as a place to start, but I can wholeheartedly say to veterans and strategy faithful that you’ll have a lot to dive in to.

A copy of this game was provided by developer/publisher for review purposes. Click here to know more about our Reviews Policy.
Tagged With: pc, Sega, The Creative Assembly, Total War: Warhammer II