Tecmo Koei might be most famous, or perhaps infamous for their Warriors series of games, but as I’ve learned first hand, there’s a wider set of skills they can exhibit when they want to. While usually remaining firmly rooted within Japanese culture as their bread and butter, one of the standouts was Toukiden. When I last looked at the series with Toukiden Kiwami, it was pretty obvious that the series was taking more than a passing inspiration from the Monster Hunter series. Luckily, Toukiden 2 stands better on its own.

The meat of what Toukiden Kiwami brought to the table is still very much at the core of this sequel, while dropping some of the baggage. Slayers who used to fight for humanity from the shadows now stand brazenly and openly in defiance of a massive Oni invasion called the Awakening, and during the first major battle to defend humanity the player is flung through time and space to a far away village ten years in the future. A plot contrivance to reset carried over files from the last game? Sure is. But much like most games from this studio, you only need to carry as much interest in the plot as you want. You can freely ignore it because the part that matters is the slaying. 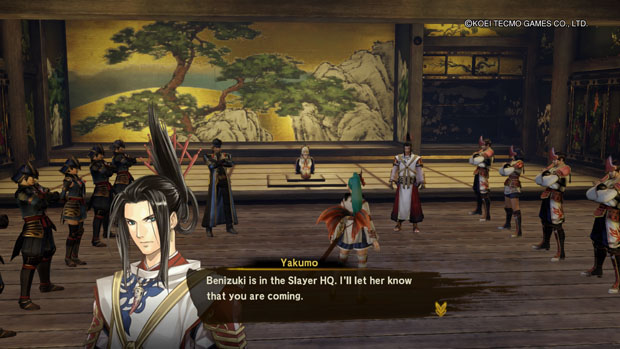 "Missions no longer take place in segmented areas you teleport to and from. Rather you’ll gather your party of fighters and then seamlessly move into an open world to explore."

The spirit of collection and upgrading still exists within Toukiden 2, but your monster Oni hunting carries with it a constant feedback loop of getting new gear to grow in power, so you can fight stronger enemies to develop even stronger gear. Fighting earns equippable Mitama which help tailor your playstyle and keep the repeat of the feedback loop from getting repetitive. At the core, Toukiden 2 still has much in common with a certain famous Capcom series at a basic level- it’s how you’re doing it now that makes this feel like its own beast.

Structure is where Toukiden 2 begins to differentiate itself. You still have a choice of several different weapon classes to help flesh out the details of your play style, and can freely experiment, but missions no longer take place in segmented areas you teleport to and from. Rather you’ll gather your party of fighters and then seamlessly move into an open world to explore. Sub-missions and random battles can now be found in the world, giving it more of a living, breathing nature and while there is less diversity than the sectioned off areas offered before, I appreciated the near elimination of the transitions and accompanying loading times. Fast travel does exist to cut out the fat as well, keeping huge hikes at bay.

Many areas are at first choked in the poison Miasma of the Oni and need to be liberated, but you can only handle so much exposure at once. The time limit isn’t so strict as to be stifling, and it’s only in specific areas, helping it not feel overbearing or cheap and instead encouraging the player to take a measured approach to exploration and double back to improve their equipment if the going gets rough. 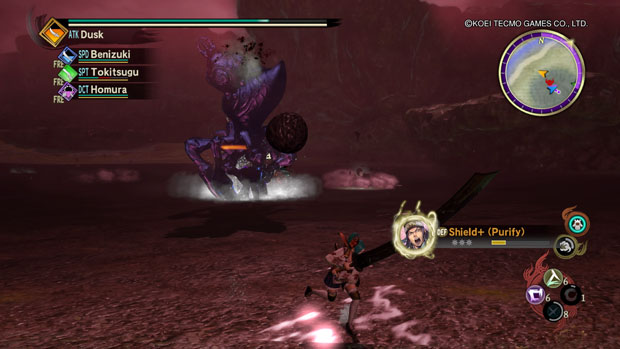 "In addition to your main Mitama, you can now define one to an Evasion skill and an attack still, providing triggerable buffs that allow you to further build on your play style"

Mitama still play a large role within the players load out. These souls of dead warriors still control your on field selection of powers and can be defined as different classes like power, speed or defence. In addition to your main Mitama, you can now define one to an Evasion skill and an attack still, providing triggerable buffs that allow you to further build on your play style and giving you that much more of a reason to swap around different Mitama frequently as you obtain them. It’s a small change that elevates so much.

Combat in general feels far more kinetic than before. Where as Kiwami kept things fairly tame with how combat flowed, Toukiden 2 introduces the Demon Hand and weaves it into many of the things you do on the battlefield. Somewhat like a telekinetic tether, the demon hand can grapple an enemy and launch you toward it for an attack. In the case of the larger Oni, you can use it to leap up towards weak points or just to get out of range. With the proper co-ordination between human team members, one can hold back a body part while the rest of the team takes full advantage of the opening. Adding that touch of ridiculous that makes the other games Tecmo does so fun helps make Toukiden 2 feel less Monster Hunter and more like its own thing.

Still having the Playstation Vita taken into account, Toukiden 2 doesn’t exactly look like the powerhouse visually that it otherwise could have. There are better details in the environments textures, and nicer animations than Kiwami offered while still having roots as a PSP game. Effects are minimal and there isn’t much else to say besides they do the job and aren’t going to do much to impress anybody. The audio design meshes with the animations nicely to give the act of combat a weight and amazing crunch, but the music is gone from your head no sooner than the game is turned off, leaning on the same “Feudal Japan” music you’ve heard many times. 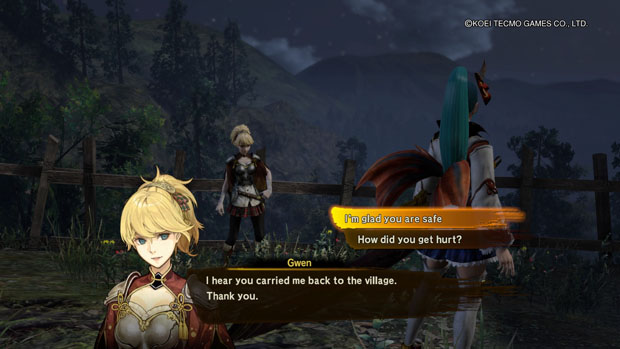 "The audio design meshes with the animations nicely to give the act of combat a weight and amazing crunch,"

Additionally, controls on the home console still feel like they were carried right over from the limitations of the Playstation Vita, ultimately making things feel cramped in strange ways they really shouldn’t. It’s unfortunate that Toukiden 2 didn’t offer some more customizable controls to allow spacing out, and on occasion I tripped up during combat encounters not because I wasn’t skilled enough to execute, but because the game failed to notice I was holding the trigger to modify that attack into a use of a power.

Toukiden 2 does a lot of great things to separate itself from the shadow of Monster Hunter, and playing to the strengths of the developer has done a lot to turn Toukiden into a far more open, creative and kinetic game, while not betraying what people loved about it in the first place. While still clearly tied to handheld limitations, which results in a few frustrations, the overall package of Toukiden 2 forges its own path and anyone interested will love jumping back into the life of a slayer once again.

This game was reviewed on the PlayStation 4

The open world structure, alterations to the Mitama system and Demon Hand all create a far more kinetic play than the previous game, as such breaking away from feeling like a Monster Hunter clone.

Presentation and controls are held back by the Vita release, with no concessions or changes for the stronger, more versatile platforms.

Final Verdict:
GREAT
Toukiden 2 takes a core from Kiwami and makes some subtle changes that develop the whole thing from Monster Hunter clone to something unique in the genre. The new, faster combat is a ton of fun and while cramped controls and limited presentation are there and a bother, they aren’t the end of the world and don’t frequently get in the way of the fun.
A copy of this game was provided by Developer/Publisher/Distributor/PR Agency for review purposes. Click here to know more about our Reviews Policy.