“Why waggle!? Why must you destroy so many decent titles with your ineffective control methods?! WHY?!!!” It was after shouting this that I had to swiftly correct myself, realising that the game in question was by no means a “decent title.” This game was Tournament of Legends, a one on one fighting game based around Graeco-Roman mythology with a sprinkling of Norse history for good measure. You pick your character from the likes of Medusa, the Valkyrie, A generic Roman warrior etc. and do battle with a similar combatant by shaking your Wii remote around until your arms start to hurt. That description is probably too forgiving, as it makes the game seem like it was actually planned. Tournament of Legends is one of these games that seems so imprecise, so wishy washy and so plain uninspired that it almost seems like it just fell out of the developers pocket one day, rather than being a title anyone actually put any effort into.

Nothing exemplifies this mediocre display of game design better than the controls. Have you ever tried driving a car with no arms and with butter in your eyes? The amount of control you’d get over that car in our metaphorical situation is comparable to the control you have over your fighter in ToL. The controls feel spongy, and at their core are just badly designed. After years of playing Wii and DS games, it now seems obvious to me that key actions and commands should not be shoe-horned onto the Wii remote sensors or touch screen. I don’t want to wave my arms around like a ninny every time I want to attack. If it was some kind of super attack or special move you only did now and then, that would be fine. But no, every time you want to make a basic strike you’ve got to shake it. It just feels so wrong… Developers: get it through your heads! For years we have been happy pressing A to attack. Don’t try to be too clever about it. Just stick with what works. 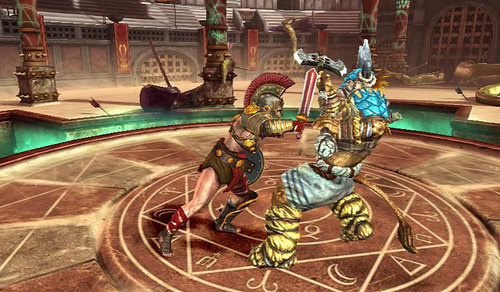 Now it’s time to follow up that attack by wiggling the remote around like a spaz. Sigh…

Right, that’s that particular rant out of the way. The rest of the control scheme isn’t that bad by comparison. You have your dodge button, a block button, a button for throwing projectiles and when pressing the A button in conjunction with a direction you perform one of four special moves based on your character and equipped weapon. It’s a nice touch having so many skills that change based on equipment, but they all revolve around the same “do some damage” kind of affair. It would have been better if some skills had alternate properties such as inflicting status effects, opening up combo opportunities etc. The lack of variety is also apparent in that all the characters handle in virtually the same way aside from movement speed. The core mechanics work fine enough when you get over the waggle atrocity, but it’s exceptionally repetitive and just seems a little wrong somehow. I don’t know if it’s the imprecise controls or the dodgy animations, but the game seems like a guy walking with a full sack of potatoes for shoes: Sure he’ll get from A to B, but it just seems sort of odd.

The game does try to add a few ideas to the table, to prevent it being too much of a mindless button-mashing, waggle-fest. A match consists of three rounds and when one character is knocked out, both players have the chance to regain health by shaking the Wii remote and nunchuck in a specific direction. Additionally some similar quick time events accompany certain special moves and even arenas. The arena QTEs really gave each level its own feel, so in the lair of the Kraken, sometimes the Kraken will try and swipe you off the stage and each competitor has to dodge. It goes a log way to making the levels feel distinct, and not just a blatant re-skin of the same arena. The QTEs certainly try to mix up the usual formula, but the inaccurate controls cause a lot of frustrating misses that really get on the nerves.

It was nice to see High Voltage software trying to keep the gameplay fresh, so I really can’t understand why so little effort was put into making enough game modes to hold interest throughout the proceedings. You get a practice mode (which is frustratingly lacking in bot customization) with a really poorly explained tutorial, and then a story mode with an equally poorly explained story. I say story, but that’s a bit on the generous side. Aside from that we have the obligatory split-screen versus mode. I would complain about the lack of any online modes, but this is the Wii we’re talking about here. That’s it. Really that’s all. No survival mode, no challenges, no score or time attacks. It really just seems a bit half-baked and typifies the lack of time that clearly went into designing this game. 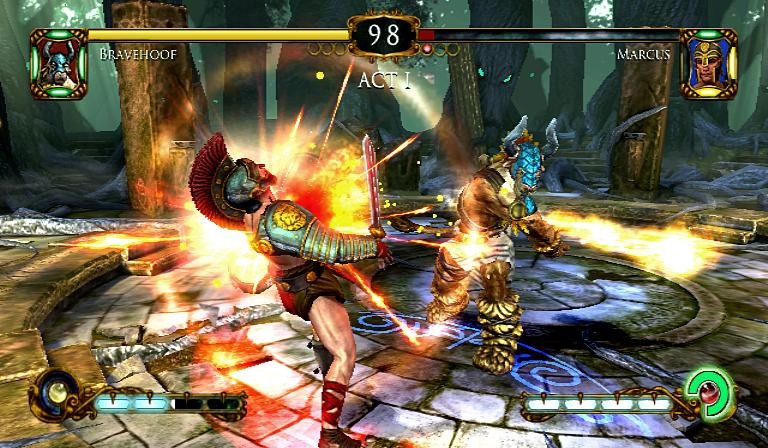 If this doesn’t look suspicious enough, just wait until you see the game in motion…

“Why Nintendo!? Why must you destroy so many decent titles with your graphically inept console?! WHY?!!!” This time I don’t need to stop and correct myself as I have officially given up on the Wii producing visuals of any quality. That said, it’s not really Nintendo’s fault here. The real culprits in this mystery are the designers themselves. They certainly deserve a hefty sentence for various crimes against the senses, including but not limited too: Poor textures, dodgy lighting effects and horrible animations. The visuals are a technical embarrassment, but are almost saved by some unique character and stage designs that don’t entirely rip off Clash of the Titans.

“Why audio director at High Voltage Software!? Why must you further destroy your already rubbish game by letting your eight your old sister record the voice overs?! WHY?!!!” (I wonder if my outbursts are starting to become a little too predictable?) The horrendous voice acting throughout this game culminates in a handful of satanic clips for each character that are repeated over and over. Think Chinese drip torture, but under a waterfall rather than a bucket with a hole in it. Add to this the generic background music and amateurish SFX and we are left with one question and one question only. How the hell did the sound guys on this game get paid?

Next we come to the lifespan of the game. Lifespan? What Lifespan? Tournament of Legends practically defecates on the idea of longevity offering repetitive combat, identical move sets for each character and an embarrassingly limited collection of dull game modes. This game is available at a budget price for a very good reason. Do not be fooled dear reader. 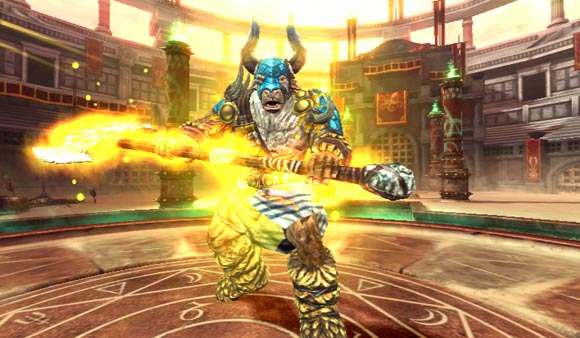 Some of the individual character designs are decent enough. It’s just a shame all the characters play the same.

Most games start with an idea that is then built up with the help of a dedicated team of developers, a good few years, and a large helping of cash. Tournament of Legends just seems so rushed and “meh” that it almost seems like none of these were part of the equation. It almost seems like one of the developers just found the source code in the toilet bowl after one of his daily bowel evacuations. It would certainly explain the quality of the game. ToL is little more than a cash grab, designed to try and make as much money as possible from as little thought and effort as the developers can get away with.

Some imaginative character designs, Multiple weapons and special abilities, Levels are all distinct and offer variety

Final Verdict:
POOR
Tournament of Legends attempts to mix Greek, Roman and Norse mythology with a tactical 3D fighting engine, but falls foul of almost every transgression and cliché within the fighting game genre
A copy of this game was provided by Developer/Publisher/Distributor/PR Agency for review purposes. Click here to know more about our Reviews Policy.