It has almost reached the point now where I count film tie-ins as a completely separate genre within video games. A genre that is almost unanimously disliked. The sheer trash that is thrown our way disguised in super hero clothing and the like, ruins all expectation for any game of a film ever. This wasn’t the case with Toy Story 3 however, as anyone who remembers the Toy Story 2 game on PS1 and N64 will recall how surprisingly good it was. Toy Story 3 almost lives up to this title, offering a fun and fairly simple 3D platformer that is sadly marred by a few poor design choices.

There are two main modes of play that the game is composed of, a story mode and the toy box mode, both being based around the same 3D platformer engine and mechanics. The core gameplay handles reasonably well as a platformer, but occasionaly brings in third person shooter elements that don’t feel quite as robust. The controls hit the nail on the head by and large, but a few poor collision detection issues prevent the engine from realising its full potential. Even though a few ledges will not be grabbed for some mysterious reason, the main gameplay is fairly enjoyable. The problem comes in the fact that a “solid third person adventure” is all it ever amounts to. Toy Story 3 has a fun platform dynamic but there is nothing really special about it to hold your attention apart from the licensing.

The story mode, unsurprisingly, follows the basic plot of the movie. Whilst the level design is pleasant and quite varied, there are a few stages with abstract concepts that just seem a bit out of place. The idea is that they are meant to be set in the minds of the kids who are playing with the toys, so Woody is actually in the wild west rounding up the bandits and that sort of thing. Unfortunately this is quite poorly explained (apart from one fantastic meta-game where you take part in a licensed Buzz Lightyear game) and without seeing the film first, you will likely be left bewildered and confused. Seeing as how part of the charm of the franchise is seeing the toys come to life in a realistic setting, the abstract fantasy levels seemed to miss the point and not have the same charm as the levels grounded in reality. 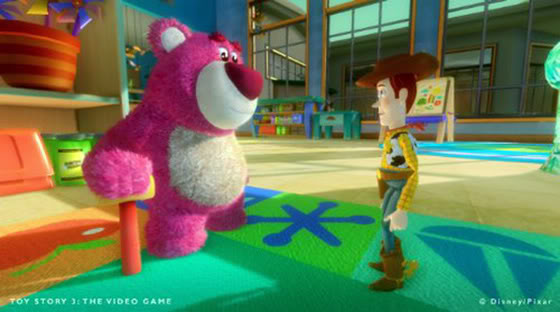 The story mode follows the plot of the film… loosely

Some of the puzzles you encounter throughout the story can be quite enjoyable, taking advantage of each of the controllable character’s unique abilities. You play as Woody, Jessie and Buzz at the same time and swap between the three on the fly. Woody can use his pull string to reach otherwise inaccessible areas, Jessie can balance on thin ledges and walkways and Buzz has the brute strength to lift and throw heavy objects. You often have to use all three characters in conjunction to clear the game’s later challenges and this was one of the most satisfying aspects of the experience. It’s odd then that it seemed woefully under-used in favour of more generic run and gun and straight up platforming segments.

Along with the three player characters, fans of the franchise will find many of their other favourites appearing along the way, from Rex to Slinky, all the way to Ham and the Army Men. It’s just a shame that both Mr. and Mrs. Potato Head are strangely absent. I’m assuming there were licensing issues with Hasbro, (or whatever conglomerate owns the potato head brand) but it’s still a real shame that the whole cast could not be in the game.

The Toy Story films have always trod a careful line of appealing to both kids and adults, and it must be said that the game does quite a good job of this as well. Considering Toy Story is usually considered to be a kids franchise, I was expecting the game to be a push over. The game in fact proved to offer a fair challenge and included some of the more fiendish platforming sections I’ve had the pleasure of attempting in recent months. Sure there were some incredibly frustrating bits, but that sort of comes with the territory of the platforming genre so I’m willing to forgive. It also helps that the hint system in the game is well implemented and doesn’t feel too patronising. Upon hitting a hurdle of some kind the game will prompt you with the help button after a certain amount of time and you can either ignore it, get a clue, or just get the game to tell you what to do if you’re really stuck. My only real criticism with the challenge the game presents is the inability to quit and take a break mid-level. Some of the levels can take a good 45 minutes to clear and it was frustrating to find that if I quit out to get a cup of tea my hard work would go to waste.

Once you’ve made your way through the relatively short offerings of the story mode, you still have the delights of the toy box to sample. In this rather bizarre take on the open world formula you take control of Buzz, Woody or Jessie and become sheriff of a wild west toy town. This involves all manner of tasks from kitting out the townsfolk with new apparel, painting the town’s buildings, getting paid for helping out the citizens and even buying more toys for the box with your hard earned cash. The mode is surprisingly expansive and could easily warrant a separate game in its own right! What caught me most by surprise is how, after buying new townsfolk and areas in the toy box, even more missions and locations start to open up. From Andy’s house to a Zurg themed mission, the levels all add a new dimension to the toy box mode and can take some time getting through as well. This mode is truly what will rack up the play time in Toy Story 3 but it can feel a little on the soulless side on account of some the challenges being a bit too paint by numbers. 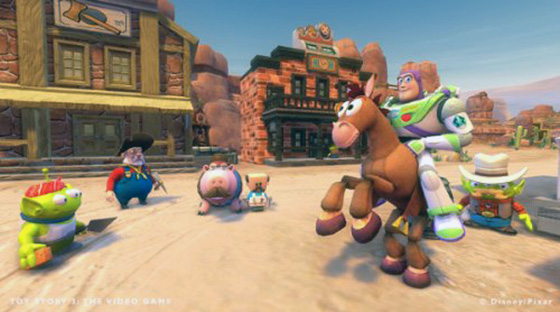 You get to see (most of) your favourite Toy Story characters

Seeing as how the Toy Story movies have always had some mighty impressive animation, it would be quite a disaster if the game didn’t follow suit. It’s good then that the game sports some pretty decent graphics from a technical stand point. Textures are vibrant and full of life and the various materials the toys are made from, whether it be fur or plastic, are well rendered making sure the visuals are reminiscent of the films. The only thing that broke the illusion of “playing the movie” was some of the facial animations for the main characters. They weren’t necessarily bad, but they certainly weren’t in keeping with the rest of the game’s visuals.

The aural side of the game’s presentation retains a similar respect for the source material. Right from the title screen we’re treated to the Randy Newman classic that has always been associated with Toy Story, and I must say that the rest of the game’s soundtrack does an excellent job of imitating the style of the incidental music heard in the films. The voice acting too is of an excellent standard comprising almost all of the original cast. Where replacements have been made to the voice acting it’s certainly been a very good replica and is hard to notice. The sound effects however are comparatively mediocre, and apart from a few classic Buzz Lightyear laser SFX clips, I found myself feeling somewhat underwhelmed for the duration. 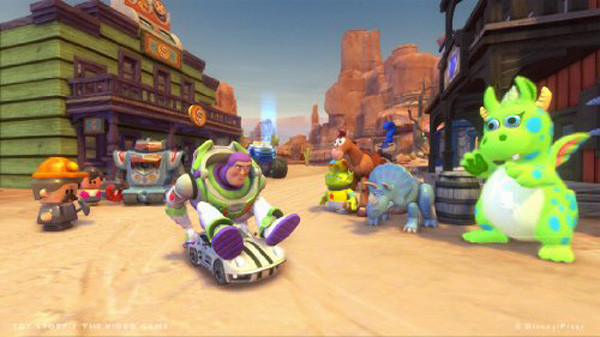 Platformers have never been synonymous with the idea longevity, but in actuality Toy Story 3 might just keep you occupied for longer than you think. The story mode itself is short, clocking a meagre six hours at best, but the vast amount of collectibles does a good job of remedying this. The toy box mode, provided you get into it, will last a while for sure. It’s just a shame that the achievement/trophy list is quite poor and uninspired. It was all very by the book and nothing really jumped out at me as a “must get” sort of affair.

As far as film tie ins go, Toy Story 3 is actually rather entertaining and much better than the usual Hollywood-clad dross us gamers have become accustomed to. Whilst it is able to tick most of the boxes and not slip up anywhere, Toy Story 3 is unfortunately lacking that particular X factor that will keep you hooked. It is a fairly solid game and might be worthy of a rental if you’re already a fan of Toy Story, as the license is certainly handled with care and respect. Toy Story 3 is not a waste of your time or money, but there are better games out there that are more deserving of your immediate attention.

No Mr. Potato Head, Some abstract levels seem out of place, Can be extremely frustrating, Makes very little sense without seeing the film, it all lacks a certain flair

Final Verdict:
FAIR
With its most recent release, the Toy Story film franchise has proven that with its quirky premise and memorable characters it is one of the greatest animated franchises of all time. The Toy Story 3 game, whilst a solid platformer, sadly fails to meet the same standards of universal excellence
A copy of this game was provided by Developer/Publisher/Distributor/PR Agency for review purposes. Click here to know more about our Reviews Policy.