Transformers: Dark of the Moon Review

Movie tie-ins are invariably appalling so it was with some trepidation that the video game version of Transformers: Dark of the Moon found itself in my disc drive. Saying that though, I was buoyed by the fact it came from a pretty good pedigree; Activision and High Moon Studios were afterall responsible for its predecessor last year. War for Cybertron actually turned out to be pretty decent. Critics had been largely positive about Cybertron’s gameplay, and heaped praise on the co-op mode and multiplayer options. What a difference a year makes… This time round the review scores aren’t going to be quite so generous. For some inexplicable reason, some of Cybertron’s best elements have been watered down for the latest release – notably, the new campaign mode is strictly for solo play and some of the online modes have disappeared.

The latest game is actually a prequel to the movie and sees the good old Autobots trying to rid the earth of those pesky Decepticons. Standard fare really. For those of you keen on the 26-year-old cartoons or the latest Hollywood blockbuster, witnessing some of your favourite characters mutate from a car or plane to a powerful robot that’s armed to the teeth is a fantastic experience. There are loads of our favourite characters in there, with the likes of Optimus Prime, Bumblebee, Ironhide and Sideswipe taking on the evil Megatron et al. It’s just a shame that there’s very little difference between each Transformer gameplay-wise. 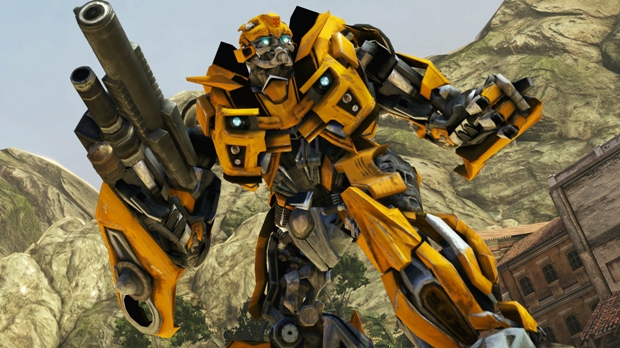 Many favourite characters make an appearance, including Bumblebee

The animations for the split-second transformations are really great to watch and you’ll no doubt find yourself switching between their various guises just for the hell of it. Besides the fact it looks cool, I really love the great noise it makes!

The biggest new addition to the game, however, is the “Stealth Force” mode, a sort of mid way point between transformations that sees your robot become a vehicle with high power weaponry and better defences. Problem is, it’s just too damn powerful, with almost unlimited ammunition and shields that withstand pretty much everything. It means that there’s very little incentive to actually become a robot 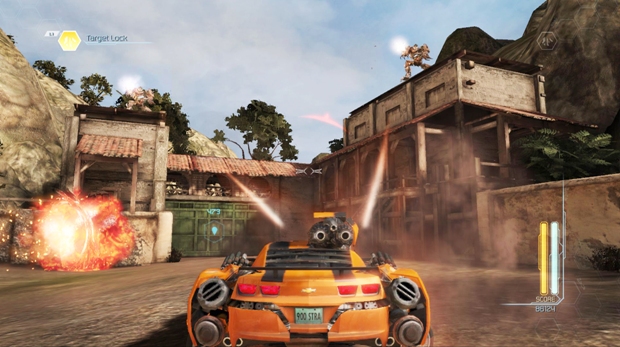 You may look great wandering around as one of the Autobots or Decepticons but your mobility is hugely restricted, the weaponry is less powerful with less ammo and you’re far less likely to survive an enemy onslaught. It’s the same story when you switch to vehicle form. Sure, it gives you the opportunity to get through some of the less thrilling levels a little more quickly but the lack of firepower and poor handling makes it an experience that should only be short lived. Racing through the levels is a perilous affair – the steering is shocking and brakes are poor at best. More often than not you will find yourself using a wall or some well-placed rocks to stem your speed.

As a result, I’d bet you’d stay in Stealth Force mode perhaps 90% of the game, transforming only when you need to move a little faster to beat a timed countdown section of a level or when you’re required to interact with some switch or door. And don’t even get me started on the weird, floaty sensation of this hybrid vehicle/robot mode, which is more than a little reminiscent of trying to walk on ice – you know the direction you want to move in but it’s a struggle getting there… and it’s not particularly pleasant at that.

The single player campaign mode is fairly shortlived, and it’s all very linear with no freedom to explore the levels. Some of the environments are interesting enough, with jungles, military bases and cities offering some variation. 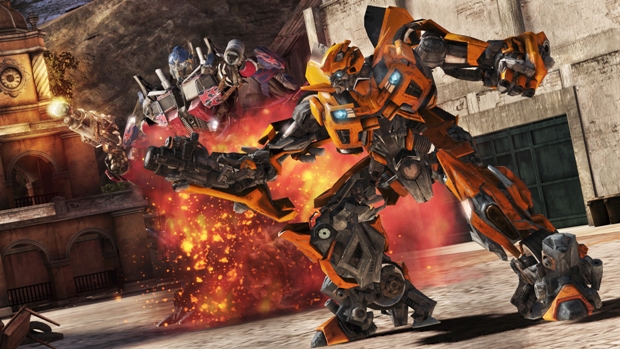 Most of the robots are big and bold, and really look the part

Ultimately, the graphics fall a little short of what you’d expect from a current gen console. While the robots themselves are well defined and brightly coloured, the enemies you encounter tend to be so drab that they often blend in to the surroundings, and are almost indistinguishable from the debris or buildings that fill the rest of the screen. The sound effects are reasonable enough and the voice acting sounds suitably authoritative when spilling from the mouths of the giant mechanoids. Explosions and background music is just fine too, but nothing exceptional. And as mentioned above, the noise associated with transforming sounds just as it should.

To be fair, the multiplayer mode is far more enjoyable than the campaign, allowing you to create your own robot in one of four classes: Scout, Commander, Hunter or Warrior. There aren’t many game options available, however, just the standard Deathmatch and Team Deathmatch games (killing 20 or 40 enemies to win, respectively) or Conquest mode, where you have to capture and protect power nodes. 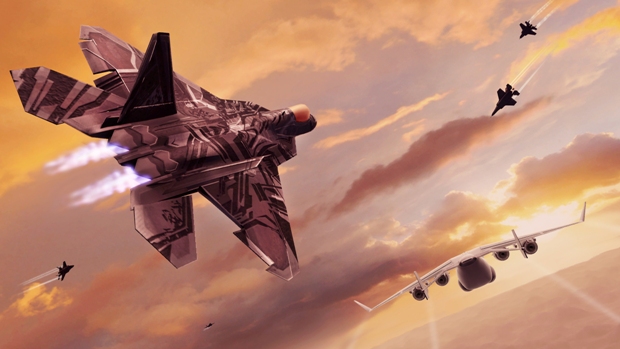 Set aside these niggles and it’s not a bad third-person shooter, there are just better alternatives available. Reprising the roles of many of your favourite characters will be an absolute blast for fans – for others, the repetitive, linear gameplay and short campaign mode make this tough to recommend too much.

Fans will love it. There are some well-known characters included - and you can transform from a giant robot killing machine to a vehicle and back again. That's just plain cool!

Sadly, it's just not as good as the last Transformers game. The campaign is ridiculously short and the levels are hugely linear. It's just a case of edging forward and fighting wave after wave of enemies.

Final Verdict:
MEDIOCRE
Dark of the Moon fails to buck the trend of most movie tie ins... it's not a bad game but nothing special.
A copy of this game was provided by Developer/Publisher/Distributor/PR Agency for review purposes. Click here to know more about our Reviews Policy.