Transformers have been given quite a bad rap in recent years, be it one terrible Michael bay film or three terrible Michael Bay films, or the Dark Side of the Moon game. One could easily be forgiven for dismissing Transformers as having had their time, but after playing but a short snippet of Transformers: Fall of Cybertron, I think we might be in for a very pleasant surprise.

First of all, not only is Fall of Cybertron an entirely original story, it also boasts the original voice actors for Optimus Prime and Grimlock, Peter Cullen and Gregg Berger, as well as Nathan Drake himself, Nolan North. This alone might not necessarily signify much, Peter Cullen also voices Optimus in Michael Bay’s cinematic abortions, but Game Director Matt Tieger told us with a real degree of sincerity that they wanted to stay true to the original animations and comics, several in game events are gigantic nods to the golden era of Transformers.

As your powers of deduction may have told you, Transformers: Fall of Cybertron is about the rise, I mean fall of Cybertron, depicting the last gasp attempts of the Autobots to keep their homeworld from going the way of dodo. 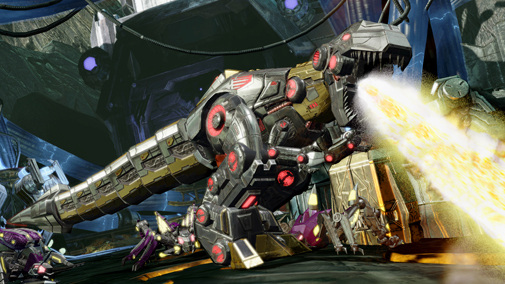 During my brief fling with Transformers, I got my hands on Bumblebee, Grimlock and the ever hilariously crap Starscream, in three seperate segments. Each level or collection of levels seems to allow control of a different character, both circumstance and story dependent, both each level also allows for both the regular and vehicle versions of each of the Transformers. Thus, each level is quite open in scope, especially the Starscream segments as his alter-ego is an attack helicopter.

Most levels are therefore consciously constructed to cater for myriad of gameplay styles and approaches, be it guerilla, fast and loose or any shade in between, the level design quite impressively caters for your every need. As a series newcomer, I’m previously unaware as to how Cybertron has been depicted but given that it’s a place of largely greyish metal, it somehow feels alive.

This attention to detail goes beyond mere environments, each character has a variety of moving parts and pistons about their person, wistfully going about their business in a manner not immediately apparent, but shows a great degree of care and precision in design. 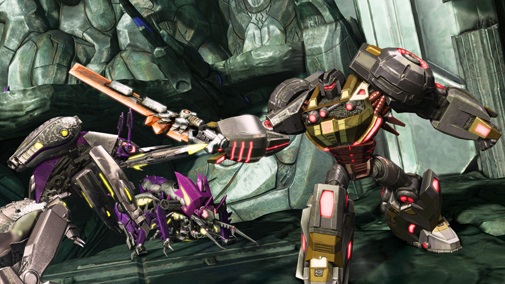 Equally solid are the combat mechanics, although Grimlock aside, the game is largely gun-based. Shooting and movement feels weighty enough to feel like you’re controlling gargantuan metal men, but not too much to feel cumbersome or unwieldy. Enemies disintegrate when shot, and with Grimlock’s excellent sword can be rendered in two. That said, all combat pales in comparison to being able to controller a huge, fire-breathing metal dinosaur, quite literally eating his enemies for breakfast. I don’t care who you are, or where you’re from, but that is prime entertainment right there. Oh and Metroplex, a transformer the size of a small city, makes an appearance.

In addition to the tasty morsel of single-player, I was also shown the customisation element of the multiplayer, although sadly no game play. Every Transformer on Cybertron has been broken down into parts, each part allows for full customisation within ‘classes’, as well as complete colour and ‘finish’ customisation. Basically, you can create the transformer of your dreams, an Optimus/Megatron hybrid with the destructive power of a small farming town and a glossy pink coat to boot.

Transfomers: Fall of Cybertron is looking to be an welcome, if unexpected, entrant into the series, staying faithful to long-serving fans whilst drawing newcomers in myself like a sailor to a brothel. Needless to say, I’m looking forward to its 31 August release date in Europe, 28 August in North America. Now, if only we can get Proposition ∞ passed in time.