By now if you wanted to see Transformers: Revenge of the Fallen you have. You got to see the Autobots once again duke it out with the Decepticons. Yeah, it was awesome. The only question that remains is whether or not the game can live up to the movie. The answer is that it can’t, but it’s still close.

In Transformers you will play as either the Autobots or Decepticons. Each has their own campaign of decent length that is based very loosely on the movie. Playing the game won’t spoil much if you haven’t seen the movie and those who have will be disappointed at how little the game did follow. Both are fun and feature a handful of robots from the movie, as well as a few only in the game. Instead of the mid size open world approach of the first game you will select your missions out of your briefing room. You can select your mission from the map and depart to a small open world setting based on the locales of the movie. Missions vary from destroying several Autobots/Decepticons to escort missions to capturing points. None of them are very fun and the only challenge comes from missions where you must fight one of the main characters. Once you begin a mission a timer will begin ticking and only stops for certain scripted events or when the mission ends. The faster you complete a mission the better the medal you get at the end. They range from bronze to platinum, with platinum usually having you complete the mission in the first few minutes. 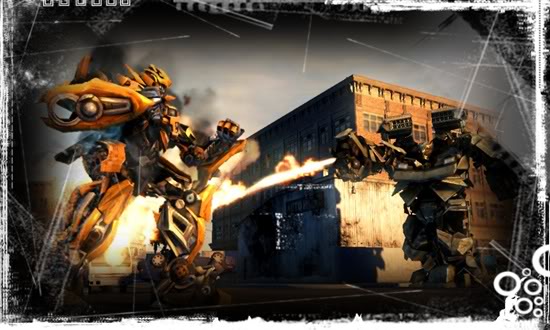 The medals are just a cheap way to disguise the lack of content in each mission. The developers hoped to force players to complete missions faster rather than notice that there is nothing else there. There are five markers to collect in each mission as well as secondary objectives, but these can all easily be completed in time for platinum once you have played the game enough. At the end of the mission all of your accomplishments are added up and a score is given. This score is then converted to Energon which can then be used to upgrade your Autobots or Decepticons. By medaling in all zonez you unlock them for free roam, but again there is nothing to do in them other than run around.

The real push for platinum or a high score is for the leaderboards. Every player who is connected to the internet while playing gets their single player campaign score on the leaderboard. You can see how you stack up against friends and against anyone and everyone who has played the game. It adds to the overall replay value because you can always try to get a better score and either keep your spot or move toward first. The leaderboard updates after each individual mission and stays very well up to date.

If leaderboards aren’t your thing and you want a good reason to play the story then take a look at the unlockables. You can unlock a great deal of content for doing menial tasks while playing ranging from driving a certain distance as Bumblebee or getting 50 Advanced melee kills with Optimus Prime. By completing them you can get Generation 1 skins for your Transformers giving then the color scheme they had in the original cartoon, concept videos, and even episodes from the original cartoon to watch whenever you want. 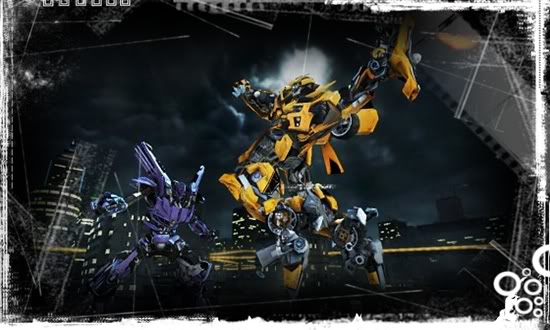 Transformers looks nice, but it doesn’t look as good as the first game. Environments look a bit plainer and even the Transformers themselves don’t look as sleek. That said the Transformers still look great, from vehicle to robot they are the best looking piece of the game. Being that it is a game about the Transformers it’s great that they look as good as they do, it is unfortunate that their level of quality didn’t carry over to the rest of the game. The sound quality is good as far as combat goes; it’s the generic transforming sound that fails to please. It doesn?t even sound like something transforming, it’s more like rubbing rough fabric against itself. Voice acting is hit or miss. You have excellent performances like that of Optimus Prime and Megatron, the good performances like Ratchet, and then there the ones like Starscream and Bumblebee. Sometimes it’s better to have no voice actor than the ones they choose for these characters. They were noble efforts, but failed ones.

For those who are still not sure about the game or those who are looking for more than a single player campaign, you are in luck. Transformers: Revenge of the Fallen features a full multiplayer mode. All of the standard modes are here, Team Deathmatch, Conquest, and the best of them being One Shall Stand which is the team leader variant. One Shall Stand has each team attempt to kill the other team’s leader which is either Optimus Prime or Megatron while protecting their own. This leaves a team of smaller Autobots and Decepticons to do the major fighting and requires a lot of tactics on the part of the team and their leader. All of the single player characters are playable including a few multiplayer only characters. The game is very well balanced and at least gives the illusion that any Transformer can defeat any other. In the case of the leaders it can sometimes feel like they are a bit over powered, especially in any mode other than One Shall Stand where an entire team can be Optimus or Megatron if they wanted. Other than that it comes down to how skillful you are with your chosen character and their abilities.

We continue to see movie games fail to live up to their movie counterpart. As far as movie titles go, this one is top notch and seems like some legitimate effort was put in to make it more than just a movie tie in, but compared to what other games are out there, it falls short of greatness. If you really like the Transformers and want to take them online for some fun multiplayer action then by all means pick this game up, it will not disappoint. If however you were looking for an engaging story or anything you can’t find in your run of the mill movie tie in game then stay away, this game will only disappoint.

The environments are bland and constrained. Voice acting is hit or miss. Missions are repetitive and boring.

Final Verdict:
GOOD
Transformers: Revenge of the Fallen is much more than what meets the eye.
A copy of this game was provided by Developer/Publisher/Distributor/PR Agency for review purposes. Click here to know more about our Reviews Policy.