Ok, I gambled on a little added fun from the Xbox Live Arcade and downloaded TRIALS HD.  I didn’t quite come up with blackjack, but I did beat the house!!! TRIALS HD is a motorcycle racing game where you not only race against the clock, but your biggest rival is physics. 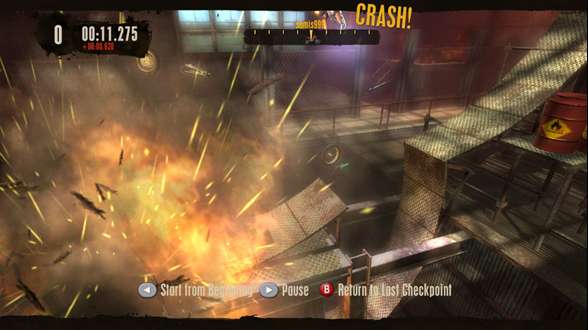 The game starts off with a small motorcycle and a course constructed out ouf ramps, platforms, tires, barrels, etc, etc. Your goal is to make it through each of the 50 plus courses in the least amount of time possible. Check points through each course are forgiving and after each wipe out, you have the option of starting at the last check point successfully passed, or from the very beginning of the course. As you progress, you unlock new courses, faster bikes, and mini games. We’ll get to the mini game, relax Sparky!!!

Physics play the biggest role in this game. Everything from how your motorcycle responds with the terrain, to how far forward or backwards you tend to lean. Don’t get me wrong, nothing beats getting some huge air and attempting to pull off a flip or two, but remember one thing – what goes up, must come down. You must be sure to adjust yourself to the correct angle to stick the landing, otherwise you may find yourself face down and you bike in pieces. 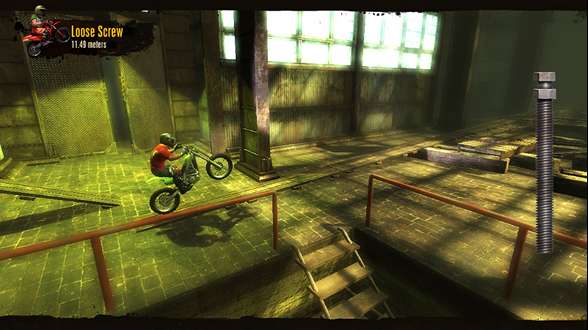 Over the river and through the woods……..

You will get to a point in the game where you’ll feel like there is no possible way to completed a track and most likely you’ll walk away from the game. Next time you come back to try those difficult tacks again and see you other friend’s posting times for completing those very same tracks will give you the drive to tackle them again.

TRIALS HD included a course editor to allow you to construct your own tracks to race through. You can also share those tracks with others to test their skills on and see who has the better time.

Alright there Sparky, I know you’re chomping at the bit waiting to hear about the mini games. There are about 12 different mini games to unlock that will test your skills that you obtained from the regular race modes. Everything from transporting bombs as far as possible before they explode from bouncing around too much, to bailing out and hurling your rider through the air for either distance, or see how many bones he breaks. There are also games straight out of a circus that have you riding either on, or inside a giant cage ball.

All in all, for 1200 Microsoft points, TRIALS HD isn’t a bad buy, 800 would feel a bit better though. I’d suggest trying out the demo before going in full throttle or try the demo and decide for yourself.

Final Verdict:
GOOD
Ok, I gambled on a little added fun from the Xbox Live Arcade and downloaded TRIALS HD. I didn't quite come up with blackjack, but I did beat the house !!! TRIALS HD is a motorcycle racing game where you not only race against the clock, but your biggest rival is physics.
A copy of this game was provided by Developer/Publisher/Distributor/PR Agency for review purposes. Click here to know more about our Reviews Policy.