Troll And I Review – Ambitious But Flawed

Troll and I may not have all of the bells and whistles one expects from a triple-A title, and you may give a slight chuckle when your eyes wince at the troll for the first time and its PS2-style graphics, but the game and its developers, Spiral House, seemed to put all of their heart into this little indie title that couldn’t live up to its massive ambitions.

When first getting my hands on Troll and I, I was actually quite amused with the way the game handles its mechanics. The game features several variations of game genres in third-person…you’ll be doing a lot of platforming, climbing, carry out stealth kills and solve puzzles, and that too all within the first hour of this game. It’s actually quite astonishing how the developers, who possibly don’t have a massive budget, managed to mash such a variety of genres into the game. Unfortunately, most of it doesn’t work as intended.

Right from the start you shouldn’t expect much from the story. It’s an interesting concept of monsters coming out of an unknown, magical portal-like area that begin attacking the local residents. The co-lead character Otto (a.k.a. the title character “I“), is a teenage boy who gets caught up in all of this commotion when monsters rain out of nowhere in the wild forests of Scandinavia. Interestingly enough, he doesn’t seem startled or surprised at their presence. Your job as Otto will be to gather and shape sticks into staffs, kill the biped rat-looking creatures, goblins, orcs and other mythical monsters. 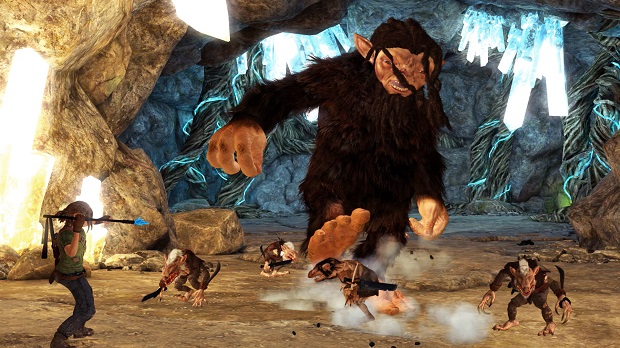 "With two simple button presses you can switch between Otto and Troll at any moment. The game allows you to call the other to follow, or having Otto ride aboard Troll’s shoulders, and even attack when the enemies are on you."

Eventually Otto gets into a seriously sticky situation where the monsters get over his head and begin to heavily outnumber him. Alas, center stage, comes Troll. Troll defeats the numerous enemies in a few swift strokes and saves Otto from certain death. It’s from that moment that Otto and Troll form a bond that allows them to work together and stop the growing number of enemy forces.

An interesting part about Troll and I is that you don’t always have to play as Otto. With two simple button presses you can switch between Otto and Troll at any moment. The game allows you to call the other to follow, or having Otto ride aboard Troll’s shoulders, and even attack when the enemies are on you.

There is some variation in attack styles between the duo. Where Otto has to use stealth and dodge and attack variations, Troll simply smashes and punches his way through waves of enemies. The cooperation between the unlikely duo is met with challenges such as gaining access to difficult areas, or helping one another out in achieving specific goals.

The game also supports couch co-op. Grabbing a friend and a second controller allows one player to control Otto while the other controls Troll. Helping one another along for the journey becomes a lot more fun than having to switch between characters while playing alone. 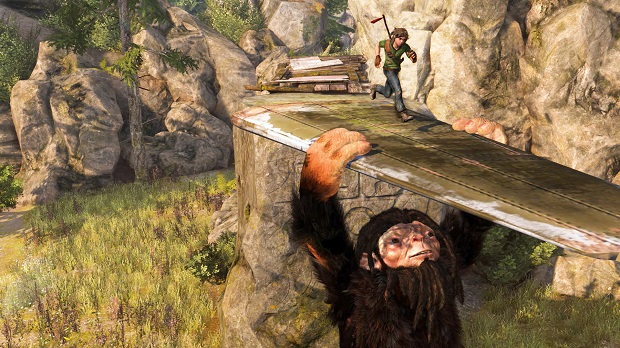 "But the sluggish controls make Otto and the slow moving Troll a pain to navigate at times."

As Otto has a broader range of combat, he is able to gather material and craft various types of melee weapons along the way. The weapons list shows what materials are needed and they shimmer in the wilderness so its easier to spot them. The crafting is fun for better and stronger weapons, but it doesn’t have a full range of interesting and unique styles.

This all might sound fun and interesting, and to some extent it is. But the sluggish controls make Otto and the slow moving Troll a pain to navigate at times. And like many unpolished games, there are moments of running, jumping and dodging that have to be so precise that being slightly off will almost always result in death and a restart. Add to that the lagging frame-rate and the shading issues where the game began to flash between dark shade to light shade under the tree canopy in the daytime. Other bugs did occur as well: such as invisible enemies that weren’t there, and weapons that went through enemies and didn’t cause damage. 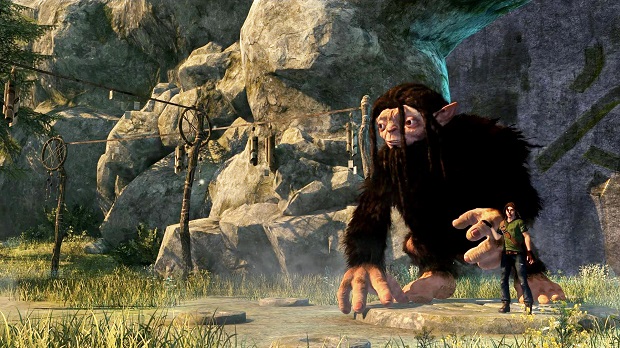 "Troll and I had some great ideas on paper but its execution is flawed."

Don’t expect the voice act to be stellar. Otto’s voice sounds like he was forced to read what was on the script page. The voice acting tries to grab hold of the player’s feelings, but never really manages to achieve it. The only saving grace is the game’s soundtrack which can be pretty exceptional at times.

At this point Troll And I is suffering from several bugs, uneven voice acting, and several graphical issues. With a stronger story, better elements, and smoother graphics, this game could have actually been very close to a new triple-A franchise. It focuses a lot on genre crossover ideas, which the team should be lauded for, but its implemetations can be best described as passable. Troll and I had some great ideas on paper but its execution is flawed. In the end what we have is a unpolished game with frustrating controls that isn’t worth anyone’s time.

Final Verdict:
BAD
Troll And I tries too many things at the same time. It's a classic case of a development studio getting over ambitious and failing to achieve their goals with the game. With more development time, Troll And I could have provided a memorable experience but right now players should stay well away from it.
A copy of this game was provided by Developer/Publisher/Distributor/PR Agency for review purposes. Click here to know more about our Reviews Policy.