Posted By George Reith | On 16th, Jan. 2012 Under Reviews | Follow This Author @GNReith

Ever wanted to take on the role of a dictator of a sub-tropical island nation? Me neither, but that’s what Tropico 4 lets you do. In the vein of sim city, Tropico sees you managing your island nation in terms of its foreign policy, economy, education etc. Though the series has been running for some time on PC, it isn’t often we see this kind of game brave the challenges of a console port. Though elements of the console conversion diminish some of Tropico’s quality and appeal, it remains a wholly enjoyable game that feels fresh and unique for a console title.

One of the first things that hits home in Tropico 4 is the game’s style and tone. Though it deals with serious issues of political antagonism and methods of bureaucratic deception, it often does so with a huge dollop of charm and humour. The game casts you as the dictator of an island nation, and often makes light of your powers over life and death and of mass censorship. It certainly gives the game a unique feel, and it’s always amusing when dealing with the various world powers and factions in the game who, of course, adhere to belligerent stereotypes. This is a game that uses socio-political clichés as a constant source of comedy, and it works rather well. 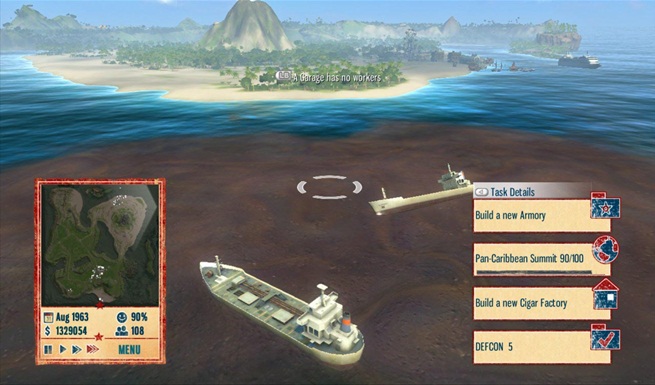 The visual palette is fairly stimulating, but the graphics in Tropico 4 are never going to leave you breathless

It’s a shame that the rest of the presentation isn’t quite as strong. The game’s visuals are fairly competent technically, and the bright and lush isles of Tropico make for some stimulating and colourful level designs, but the genre of the game doesn’t really ever allow for the visuals to shine. You’ll spend a majority of the game with your camera zoomed right out for convenience’s sake and, even if you do zoom right in, the clarity and definition at the microscopic level isn’t quite good enough to give a grand sense of scale. The music similarly is bright, chirpy and appropriate, but the style of flamenco guitar and samba music starts to get quite repetitive across a lengthy session on Tropico 4. None of these presentation elements are necessarily bad, but you won’t walk away with a particularly strong impression from them either.

Though the game may not look all that enticing, its looks are deceiving. Those who are willing to brave the unassuming façade will be impressed with Tropico’s tight and addictive gameplay mechanics. Most players will wind up in the game’s tutorial as their first stop, a four stage affair that gently drops players into the thick of Tropico’s mechanics. It is fairly good at introducing the wealth of gameplay options and strategies to players but, whilst it doesn’t drag on and has a fairly snappy pace, it does skip out a few gameplay elements that players are forced to work out themselves as they go on. This leaves the player with a refreshing sense of freedom in some ways but, as the manual wasn’t particularly in depth either, this did become frustrating at certain times during my play-through. Another teething issue is the control scheme. After a certain time it becomes apparent that it is quite well thought out and intuitive. After all, Tropico 4 is a game with a wealth of different actions, factions and strategies to balance and execute, so the control scheme is never going to be as easy to pick up as the controls for a shooting or action game. That said, the controls take some getting used to before they feel natural. You’ll easily spend your first few hours in Tropico tripping over the controls, a fact that is likely to put off players who are new to real time strategy games such as this. 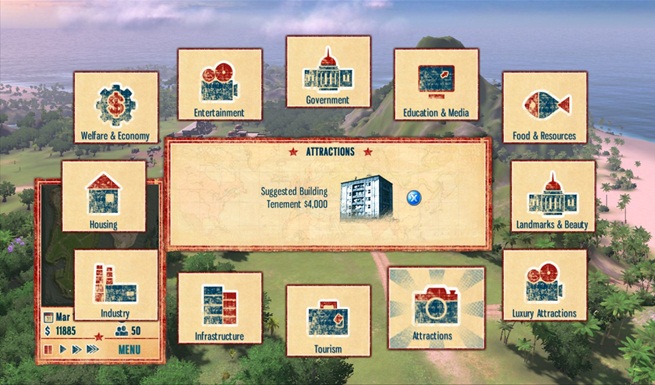 The controls can be a bit fiddly, but radial menus keep things smooth and console friendly

Once the ball gets rolling though, Tropico 4 really comes into its own. What really gives it an edge is the sheer quantity of things to do and manage at any one time. Tropico is not the type of strategy game where you spend endless amounts of time staring at a bar indicating your progress of unit or building production. Part of this snappy pacing is to do with the ability the player has to control time. It helps manage those more hectic moments by letting you stop time, whilst simultaneously letting players fast forward through the more tedious waiting times of building construction. Things are never dull in Tropico on account of this, and also due to the need to satisfy the various factions and foreign powers that interact with your humble island community. Offering a free housing policy will satisfy the communist supporters of Tropico and the USSR, but will anger the capitalists and sour your relationship with the United States. Likewise, a lack of churches and cathedrals will upset religious groups and could lead to rebellions amongst your people, but too many will upset your trade routes with the Middle East who will subsequently consider you a religious extremist. You are constantly made to address such balances in power, and the need to constantly tinker with the management of your empire’s social, economic and political elements is extremely addicting. It sounds a little too complex to work well, but the game does a good job of providing you with enough information to make sense of it of all throughout.

This also goes to show the depth of gameplay on offer. Just when you think things can’t get any worse, the more random elements of Tropico come into play. Tornadoes, volcanic eruptions, capsized oil tankers, a US invasion, rebellion amongst your citizens etc. It all serves to keep you on your toes, and Tropico 4 always cuts a fine balance enough to keep the game hectic, yet manageable. The power can also go to your head, with interactions being available for each individual citizen of the island as well. Reckon that smooth talking intellectual is likely to cause trouble later? Then you can arrest him, have him executed publicly or, should you wish to save face, have your secret service arrange for him to have an unfortunate “accident.” It shows the amount of depth the game has, yet Tropico offers enough hints to guide you to each subsequent task you may need to take on without ever becoming patronising or restrictive. 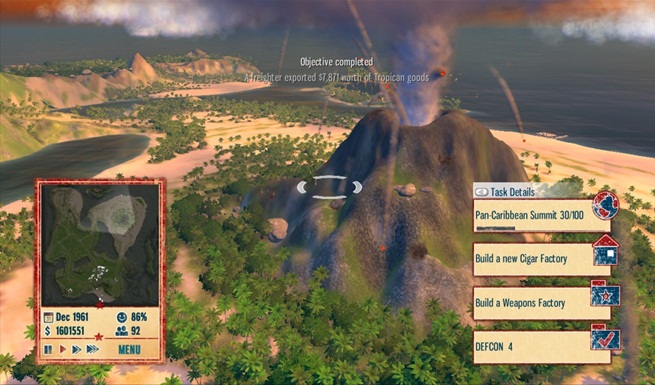 There’s always something to do in Tropico 4; a pacing element it absolutely nails

If you are able to get over the initial hurdles presented by Tropico 4, the game offers a fairly decent amount of playtime. You have a lengthy and enjoyable campaign that, despite taking the form of a series of largely unconnected missions, does a good job of pushing you out of your comfort zone and forcing you to try out new tactics in each stage. After that is the sandbox mode, a randomly generated map where your only goal is to become the greatest power in the world by any means necessary. This in itself offers a seemingly limitless amount of content, though things can get a little repetitive. Without the restrictions of the campaign, it can be a bit too easy to fall back upon a set strategy to get ahead, especially in the earlier stages of a game. That said, it’s very difficult to stay mad at a game as charming as Tropico 4 for something of this nature. Some kind of co-operative mode may have helped improve the game’s lifespan even more, but maybe that’s what we’ll have in store for us with Tropico 5?

For all the faults associated with a port of a strategy game onto consoles, there is honestly little else like Tropico 4 on the Xbox 360 at the moment. It’s fun, deep and bizarrely amusing in its political stereotypes. If you really hate strategy games, Tropico 4 isn’t intuitive or streamlined enough to change your opinion. That said, if it sounds like the kind of thing you would be into, Tropico 4 on 360 comes highly recommended, provided you’re willing to work through a few teething problems.

There isn't much else like it on consoles, Very addictive, Has a lot of charm and humour, Deep strategy, Always something to do, Controls work quite well, Lots of content

Visuals aren't particularly assuming, Can get repetitive, Takes some getting used to, Controls are fiddly to begin with, Tutorial isn't especially comprehensive

A refreshing take on the sim city formula that sees players step into the shoes of a foreign dictator, Tropico is fun, deep and extremely addictive, but a sometimes fiddly control scheme and taxing learning curve may put some players off

A copy of this game was provided by developer/publisher for review purposes. Click here to know more about our Reviews Policy.
Tagged With: Tropico 4, xbox 360