Going into Tropico 5’s DLC Waterborne expansion pack, my hopes were high that we would be seeing a reinvention of the popular political dictatorship simulator. Sadly, it does very little to innovate upon the series in any meaningful way outside of giving the player some new maps to play in and a small bundle of new maritime vehicles. Right off the bat, moments after booting up the game, I encountered numerous persistent graphical errors that were nothing short of abhorrent. Needles to say, first impressions weren’t exactly stellar.

With that being said, the base game is just as solid as its predecessors, offering deep and intricate trading and populace simulation. The expansion, like its base game, does a wonderful job of giving players a number of approaches to playing the game. It also presents just as many ways of reaching the endgame content as the base title. 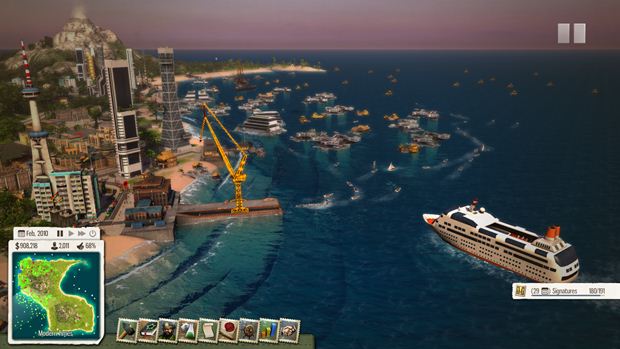 "The policies can offer you some freedom for how you lead your people, but they can feel useless during the later stages of play."

It opens up with a somewhat limited, albeit comical, character creation screen that can see your dictator take the form of a corn-rowed, lennon-styled, glasses wearing, trench coat clad agent of subterfuge. That is however, about as far as it goes. The character creation screen is very limited in its options, even going so far as preventing you from choosing a name for your character,you must instead choose from a predetermined list.

Once the game begins, you will instantly fall back into your regular Tropico pace. Building your empire feels just as hollow as before, putting an emphasis on your own creative drive and want of ruling those beneath you. Despite the advisors pushing you down a development path that will help your people grow, there is no sense of an overall driving narrative.

I was made aware of a ruling King that I would do odd jobs for in an attempt to appease him. He soon died and was apparently replaced by a new king, without so much of a “meet the new guy in charge” message. This lack of feedback keeps the game feeling disjointed and lacking any serious outsider influences that would change how you build your island. 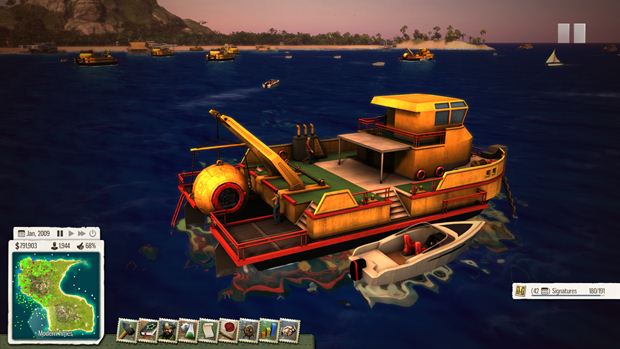 "One of the largest problems with this DLC is the more recently introduced construction menus which obscure a large portion of the screen and, like the policy menus, are poorly presented."

Unlike Kalypso Media Digital’s other world building game, the expansion seem to be considerably more simple than previous iterations of the game, even across multiple difficulty levels. Within 45 minutes of starting the game I was consistently churning out profits and my approval rating from the populace never dropped below 60%. After one hour I had already declared independence from the established rule and set about making allies for the upcoming war.

Once independence was mine, the game opened up a little, but to no great degree that made it feel new or special. As usual, your advisors will come to you with chances to further your own gains by manipulating trade or rigging elections. When the great war broke out, I drove up the price of Iron and sold it to the allies whilst holding political talks with the Axis forces to grow my revolutionaries.

The policies can offer you some freedom for how you lead your people, but they can feel useless during the later stages of play. Despite never losing any elections and never needing to resort to fixing the ballot count, I was still able to run an authoritative police state. This was mostly thanks to me using my excessive wealth to support low income families with extra food and support the entire island in the wake of natural disasters which can really throw a spanner in the works. 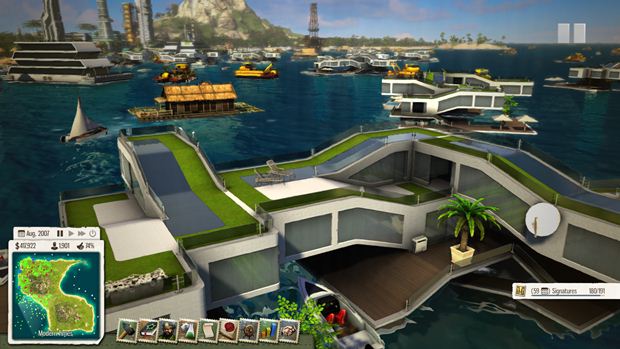 "The “new campaign and story spanning 6 challenging missions” are, as I mentioned, somewhat lacking in the way of new content and I find it hard to justify the expansions somewhat high price point."

At one point, my island was struck by an unfortunate series of events. A rebel invasion forced me to invest in a number of military buildings to protect the island, leaving me low in excess funds. Following their attack, a storm consisting of three twisters struck the island partially destroying a number of homes. After this, a tsunami struck the island, flooding great swathes of coastal homes. One of the policies in the game is a relief fund for those affected by the disasters. So having access to the policies is still interesting and useful, but only if you don’t have enough cash to throw at the problem, plus the menus are just obtuse enough to make you avoid using them as intended.

One of the largest problems with this DLC is the more recently introduced construction menus which obscure a large portion of the screen and, like the policy menus, are poorly presented. All of your dealings in matters of trade and policy are handled through a series of unintuitive menus that would be better suited in a grand strategy game like Europa Universalis. These menus make the progression hard to track as most things are represented by small avatars and overly brief descriptions with no real connecting threads to keep progress easily traceable.

The “new campaign and story spanning 6 challenging missions” are, as I mentioned, somewhat lacking in the way of new content and I find it hard to justify the expansions somewhat high price point. They bring little in the way of new content to the game and you really only get your moneys worth from the new vehicles and offshore constructions that open up new trade avenues. But beyond this, the DLC does fall short of expectations.

The DLC offers an entertaining and in depth political simulator that remains engrossing for both new and veteran players.

Constant graphical errors, an annoying soundtrack and radio host, as well as obtuse menus do little to incentivize gamers to continue playing. The high price point is also extremely hard to justify.

Final Verdict:
MEDIOCRE
Ultimately, this expensive and disappointing DLC does little to impress and is hard to recommend to players of Tropico that have only a passing interest in the game. The new maps and new vehicles don’t change the game enough to justify a purchase either. This is one for the hardcore fans only.
A copy of this game was provided by Developer/Publisher/Distributor/PR Agency for review purposes. Click here to know more about our Reviews Policy.