Tiger Woods’ PGA Tour 11 is the latest installment in EA’s premier golf franchise. It was developed by EA Tiburon studios and published by EA Sports. It is available on PC, Xbox 360, PlayStation 3, Wii and iPhone. The PS3 port will be the first title for Sony’s platform to support their proprietary PlayStation Move motion-sensing technology when it launches later this year. The Wii port utilises Nintendo’s Wii MotionPlus peripheral; as did PGA Tour 10.

Tiger has courted controversy this year with both poor personal conduct and poor golfing. Luckily, this does not extend to his gaming exploits. PGA Tour 11 introduces a number of new features which not only add further realism but also some much-needed challenge to the proceedings. You can still set the game up in such a way to make birdies and eagles easy to pull-off, but if you prefer a realistic putt you’ll find the new features (such as the focus system, variable wind, and optional true-aim control setup) more than have you covered. Not all of the changes and additions to this year’s game are as significant as these, but most of them are welcome, and given that PGA Tour 10 was so great it’s impressive that its successor can be so easily recommended. 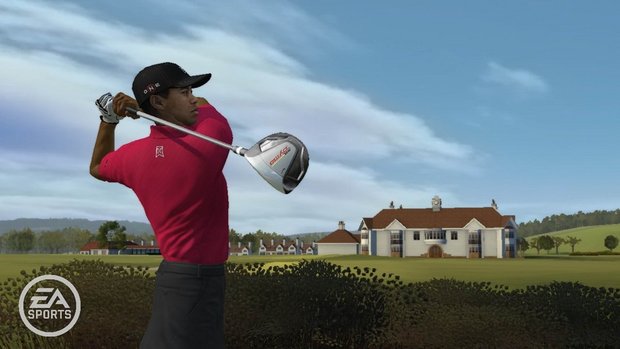 Tiger is still the best Pro-Golfer on the game, but players may find more satisfaction in creating a Custom Golfer.

Players can choose from >25 professional golfers and several novelty characters in PGA Tour 11. While Tiger’s great ratings for power, accuracy, control, and putting make him the obvious best choice, it’s far more rewarding to play as a custom golfer. Not only because digital camera support makes it easy to get your face in the game, but also because custom golfers improve as you earn experience, whereas the stats for other golfers are fixed. You can accumulate EXP across several modes and purchase stat increases & better equipment. The only downside to playing as a custom character is that you have to choose one of 20 rubbish nicknames for spectators to cheer for. Nothing quite detracts from the sense of occasion as you sink a winner on the 18th hole at St. Andrews like hearing some moron cheering for Big Dog, Blammo, or Playa.

After creating your custom golfer, you’re encouraged to complete an eight-step program tutorial that does a great job of curing your addiction introducing you to some of this year’s bigger gameplay changes – while also rewarding you with a decent number of experience points. The most significant addition, which features a number of times during the tutorial, is the concept of player focus. This ingenious system adds a layer of strategy to every shot by limiting the use of player aids. You start each round with a limited amount of focus, and you expend a portion of it anytime you: hit a ball at more than 100 percent strength, apply spin to a ball while it’s in the air, temporarily reduce the size of your targeting circle with the new accuracy boost feature, or use the putt preview. The only way to replenish your focus, which doesn’t happen quickly, is to play shots without using any assists. It’s a superb setup, because it forces you to take advantage of these arguably overpowered aids only when you feel you really need them, rather than using them as crutches for every hole. This raises the question of why this limiter hasn’t been implemented before now. 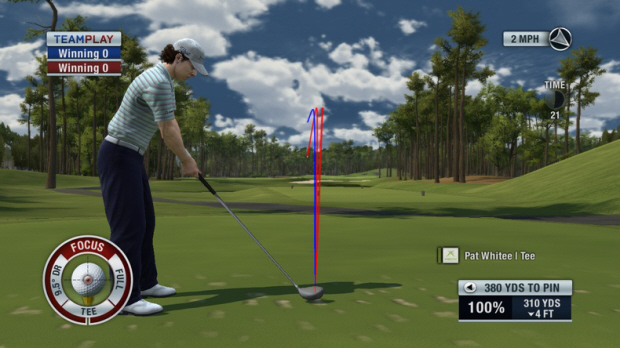 The new Focus feature makes for a more challenging game.

The final tutorial encourages you to play a hole using the new true-aim control system, which makes the game even more difficult and realistic. The basic controls are unchanged, so you still swing the analog stick back and forth as if it were your club, but most of the aids disappear. A single arrow on the horizon shows where you’re aiming; scattered markers are the only indicators of range and elevation; and draw & fade are applied by changing where you strike the ball rather than using a secondary targeting circle. Another neat touch is that you watch your shots play out as if your head were following the ball. True aim isn’t for everyone, but it’s a great option nevertheless, and since you can use it while playing on any of the four difficulty settings and in almost any mode, there’s no reason not to try it.

Tiger Woods PGA Tour 11 has so many different modes of play to choose from that the menu screens can seem overwhelming. For example, simply hitting “Play Now” takes you to a second menu where you can choose from a dozen traditional modes (including stroke play, match play, bingo bango bongo, four ball) and eight minigames (including capture the flag, target, closest to the pin, T-I-G-E-R). All of these modes are fun and are great for practicing different aspects of your game. Most are best enjoyed by 2-4 players, but there are a few that work just as well when you’re golfing solo. 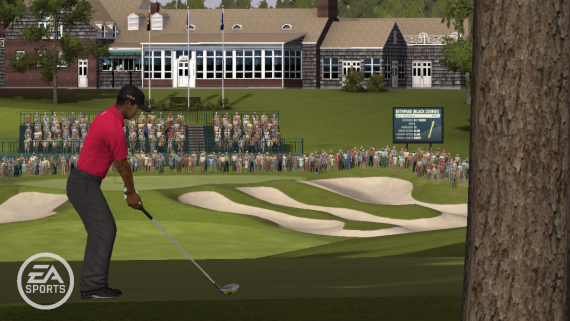 The crowd will cheer for your golfer, using their name or 1 of 20 nicknames.

Depending on mode you choose, you may choose which of the game’s 17 real-world courses you want to play on before you can start. Alternatively, you can opt to play on a random course composed of holes from different courses, which is a great way to get a feel for just how varied the different locations are. Classics like St. Andrews, TPC Sawgrass, and Pebble Beach are joined by five new courses this year (Celtic Manor Resort, The Greenbrier, Liberty National, TPC Scottsdale, and Whistling Straits). If you follow Golf you may notice a couple of these featured as the homes of tournaments in 2010. Extra real-world and fantasy courses are available to download via PSN or Xbox Live – the Wii port has a bumper selection of courses included on-disk instead.

Try online play and you have 10 different gameplay modes to choose from, but sadly none of the minigames are available. You can play against friends, pair up with randomers for ranked matches, and compete in daily, weekly, and play-the-pros tournaments that let you play alone and upload your scores to leaderboards. When playing in tournaments, you can see other players’ names and scores on the leaderboards next to every hole, and a news ticker lets you know when other players have done something significant, which is a nice touch. 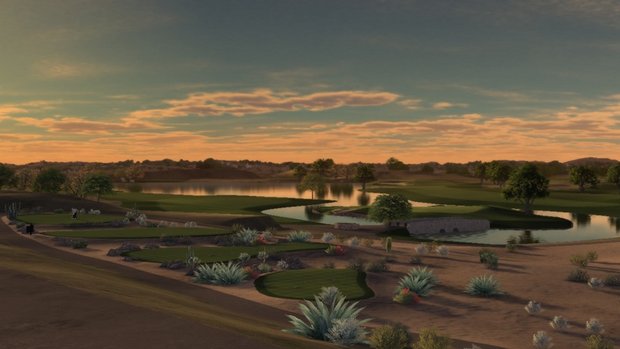 New to Tiger Woods PGA Tour 11 is online team play; for between 4-24 players. Player’s can choose to represent either the East or West. When enough players have joined the session, everybody gets paired up with an opponent and tees-off at the same time. You can your opponent’s shots, and the shots from any other players who are on the same hole as you. These are shown as vectors tracing each shot. Online team-play is an interesting addition to the game, but getting enough players together at the same time can necessitate extreme patience – often it means that the first players to join have to wait for more to show up. Even if you skip the spurious options that let you choose to play in certain weather conditions or with certain green speeds, you’re much more likely to end up in a four-player team game than a 24-player one. 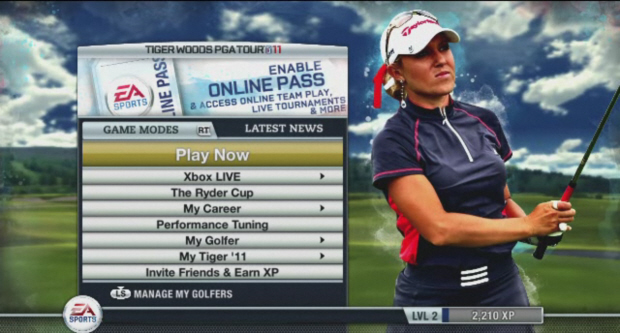 There are more gameplay options than you could shake a 5-iron at.

Whether you’re playing solo or split-screen on the same console, the new Ryder Cup mode is undoubtedly one of the best modes if you’re not playing as your custom golfer in Career mode. Although the default course to play on is Celtic Manor’s Twenty Ten Course – designed specifically for this year’s event – you can take the Ryder Cup to any course that you like, and before you start playing you can tweak your chosen team’s roster. Because there are barely enough real golfers in the game to fill both rosters, female players such as Paula Creamer and Suzann Pettersen make the cut by default, and if you want to swap them or any of the other players out, there are very few alternatives to choose from unless you dip into the opposing team. It’s possible to select European players for the US team and vice-versa, which is strange to say the least; especially since PGA Tour 11 will let a player represent both teams simultaneously. If you mess with the default rosters too much, the game can have a problem remembering who is playing for which country and when.

Look beyond the shenanigans with the roster and you’ll find that the mixture of foursomes and fourballs in Ryder Cup mode is made greater than the sum of its parts by the fact that when multiple matches are being played simultaneously, you have the option to play as a different team member every time you move to a new hole. As the tournament employs a match play system, it doesn’t matter how many shots you win a hole by – just that you win. So, if you manage to take a two- or three-hole lead as one golfer, it might make sense for you to lend your expertise to another. After every hole, you’re presented with a scoreboard that shows where every player is on the course and whether they’re winning, losing, or tied. Winning a round by one hole is worth as much to the team as winning a round by several holes, so playing through the whole tournament is an interesting balancing act. 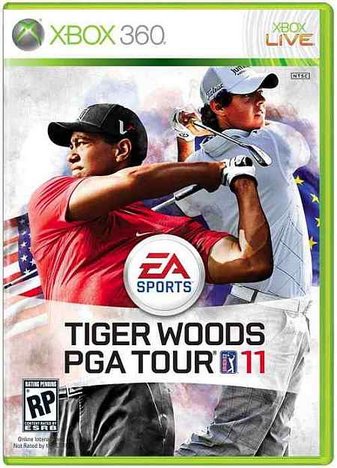 Could the inclusion of another golfer on the cover (a first for the PGA Tour franchise) signal a move away from Tiger Woods?

Regardless of which mode and gameplay options you pick, Tiger Woods PGA Tour 11’s visuals don’t disappoint. All of the pro players are instantly recognizable, and other than some occasionally odd movements while walking, they’re animated very well. Custom players can look every bit as good provided you don’t go crazy with the editing tools, and depending on your taste in golf gear, you can make them look even better when you start spending your experience points (or real currency, if you prefer) in the pro shop. The courses are even more impressive, with dynamic lighting for different times of day, good-looking weather effects, and grass which moves in the wind along with the trees and even your golfer’s clothing. The camera doesn’t always do a good job of showing you what’s going on when it tries to be clever on the putting green [as ever], but for the most part it does its job so well that you might wish the same coverage was available for the real thing. Sadly, your ears aren’t in for the same treat as your eyes, but at least last year’s appalling commentary has been improved enough that it doesn’t demand to be turned off.

That Tiger Woods PGA Tour 11 improves on its predecessor is impressive. That it improves enough to be recommendable without hesitation (even if you own last year’s game) is remarkable. Even if you have little interest in the new Ryder Cup and online team modes, and don’t see yourself playing with the new true-aim system, the introduction of focus along with a host of other less significant improvements out on the course still make this the golf game to own.

Not enough pro-golfers for the new Ryder Cup mode; Camera can be awkward; Computer has difficulty keeping track of roster.

The latest Tiger Woods game is an improvement in many ways over the previous installment. One to be recommended.