Do you love stick shooters? Can’t get enough of the Comedy Central television series “Ugly Americans”? If you answered yes to both of these questions then boy do I have the game for you! Ugly Americans: Apocalyspegeddon is more than just an obnoxious title, but it’s also the latest stick shooter to grace the Playstation Network and Xbox Marketplace. Priced at $10, the title hopes to deliver a fun game for fans of the series while simultaneously advertising the television series for those of you who haven’t seen it before.

This game plays much like a strange cross between your favorite 2D scrolling arcade game of yesterday (Such as TMNT, Simpsons, or X-Men) and Gauntlet. Four players may simultaneously navigate the relatively flat environs of Manhattan shooting various projectiles at dozens upon dozens of enemies as they hope to overwhelm you with sheer numbers. Each character is slightly different catering to different play styles. Further customization can be obtained by leveling up your character through killing the endless hordes of enemies in each level. 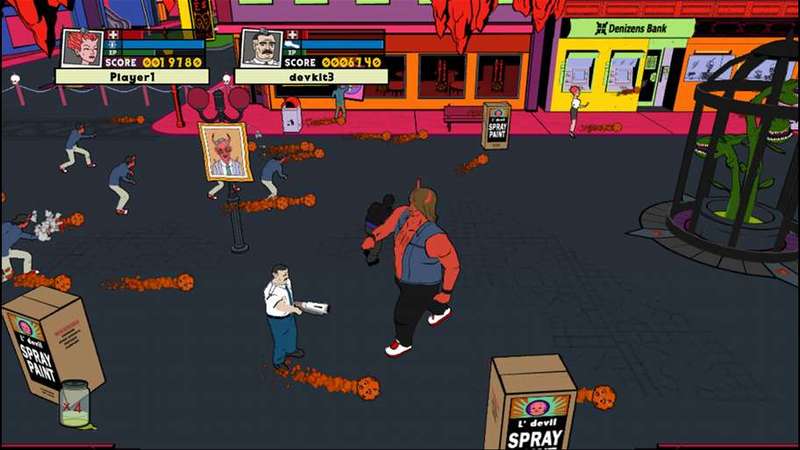 One neat thing about this game in particular is the sheer number of weapons you can obtain throughout the course of the game. Each weapon is a different type of projectile that you can shoot out of the gun you carry and has varying stats such as path, power, fire rate, and effects on your base stats. Some weapons also have special effects when wielded by a particular character giving additional bonuses such as slowing enemies down or having the ability to stun them. All you need to do in order to get access to a weapon is to pick it up inside a level. This will swap your current weapon for the one on the ground. After that, you can switch your current weapon before every mission at no penalty with any that you’ve picked up before in any level. Between the great variety of weapons and bonus effects on different characters, there are many, many different ways to mindlessly slaughter the enemies that stand in your way.

Difficulty in this game is much harder than others of its type. If you aren’t accustomed to stick shooters, expect to die several times on the first level before you make any real progress. At times, the difficulty of new levels can be so daunting that you’ll find yourself revisiting old, easier levels just to grind out enough experience points to increase your stats to a respectable level. The amounts of enemies that appear in each stage also vary with the number of players present, so getting some buddies won’t necessarily make the trip any easier. 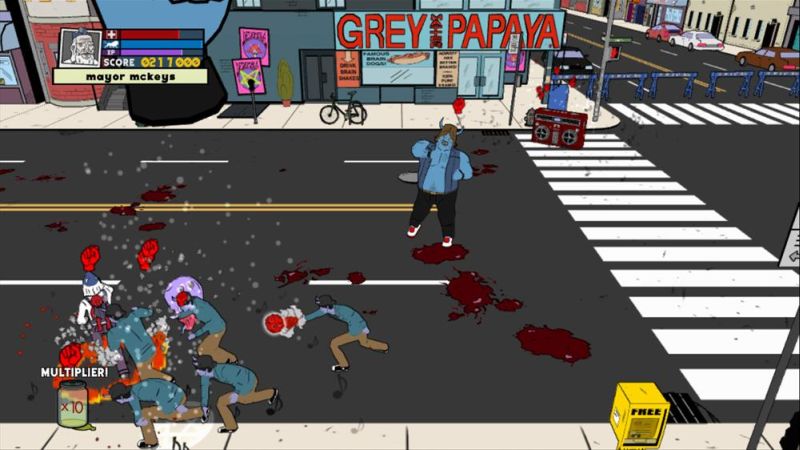 The cast of the television series lends their talent to the arcade game, giving full voice acting for your bloody trips through the various levels as well as several cut scenes throughout the story. Unfortunately, the cut scenes were hastily done stop action scenes with limited movement, it’s almost like reading through a children’s book ultra-fast, except the content contained in this game is by no means suitable for children in any way shape or form. On the plus side, an entire episode of the television series is available to unlock if you pour enough time into the game to gather the necessary funds to purchase it. Fans of the series will also recognize many of their favorite characters as well as a few of the enemies that have appeared throughout the series such as the Man-Birds.

Ugly Americans also gives you the choice to play on console or over Xbox Live if you so choose. While there are only 11 levels throughout the story, two of which are boss fights, it’s still a fairly enjoyable experience with or without the Ugly American branding. While I think fans of the series may be the only demographic that can truly appreciate all this game has to offer, those who have never seen an episode should not be intimidated by the title either. The game can be a fun way to spend a rainy afternoon with some bored friends, and best of all, you can download a free demo to try it out and see whether you like it or not before purchasing it! The title is very hit or miss, but far from a disappointment earning it a very lukewarm score.

A fun pick up and play game that remains true to its roots.

Doesn’t offer much to non-fans of the series that differentiates itself from the competition.

Final Verdict:
GOOD
Ugly Americans makes its video game debut with this new stick shooter, remaining faithful to the television series.
A copy of this game was provided by Developer/Publisher/Distributor/PR Agency for review purposes. Click here to know more about our Reviews Policy.