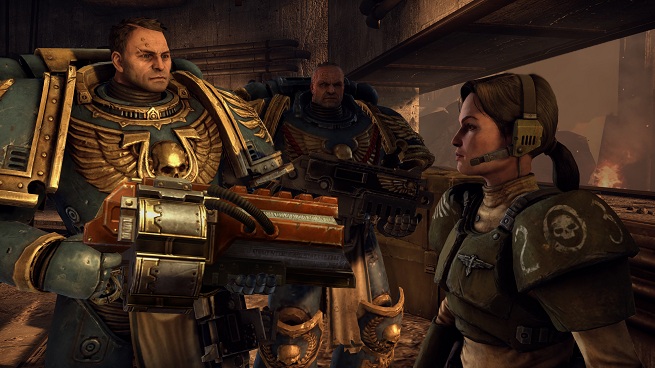 Picture an entire world that you can only see from a distance.  You can only have limited interactions all from a distance, not seeing what is really going on and what kind of relationships people have with each other.  Not knowing how people react to one another, or how they react toward an Ultramarine.  This has been what the Warhammer 40,000 franchise has been like… until now.  Now you are on the front lines with Warhammer 40k: Space Marine.  You can now see just big a Space Marine is and how detailed the huge armor these high ranking warriors dawn over their human bodies.  Now you have been zoomed in on this huge world or franchise of Warhammer 40k to see what is is like, and that alone is very intriguing as well as interesting.

There are humans, Space Marines or Ultramarines and then there are Orcs and Chaos Warriors which are the equivalent of an evil Space Marine in terms of rank or power.  Space Marines are not even held in the same class as human/civilians, in fact they are practically worshiped as somewhat of a kind of superhero.  These Ultramarines are the Guardians of their world as the bleed, sweat and live all for their rank as a warrior.  There is nothing that matters to a Space Marine other than his duty to serve and protect his world and legacy.  Without a blink of an eye any of these warriors would take on any amount of enemies because that is what they are breed for and that is what they live for.  This is what makes them a Space Marine and it was very interesting to see this type of fearless warrior almost null of all emotion with one thing on their mind.  I have never played a Warhammer 40k, RTS game but I know there is a big difference playing a game where you send a squad of a hundred of them out to battle as oppose to being in the feet of one.  This alone can make it one hell of experience for veterans of the franchise as well as new comers. 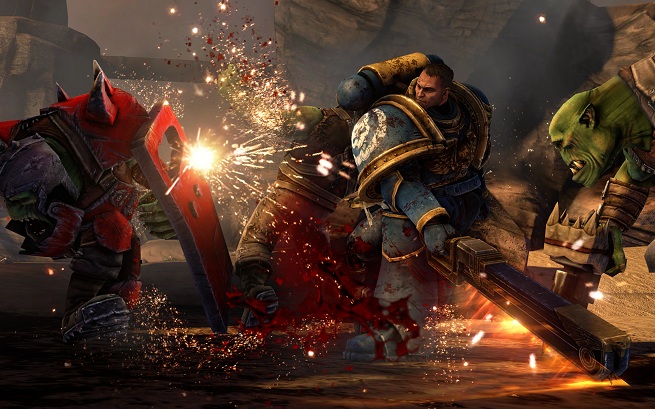 The story is action packed, however lacks a lot of story that would simply make other games amazing.  This surprised as the Warhammer franchise is not limited to games but has many, many books and novels.  Never the less the campaign was thoroughly enjoyable, especially considering there is much you can do in the campaign that you can not do online.  You will have things at you disposal that would not in multiplayer like holding on to multiple weapons and the shear fact you are not ‘a’ class but rather ‘the’ class during single player.  You can tell that developers, Relic realized this right away and it made for an extremely polished and balanced multiplayer.  There has been no patches to fix multiplayer, Relic obviously took the time to separate online and offline to make them two different elements, keeping both parts of the game fun as well as balanced.  In the campaign you have a slew of extra moves and abilities you do not have online, such as gruesome executions you can pull off on stunned enemies which might be one of the best things you would be missing out on, if you were playing a Warhammer RTS.

You take on the role of Captain Titus, in the campaign where the main mission is for him and his squad to be sent to a ‘Forge World’ to take it over as it is strategically well placed location for them to have control over.  First you are up against the ugly green Orcs any veteran to the franchise will know of.  The big surprise is when the Space Marines find themselves up against Chaos warriors on this world, which with out giving away any spoilers would not have normally been possible.  With the plan of attack changed, as it was only though to be an Orc inhabited world things get tougher and tougher for Titus as well as his squad.  Now a battle rages on for control of this place, having to battle Orcs and Chaos Soldiers.  You will even see both of your enemies duking it out a lot in which case you can site back and wait or dive in to a three way battle.  If you are on Hard you might want to hang back, as the Hard difficulty in this game is indeed hard,… very hard.  It all inevitably leads up to one epic boss battle that I will not spoil from here, but the real glory in the game is the battle. 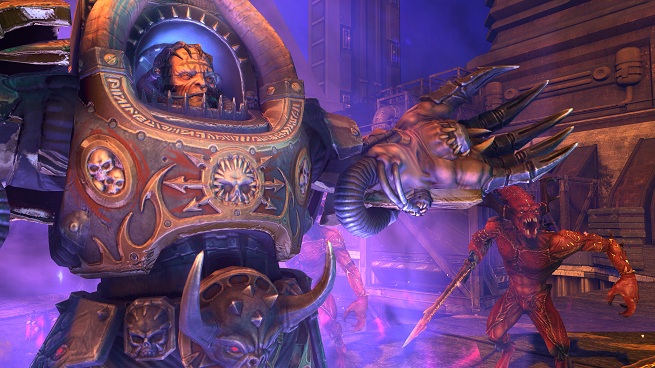 The mechanics in the game are slightly unique to any other game and can take a few moments to really get used to it.  Once you do, you are off for some action packed battles where the flow between swing your sword to shooting your gun feels quite natural as you become used to dodging/rolling away only to then activate your Fury (which is charged by killing enemies).  Using Fury makes all your attacks stronger as you gain health and when aiming with a weapon time is then slowed down to make crucial headshots.  Once your Fury bar runs out your back to normal play, where momentum is key to survival as this is not a cover based game.  Using everything at your disposal properly will make you unstoppable.  You can even bull rush, sprinting though enemies, stunning them and sometimes even killing them.  These are all aspects which fun to use but are not a part of the multiplayer at all.

When it comes to multiplayer, the Warhammer 40k franchise is only expanded here.  Customization and challenges are huge aspects of the multiplayer.  You can either play the Space Marine version of Team Deathmatch (Annihilation) or Seize Ground which a ‘Domination’ style game type where there are multiple points on the map that you team must fight for control over.  This is all done while either playing as Space Marines or Chaos Marines with there being 3 different classes to choose from.  There is the ‘Tactical’ class which is kind of an all around in the middle kind of choice, then there is the Assault/Raptor class in which you are equipped with a Jet-pack allowing to land on unsuspecting enemies to slash away at them with this class being the only one with the ability to wield a Sword, Axe, Hammer or if you played the Warhammer 40k: Kill Team arcade game, the Power Sword, which currently is the only way to unlock this weapon.  The final class is your heavy one, which is the Devastator/Havoc class and is made to take a beating as they are slow but pressing the reload button will instead put you in a stationary squatting position to use your heavy gun more powerfully killing enemies with just a few well place bullets. 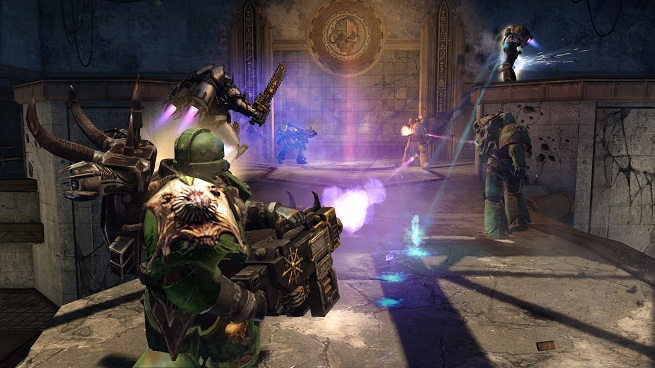 Now as far as Customization, it is nearly endless and ties in with the challenges as well.  Right away you can pick a Space Marine Chapter/Warband to set your Marines color scheme which there are many of.  From there you can choose to change the entire armors sets color, from primary color to, secondary, to detail or change single armor piece colors.  Before or after you do this, you can also customize what kind of armor you are wearing as you may have an entire armor set unlock (one from completing the game) or you may just have pieces unlocked, but starting off you don’t have much.  This is where the challenges come into play, as you might have to win a certain amount of matches as a Space Marine or get a certain amount of kills as one to unlock an armor set or armor pieces.  There are also challenges for literally anything you can think of.  Just dying 50 times by explosives will complete a challenge giving a boat load of XP as well as unlocking a unique piece of armor.  So as you can see whether you do good or bad there is always something in it for you.  Every Challenge gives you XP, but might not unlock anything.  There also weapon challenges as well, which upon getting a certain amount of kills with a weapon will give you XP and might unlock a new perk for that weapon.

There are also basic perks that are more relevant to your class, which unlock by simply gaining levels.  You can only equip one perk until you reach level 15 which will let you equip a secondary perk.  You can also have either Grenades, Blind Grenades (Blinding Enemy) or Combat Stimulants which give you ‘Temporary damage resistance and increased close-combat damage’, are the last ones worth it?  I gonna go with a no.  There are 41 levels in multiplayer and of course reaching the highest level gets you one bad ass set of armor.  It is not hard to level up in the game though considers there are challenges for dying, getting killstreaks and there are Skill Bonuses for things like getting a headshot, shooting an enemy out of the air, while assisting your team as well as capturing points are all helpful to gain levels.  A total of 11 different guns are available depending on what class you are. 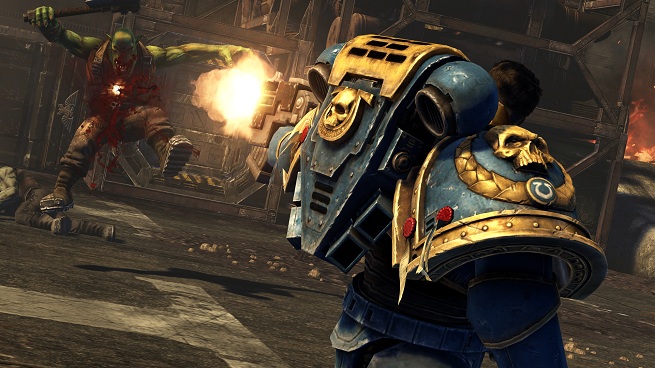 Straight to the chest!

You will see quite a wide range of unique customized players online, giving you new ideas as well as the copy load out option available from the last person that killed you.  You also have a choice of instantly spawning in a ‘somewhat’ safe zone or waiting on a short timer to spawn on one of you team-mates which can be a tough decision and at times even critical.  All in all Warhammer 40k: Space Marine sees its glory in the multiplayer action, along with the free 1 to 4 player co-operative mode they are adding in October promising new weapons and the ability to level up in this mode.  Being able to see the Space Marines battle scars and medals during the single player portion of this third person masterpiece also helps bring the world of Warhammer closer than it has ever been.  The games screams for constant DLC as if would fit quite perfectly in this one of a kind chapter of Warhammer 40,000.

You really get to see up close the day in the life of a Space Marine, while online multiplayer in nearly impeccable, fun and will give you an almost endless sense of customization.

I would have expected a much deeper storyline from a franchise that has so many novels and past games.

Fantastic third-person shooter/hack n slash/i don't even know kind of game that is unique to anything I have seen before bring the Warhammer 40k franchise closer than ever.