If the recent slew of motion controllers and plastic instruments is anything to go by, it just shows that the gaming public are suckers for new peripherals. It is thus that I recall a giddy excitement when I saw We Dance show up, complete with dance mat in tow. The mat felt just as I remembered, but the game is all kinds of terrible, and bastardises the memories I once have of classic dance machines in the arcades.

The core idea is the same as always: Dance along to your favourite chart hits to rack up big points, alone or with friends. The dancing itself though is hollow and unsatisfying; a horrid start for a game that falls neatly into the “dance” genre. The game offers the usual difficulties of easy, medium and hard that make you dance with either your hands, feet or both at the same time respectively. This is where all the problems start, but let’s just break it down for now. 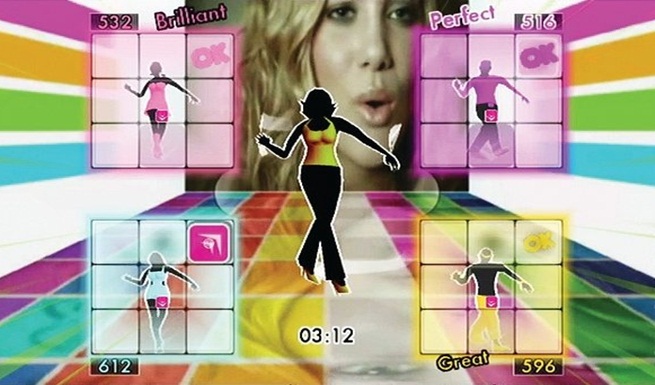 Some Wii dance games can get away with it but, generally, the Wii remote is a tool that just isn’t accurate enough to represent complicated and intricate dance choreography. We Dance is a particularly bad example, to the point where I was able to rack up far too many points by flailing my arm around at random. Hell, that actually nailed me more points than playing the game properly when I was on the easy mode, demonstrating just how poor the game’s motion detection is. These sorts of gesture based control schemes also go against the rhythm party game’s core ideal of being able to jump straight into the game. Other titles like Dance Dance Revolution use a descending series of symbols that allow you to anticipate what moves you need to perform next, and We Dance’s lack of such an advanced warning means you always feel like you’re one step behind. You can always go to the Dance School mode and learn the routines but, not only does this seem to go against every convention laid out by the rhythm action genre since its inception, I found the way you learn moves to be very confusing. It wound up doing more harm than good to an already failing attempt at a dancing game

This is where the dance mat comes in, although it doesn’t save the game in the way you’d hope. Bravely opting up to the medium difficulty, players can drop their controller in favour of some floor space. The mat peripheral provided feels a bit flaky at times, but is of a solid enough and responsive construction. It plugs easily into one of the Wii’s Gamecube controller ports, meaning the usual issues of syncing up wireless equipment are thankfully absent. The actual dancing mechanics lack any real clout however. Rather than the descending symbols used in other games in the genre, We Dance shows a grid in the bottom left of the screen with symbols growing in size until they overlap their respective portion of the grid. Each position on the grid corresponds to a certain direction on the mat, and the symbols are helpfully coloured to show which foot you should use. Whilst it sounds good on paper, it isn’t quite so in practice. The way the symbols approach the grid leaves the timing with a feeling of ambiguity, and the way steps are charted often defies logic. Back beats are thrown in just to confuse you, steps don’t often make sense and occasional slips of three footed dance moves completely defy human biology. Maybe I’ll enjoy this element of We Dance when Darwinian evolution kicks in and I sprout a third leg out of necessity (no penis jokes please) but, until that day, it just baffles and astonishes. 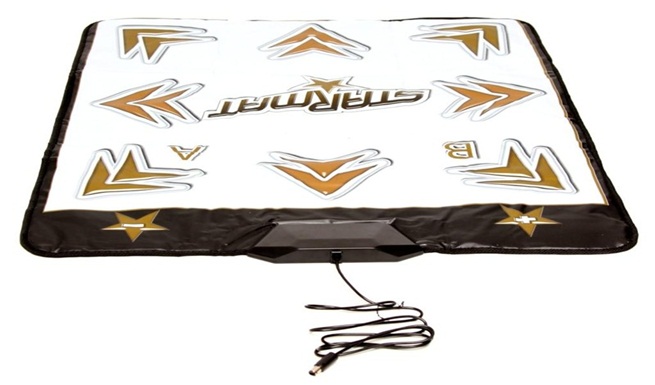 The dance mat peripheral is pretty decent at least

The hard mode is up next, cruelly throwing the two modes of dancing together. It is near impossible to get your head round it, and the game’s lack of immediate feedback on your relative success or failure leads to a hollow experience all around. I was impressed by the attempt to vary the dancing methods available, but each three modes should have had their own sub-difficulty levels to build players up more gently. As it is, the difficulty curve of We Dance is bizarre, with some songs being near impossible in comparison to others. Some kind of difficulty rating system may have rectified this, but alas it seems that such a foresight was not used.

Whilst the gameplay might not quite be up to scratch, the soundtrack is surprisingly competent. Considering the game’s lacklustre and static animations and disconcerting grammatical errors from the get go, I assumed the soundtrack would follow in the suit of such low production values. It wasn’t to be so, with a bunch of songs that you’re actually likely to know, spanning a variety of genres and decades. Any game that has Eye of the Tiger as a track instantly gets a thumbs up in my book, and there are many other songs that are likely to get people up on their feet, regardless of musical taste. 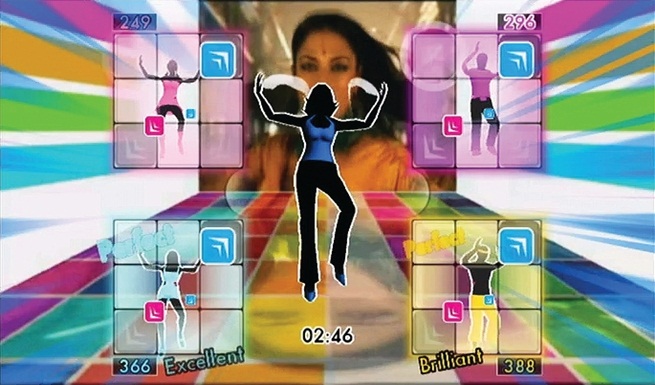 The shadowy dancer you’re supposed to follow in the background has rigid and stiff animations. Not exactly conducive to any serious boogying

As far as lifespan is concerned, things are bleak for We Dance in comparison to other contemporary titles in the rhythm genre. There are enough tracks on the disc to keep things going for a while but, though there is a DLC store available for those who are willing, there aren’t many tracks going up at all, and they are overpriced as well at nearly $3 for a track. There are a few party mini-games on offer, but they all suffer the same fate of being hideously boring. One is just stepping in time to music, otherwise known as dancing, which I’m pretty sure you’ve just been doing in the main game. Jump sees you jumping, which apparently translates to holding your foot down and releasing it. If you’re going to use motion controls, you need to go the whole nine yards and not flake out when it comes to jumping manoeuvres. The final pose game is running followed by a specific step. Not great, but not terrible either. They bolster out the package somewhat, but are unlikely to get played more than once or twice, even with a large group of players.

Despite a reasonably promising peripheral, We Dance is completely outclassed as a rhythm game. Whether it be specifically on Wii or on any other format, We Dance falls flat in comparison to its competitors in terms of style, content and accessibility. Though it has a decent and varied list of songs to shake your stuff to, the gameplay does not sustain the high quality of the game’s music. Even though it retails for a fairly reasonable price, We Dance is not a sound investment for anyone wishing to break into the rhythm action genre. You’d be best advised to stick with Just Dance or Dance Central for Kinect for your general booty shaking needs.

The dance mat peripheral is decent enough, The song list is varied and good all around

Final Verdict:
POOR
A brave attempt to merge the older generation of dance mat titles with modern motion controlled games, We Dance fails in most of its ambition, creating a hollow and dull experience that is only brightened by a fairly good list of tracks
A copy of this game was provided by Developer/Publisher/Distributor/PR Agency for review purposes. Click here to know more about our Reviews Policy.