Wet is centered around Rubi, a women who basically does some wet work for the mafia. The game begins with Rubi overlooking a meeting which is taking place between a disabled man and a gangster named Simmons. The meeting is all about a case which contains a human heart. Rubi has been hired by Trevor to steal that case and bring it back to him. Trevor wants to actually save his father William Ackers who is fighting for his life in the hospital. Rubi gives Trevor the heart and saves Acker’s life. After a year later in Texas, Acker comes to visit Rubi concerning his son Trevor. Trevor has now joined a drug dealing group in Hong Kong and Acker wishes that he should be brought back to him. After fighting a series of battles in Hong Kong, Rubi finally gets hold of him and returns him to his father. Just when she is about to leave Acker’s place, Acker decapitates Trevor, seeing that Rubi is now a witness to the incident Acker orders Ze Kollektor to fight her. Rubi is defeated and finally wakes at Milo’s place. Rubi now vows revenge against Acker and this is all about the plot. The plot could have been much more better. But there are certain potholes where I continuously found myself to be quizzed. 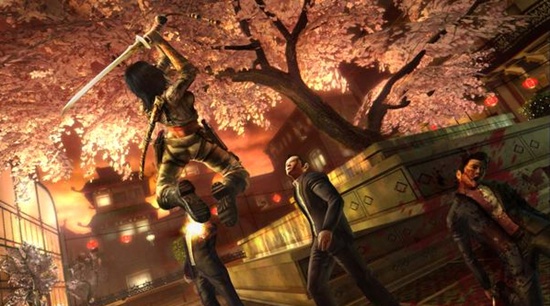 Welcome to WET, the world of acrobatics and shooting!

Now lets talk about the gameplay. Wet is really a good combination of Mirrors Edge and Prince of Persia. At first I really thought that I am not playing as Rubi, but I am playing as Faith since they look pretty same and have similar acrobatic abilities.Rubi can swing around around poles, can run sideways on the wall, perform some really amazing moves like sliding and jumping in the mid air. WET is really all about shooting. You can mix your acrobatic moves along with shooting. When you do that the screen will slow down so that you can fire a good amount of bullets at your enemies. Almost every acrobatic move can be bundled up with shooting. Rubi can shoot while she is jumping, sliding or running on walls. You will have a couple of guns at your disposal too like the standard pistols ( Lara Croft style), shotguns and a machine gun. You also have a sword at your disposal too. And I found this to be my favorite weapon. I found it pretty easy to slash enemies and take them down pretty quick. But there are some who wont go down with the sword. These guys will carry heavy machine guns. But as I said just like the other guys they are easy too but they will need more bullet shots to take them down. There are also a few moments where a guy will come towards and Rubi will shoot at his face which will make her angry and make the screen go red. This is the mode where Rubi will take on tons and tons of enemies. Overall I found these sections of gameplay pretty fun. Also the player has to clear areas from enemies and for that Rubi has to take down the entry points so that more enemies don’t pour in. Also players can upgrade their moves and guns at the end of each mission. There are several times in the game where there are car chases in the game and most of the gameplay looks like a rip off from The Wheelman, a game which was released earlier this year. Also there are training missions in between where you can learn some platforming and gunplay tricks. 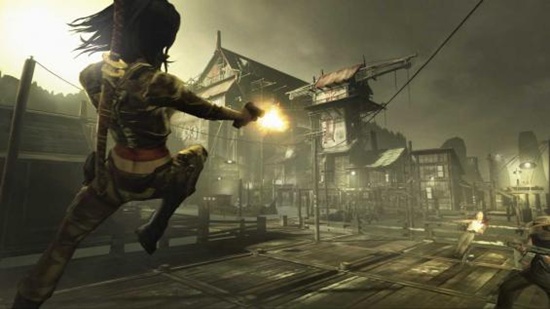 Shooting along with some cool acrobatics is fun

Platforming sections have been done pretty well and overall level design is very good. Camera is sharp and keeps the focus on action almost every time. The graphics for the game are average. The visuals are dated and the character models except Rubi are last generation. There is also a silly scratch filter which will make the game look like a 1970’s game but its irritating and I switched that off. Some of the indoor sections were pretty detailed. The real bright point of the game is the sound. If you are a fan of some hip hop and techno music than you are going to love the music of WET. Voice acting is pretty cool for most part but it could have been a lot better. 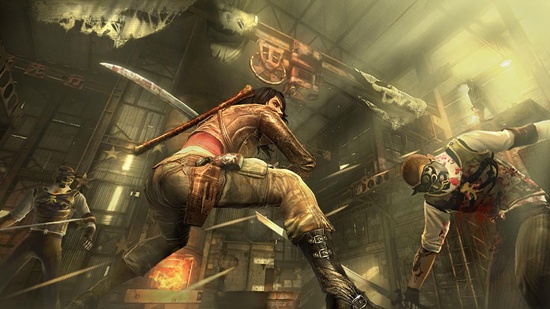 Wet is a game that is not meant for everyone. Certain scenes are pretty violent and gory in nature and the language used in the game is cheap. And that is what makes Rubi an interesting protagonist. If you are a fan of hack n slash along with an appetite for some really cool moves than you should probably rent this.

Final Verdict:
SUPERB
WET is really a combination of many games like Mirrors Edge and Prince of Persia but in a pretty good way.
A copy of this game was provided by Developer/Publisher/Distributor/PR Agency for review purposes. Click here to know more about our Reviews Policy.