Need an example of a game in which the overall concept is top notch, but the game is bogged down by poor execution ? Than a very good example could be Wheelman. In Wheelman you will be driving cars , killing people and fighting off against gangsters for no reason…or in other words why you are doing all the driving and other activities isn’t truly explained in the plot.

The only one conclusion that i can give about the story is that Milo , the game’s protagonist is continously switchingbetween the three major gangster’s group which are occupying different regions in Barcelona, Spain. Having said that , The WheelMan does provides plenty of thrill elements which feels like you are not playing a game but are watching a summer blockbuster movie. The game is open ended with the player allowed to roam everywhere and anyhwere , however none of the buildings found in the city are interactable which was found in Grand Theft Auto 4 in some cases. So basically in short the roads are open ended rather than the city itself being open ended. 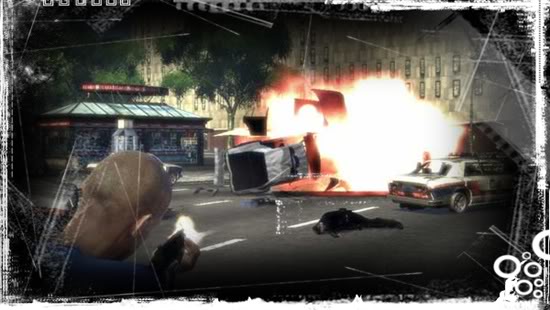 Now let me talk about the main protagonist, Milo. The character has a pretty strong presence throughout the game and can really do some special moves. While you are driving you are able to perform ” Air jack” , means basically you will be able to change your cars while driving. Proper button timing is important to execute it. Also introduced in the gameplay mechanics are the slow motion moves. There are two types : Cyclone and Head On. When you execute the head on, the camera swicthes inside the players car and than the character is able to shoot the sensistive parts of the enemy or the vehicle, but from behind. In cyclone mode you are able to do the same thing but in an action oriented way , Milo will spin his car 180 degress and will shoot the cars behind. Such moves really look that they have been taken directly from an hollywood action film.Also you will be able to drag you car left and right and will be able to to take out the enemies “Burnout” style. The enemies will be going all out at you during the chase sequences , they will be agressive and will always be able to take you out. Also you have to take care of the oncoming traffic. Being an expert in driving, you will have access to an “n” number of cars like Scooters, MotorBikes, Vans and even the huge Transport vehicles. Now the lets talk about where the gameplay fails. The on foot mechanics are terribly implemented eventhough you will have at your disposal, weapons like handguns, machine gunes, sub machines guns, shotguns and even RPG’s. The onfoot combat just doesnt feel right and it shows developers have just rushed to make this game ready for launch. Having said that the vehicle sessions have been done very well, with almost 50 chase seqences in the main plot and it doesn’t get old. 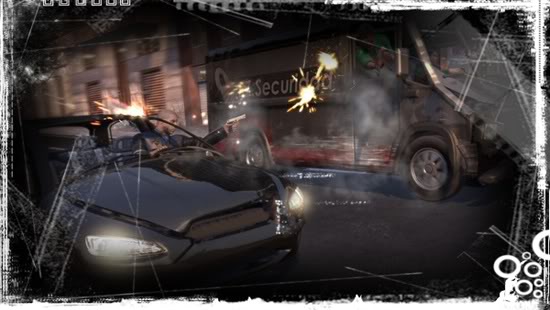 Visuals wise, the city of Barcelona has been beautifully rendered and is a treat to look at. The character models and some of the animations are just bland. The only character model that was good was that of Vin Diesel.The sound for most part of the game is OK, The music really mixes up with the action really well. But some of the dialogues and voice overs feels a bit out  of place.

Wheelman is a great accomplishment for an open world racing and an action game. The world of Barcelona is full of destructable objects, alleyways, shortcuts through office blocks and a total of 31 story missions and 105 side missions. The single player campaign will take you about 8 hours to complete. After you are done with it, you can take up side missions like racing and taking up contracts from your client.Wheelman feels like an Hollywood Summer blockbuster movie that can satisfy any hardcore action fan, but its awful plot and on foot combat is a big let down and really takes away alot from the final score.

Awesome Driving and Chase sequences, Aftertouch moves are a lot of fun and never gets old, Vin Diesel

Plot is horrible, Badly implemented on foot combat, In game dialogue feels out of place

Final Verdict:
GOOD
Wheelman provides plenty of fun and action oriented driving sequences but its poorly executed plot and combat hurt the gameplay.
A copy of this game was provided by Developer/Publisher/Distributor/PR Agency for review purposes. Click here to know more about our Reviews Policy.