A perfect game for a large group of people.

Wii Party U is a game built from the ground up to take full advantage of family gatherings and hanging out with friends. It caters to younger audiences as well as an older crowd and and has an interesting way of making use of the Wii-U’s Gamepad. Wii Party U houses an incredible selection of cataloged games that are designed solely around group entertainment and enjoyment.

Offering up to three main game modes with a selection of mini games on the side, Wii Party U can be praised for its success of curing boredom and having a great time. Each of these four main modes explain their differences from the main menu, and further down the line when you’re introduced to the roster of games each one has. Each game provides three levels difficulty and feels exactly as described while remaining in the borders of a fair challenge.

Wii Party U also requires the use of a Wii-Mote per person along with the Wii U Gamepad being shared amongst the crowd. This is an example of good design practice and as one could imagine the expense of a Gamepad per-person would be be off putting to its audience, not to mention a surprising kick in the teeth. But this decision in control structure doesn’t hinder in anyway the creative efforts that exists within its library of games. 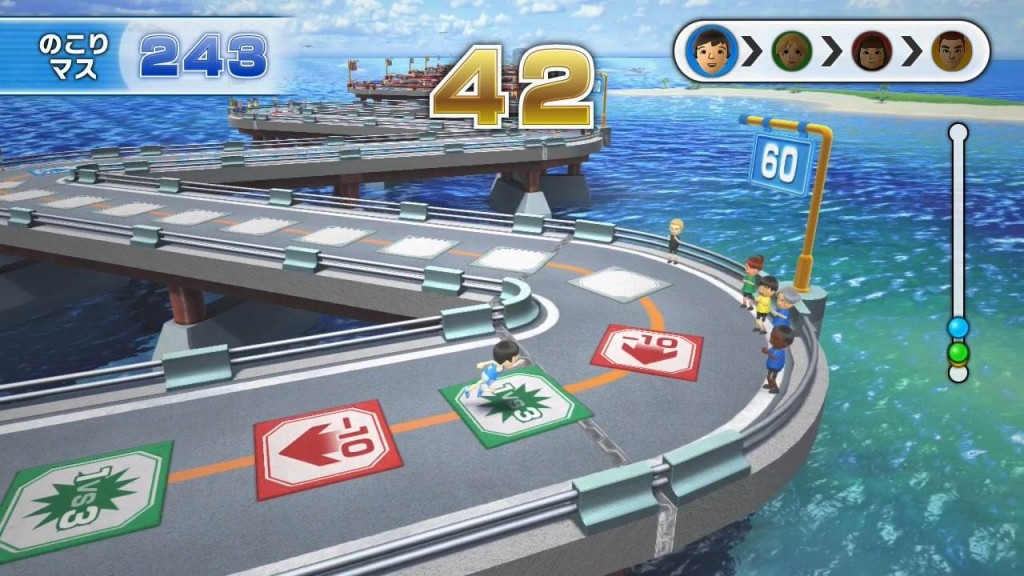 "Games such as Tabletop Football and Tabletop Baseball bring back memories of the original Nintendo Wii's Wii Sports. Other additions such as Mii-in-a-Row and Tabletop Gauntlet are welcomed and received gratefully."

GamePad Party allows you to play with a friend directly on the Wii U GamePad. This does well in changing up the traditional way in which we play games rather than most which simply imitate the TV screen. It’s a simple yet greatly executed idea that brings traditional board games and video games to a meeting point where all requirements are met. It feels nostalgic in a way and I’m sure many people can relate to this. Games such as Tabletop Football and Tabletop Baseball bring back memories of the original Nintendo Wii’s Wii Sports. Other additions such as Mii-in-a-Row and Tabletop Gauntlet are welcomed and received gratefully.

House Party takes into account the space of your room and provides you with games more orientated around bigger spaces. Folk Dance Fever is a four player game in which the GamePad works as a synchronization tool to track the player as they dance in co-ordination with the game. One of the problems with this as with a number of the other games provided, is the tracking and location of the required Wii-Motes which must work in combination with the GamePad.

Another game that lies within this section is Lost-and-Found Square. Using the GamePad players must find each other’s location by moving through a small made up area, but must do so in steering the GamePad in the space around their room. As the player’s concentration is reliant on the GamePad, the TV screen works as a four-way mirror to provide the audience with entertainment. 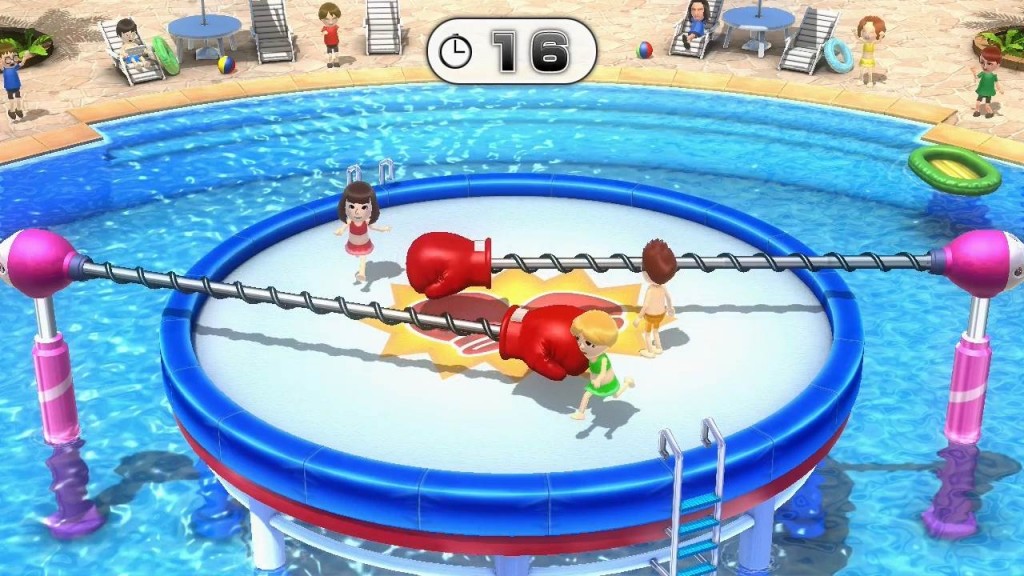 "Wii Party U was clearly designed to be a cooperatively played game and while it works fine in single-player, it's not where its strengths or appeals lie."

What’s remarkable about each different game mode is their ability to remain fairly distinctive of one another without lacking or falling short of enjoyment. TV Party places a focus on combining its mini games with those similar available in the other modes. Highway Rollers, Gamepad Island, and Mii Fashion Plaza take note from board games and require you to roll a dice in order to progress through a platformed board game, built up of one of it’s worlds. This dice throws are split up amongst each other whereby you must compete in a mini game before further making your way back on to the main board.

Mini games is designed to work as a striped down version of those similar to the game’s three modes. While this is great in idea it feels unneeded and would have been better implemented had it’s game selection just been divided amongst the other three. One of it’s choices appropriately titled Minigame Collection allows the player to one of the mini games and play solo or cooperatively and works as a practice mode.

Wii Party U was clearly designed to be a cooperatively played game and while it works fine in single-player, it’s not where its strengths or appeals lie. Only a handful of the games are made available in single player and it would have been better off had the game not offered this at all. The mode feel boring and lonely and is not in anyway ideal for someone playing alone. 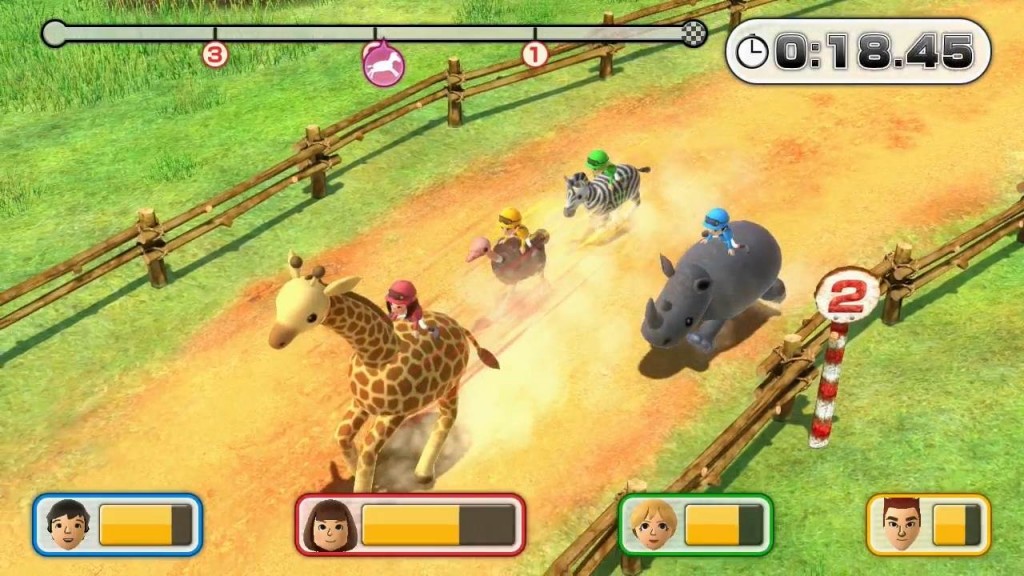 "This is where people have a problem in appreciating some of Nintendo's best games, because they're still holding out for that "Visual Statement" which shows off the Nintendo Wii U's true power capabilities. Meanwhile great games such as this are being overlooked."

Like the majority of Nintendo’s games, Wii Party U emphasizes its use of colour. Wii Party U possesses a colour palette that would do well to describe itself as Pop Candy. Everything appears bright and crisp, and the 1080p resolution really makes its presence stand out. Now granted this isn’t a visual benchmark in giving people a level of over-the-top special effects, it’s not meant to.

This is where people have a problem in appreciating some of Nintendo’s best games, because they’re still holding out for that “Visual Statement” which shows off the Nintendo Wii U’s true power capabilities. Meanwhile great games such as this are being overlooked. Wii Party U is a perfect game for a large group of people. It brings back memories of television commercials for family oriented board games and does well in delivering that feeling into a modern-era.

It also implements the style of games like those found in an arcade or fun fair, but doesn’t in anyway hinder the type of experience it’s going for. One thing that will stand out in its glorious selection of games, and in more so than others, is a slight feeling of not being  in control or simply relying on luck. This minor issue isn’t by any means a game-breaking bug nor should it destroy an enjoyable experience. It’s just more noticeable within certain games and when playing as a group shouldn’t make you feel cheated.

A large selection of games and very good design decisions demonstrate a significant amount of creativity.

Certain instances of tracking and setting up a game can be a nuisance but not in anyway off-putting.

Wii Party U may not do well in catering to standalone players but family and friends will have a lot of fun with it. It would be interesting to see if future content or a sequel is heading our way and how it can be innovated upon.

A copy of this game was provided by developer/publisher for review purposes. Click here to know more about our Reviews Policy.
Tagged With: Nintendo, Wii Party U, wii u