Team 17 hit their peak in 1999 when they released Worms: Armageddon, the sequel to the sleeper hit Worms and Worms 2. Whilst the original was criticised for a limited weapon arsenal and barely visible character sprites, Armageddon made the graphic style bigger and better and added a whole heap of classic armaments. Over a decade later Team 17 have seen fit to release Worms: Reloaded, an expansion pack to Armageddon. It seems though that in 11 years they’ve had no new ideas as, apart from a handful of weapons, there’s little difference between the two titles.

The main premise is just as you may remember it. You take control of a team of four worms, as they battle opposing groups with various weapons, explosives and martial arts. The gameplay hasn’t changed much over the years, but this isn’t necessarily a bad thing. The later games in the series tried to change the formula too much, but Reloaded is the classic 2D gameplay you know and love. 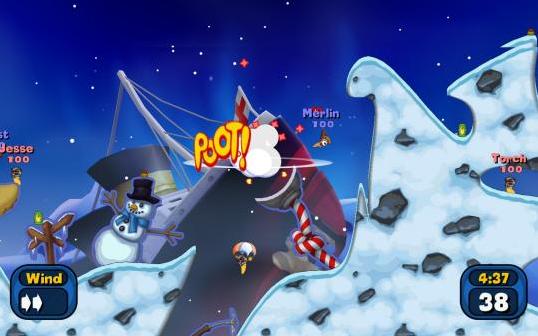 The gameplay is just as good as you remember it

The problem with the game comes in the idea of Reloaded being an expansion, as there just doesn’t seem to be much expanding going on. There are are a handful or new weapons, but they are largely just re-hashes of old favourites like the poison air-strike and the super sheep. The only meaningful addition to the arsenal is the sentry gun that can be used to defend certain portions of the map, but this was also achievable through the clever use of mines in previous iterations of the game

The main difference on offer is probably in the single player campaign modes. That said, when nearly all the levels revolve around “kill the other team” objectives, the differences once again seem minimal. There are a few puzzle maps that task you with getting your worm from A to B, which is a nice touch, but this new level focus was sadly underused. The warzone campaign is a new addition, but is basically just a slightly harder variant on the standard single player formula. I’m certainly glad it’s there, but it doesn’t really warrant too much fanfare. The main new mode on offer is body count, which sees your team fighting waves of re-spawning AI adversaries for points. Leaderboard climbing gives an addictive element to the mode, but it’s still just a case of killing everyone. 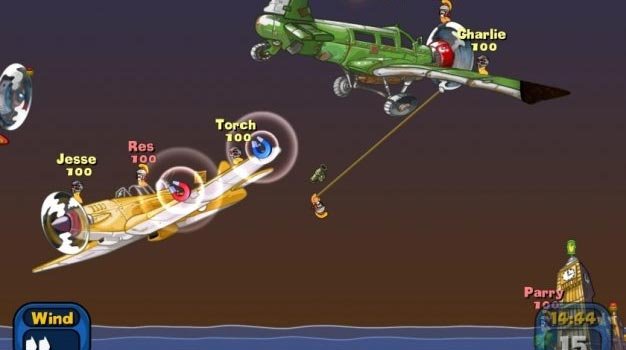 Randomly generated maps are a welcome staple of the series

The multiplayer is still where Worms is at and Reloaded is no exception. The inclusion of online ranked and player matches complements the local versus modes well, but it’s hard to tell if this is a new feature as such, having been included in the XBLA and PSN reboot of Worms: Armageddon. It’s still good fun either way and the different weapon sets and randomly generated maps make this a varied blast for you and your friends.

The customization options are back as well, with a custom team of worms still being usable in all the modes. The amount of different hats, forts gravestones etc. you can use to give your team an added flair is truly astounding. It’s just a shame that the new additions couldn’t have been more than just a visual delight. Upon clearing single player challenges you gain coins that can be used to unlock new weapons and apparel for your team. It’s a nice touch for sure, and adds reasonable incentive for playing solo.

The presentation too has seen few changes over the years. That said, I think this is for the better as Worms: Reloaded is able to retain the same magic and charm that the series has always been renowned for. The worms still have that cartoony glow, in their weird and wonderful picturesque landscapes. They still have those same voice clips (which are now customizable as well) and the weapons still sound just as you want them too. No matter how you look at it the game has a unique style that is very well executed. The problem, in terms of sound, rears its ugly head in the form of a rather frustrating glitch. When attempting to run Reloaded on my laptop I found I couldn’t get any of the sounds to play at all once I launched the game, and I’m certainly no philistine when it comes to technology. It was nothing a quick change to my PC wouldn’t fix, but it’s certainly noteworthy if this kind of glitch is in the initial build of the game. 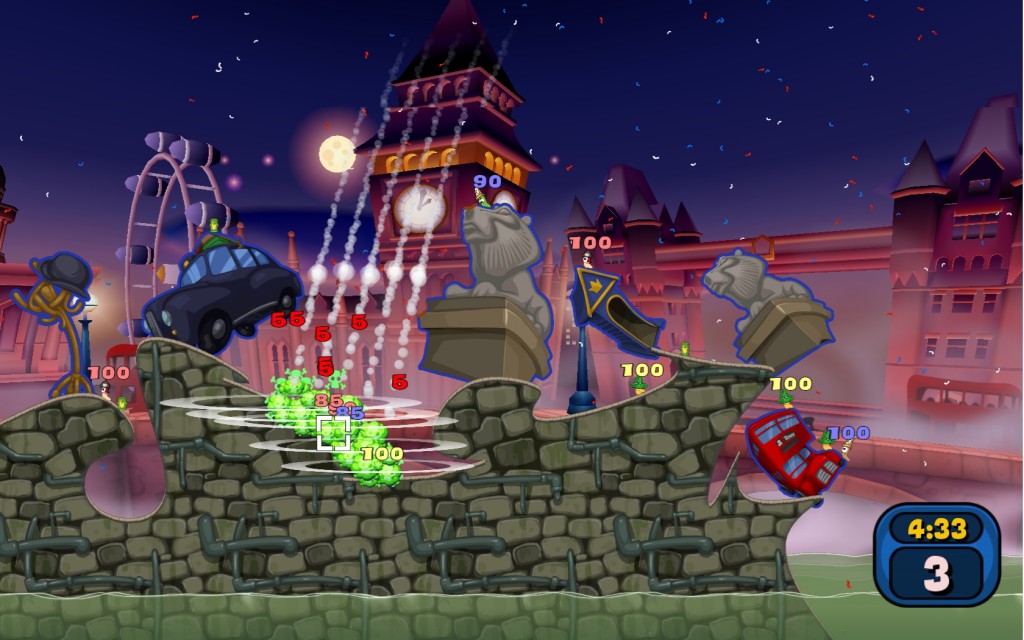 They’re still worms and they still shoot each other. Not a lot has changed in 11 years…

Being geared toward multiplayer shenanigans, Worms: Reloaded is a game that is built to last and this is certainly aided by the vast choice of weapons and the randomly generated maps. For the single player things aren’t so good. The campaign has 30 levels, but when each only lasts an average of five minutes it’s unlikely to hold your interest for long. The achievements are quite enjoyable to collect, encompassing all the modes and a variety of weird and wonderful feats.

Worms: Reloaded is a lot of fun, of this there is no question. The low score then comes from the sheer lack of advancement that has occurred between the original and this expansion. If you’re a newcomer to the magic of worms then I would highly recommend Reloaded to you, but if you have any other version of Armageddon on any platform then your money will be better spent elsewhere.

Severe lack of new content, Learn by death gameplay can be frustrating, An odd sound glitch that prevents audio from playing

Final Verdict:
FAIR
Worms: Reloaded serves as a sort of expansion pack for the classic Worms: Armageddon, but with such little content added one must wonder what Team 17 have been doing for the past 11 years
A copy of this game was provided by Developer/Publisher/Distributor/PR Agency for review purposes. Click here to know more about our Reviews Policy.