Arguably the best edition of the Worms franchise makes a return.

Worms can live for up to 10 years. It’s a fact – I looked it up. Worms that reside in the cartoony confines of Team 17’s latest offering, however, seem to last little more than a couple of minutes before their demise.

The cute annelids that populate the colourful world of Worms World Party Remastered aren’t exactly typical though… these critters come armed to the teeth, boasting an array of weaponry that would make a small rogue nation proud.

In this remake of the uber-popular 2001 classic, you take control of a team of worms with a simple premise: kill the opposition before they kill you.

This 2D turn-based strategy game – arguably the most popular entry of the series – returns with all the game modes, options and weapons of yesteryear but complete with additional Steam achievements, leaderboards, cloud saves and full controller support!

Not only that, but the visuals have been revamped too. You could argue that the Worms series is perhaps the least likely to ever need souped-up 1080p graphics at 60fps but nonetheless, that’s exactly what you get with this package. It results in some great looking backgrounds, nicely-animated worms and some smooth animations when all hell breaks loose. 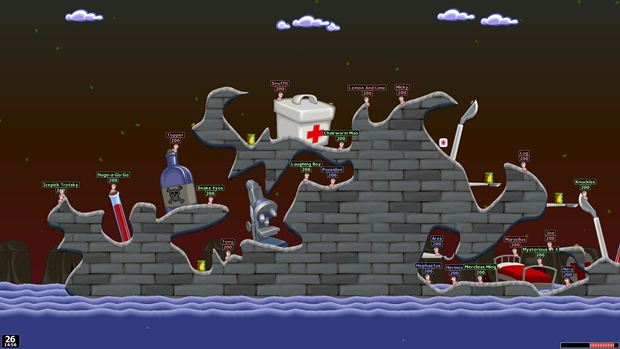 "From missiles and Uzis to homing missiles and exploding sheep, there is plenty in your arsenal to keep even the most bloodthirsty of gamers happy."

But it’s not the graphics that the real fans care about, is it? It’s the guns that matter; those fiendishly inventive weapons of destruction that transform otherwise docile creatures into lean, mean, killing machines. And there of over 60 guns, explosives and projectiles available!

From missiles and Uzis to homing missiles and exploding sheep, there is plenty in your arsenal to keep even the most bloodthirsty of gamers happy. The devastating Holy Hand Grenade remains a firm favourite as is the stink-ridden skunk bomb that roams the landscape spraying his deadly scent. Then there are the napalm strikes, cluster bombs and the indefatigable Concrete Donkey…

Worms are clearly not most agile of creatures. They can’t jump over anything more than a small gap, climb or do pretty much anything at speed… so it’s a good thing that there are also plenty of abilities on offer that make them a little more mobile. Teleporters allow them to magically reappear elsewhere on the map, whereas jet packs, bungee ropes, pneumatic drills and other goodies allow them to move elsewhere and worm their way (get it?) into the perfect sniping position.

It’s all very simple to pick up and play but tricky to master, as each of the weapons and abilities need a little trial and error to maximise their effectiveness. It means that many of the worms under your control will be little more than cannon fodder when you first start to play. Match up against an equally-inept opponent and you’ll quite literally have a blast but face off against someone who knows what they’re doing and you’ll be hard pushed to muster a victory.

You can play with friends locally or online with single and multiplayer modes catering for up to six players. Whether you want to dive in and have a quick skirmish or try your hand at one of the 20+ multiplayer missions, there’s plenty to keep you occupied. 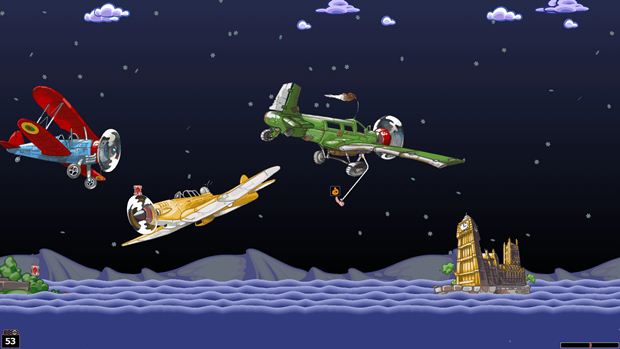 "So is it worth buying? If you’re a fan or have never played it before, then Worms World Party Remastered is an absolute blast with a few friends or a well-matched opponent online."

The “Wormopaedia” button (think Wikipedia but for weaponry) is on hand too to help you learn about the many guns and explosive accoutrements available and gain some tips on how to maximise their impact.

Pretty much everything is customisable, with numerous options screens letting you tinker with the maps, timers, weapons and teams. You can determine how much health your worms have, match time limits and even the sudden death rules. Best of all though is the Terrain Editor, which effectively opens up an integrated paint program with various tools to design the ultimate playspace. Numerous templates are available to get you started and then it’s just a case of tweaking as much or as little as you’d like.

So is it worth buying? If you’re a fan or have never played it before, then Worms World Party Remastered is an absolute blast with a few friends or a well-matched opponent online. Remember though that there’s little that’s new content-wise with this update. Sure, it looks a little crisper and the leaderboards and use of a controller are very welcome, but there’s nothing else that really affects the gameplay and experience. If you’ve played the original – or the many follow-ups – you may question whether it needed a remaster at all. Still, it remains a good package and provides plenty of entertainment for a reasonable price.

Revamped graphics, controller compatibility and leaderboards give a modern slant to a classic game. Terrain Editor, along with the online and offline multiplayer options, provides longevity.

Did it really need a remake? Gameplay is unchanged.

Worms may not be too everyone’s taste – and certainly loses some of its appeal if you play solo.

A copy of this game was provided by developer/publisher for review purposes. Click here to know more about our Reviews Policy.
Tagged With: pc, Team 17, Worms World Party Remastered